What Scares Me by Teresa Noelle Roberts (@TeresNoeRoberts)

Witches’ Waves, Book 4 of my paranormal romance series Duals and Donovans: The Different (this is actually the fifth book set in this world, but one, Fox’s Folly, is a prequel to the rest), is all about witches and shapeshifters, or as I call them in my world, duals. The most terrifying thing in the series, though, is a creation of ordinary humans: the Agency, put in place to combat dangerous paranormal (“Different”) activity, but now a force for repressing all non-humans and humans with paranormal abilities.

I suppose this says a lot about what frightens me in real life. OK, I admit I won’t watch The Walking Dead because zombies freak me out. But for the most part, the stuff of horror movies doesn’t make me bat an eyelash. Ghosts? I’m pretty sure I’ve encountered a few. Two seemed sweet, melancholy and lonely, more touching than frightening. The other was a dead friend, still much as he had been in life. Creepy entities such as vampires or demons? I’ve read (and written) enough fantasy and paranormal romance books that I fancy I’d know how to manage such beasties. (Probably by running like a scared rabbit, since I don’t have a mighty magical sword or any sorcerous abilities.) Besides, they might be sexy, like in my favorite books. Magic? I’d love to experience it for real, after writing about it for so long. People being evil and dangerous to their neighbors out of bigotry, on the other hand? It’s all around us, it sometimes starts from lofty motives, as with the Agency, and it scares the hell out of me. The terrifying elements of horror novels always have a solution in the pages of the book. It takes people working together, willing to risk it all, to hold real-life, mundane evil, the kind of evil that thinks it’s doing good, at bay.

And ultimately, that kind of courage and ability to work together against evil is what Witches’ Waves is all about. Well, that, true love, hot ménage sex, the power of the ocean, beautiful bisexual men who love an ass-kicking blind heroine, and an adorable, potentially lethal infant.

You know, the usual stuff. 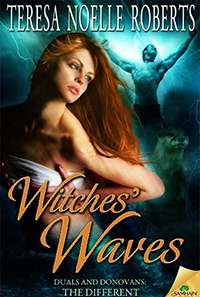 The ocean is on their side. But the fight is on land—and it’s about to get dirty.

Duals and Donovans: The Different, Book 4

Long held captive as the Agency’s secret weapon—a blind witch with visions—Meaghan has come to a line she refuses to cross. Rather than betray the infant “child of five bloods” to the Agency’s scientists, she chooses death. Except when she throws herself into the ocean, she doesn’t die. Her repressed water magic comes to life.

When the sodden, delirious witch drifts into Kyle’s arms, his otter dual instincts tell him to get her to the Donovans as fast as possible. Even though one particular surfer-dude Donovan broke his heart.

Declan Donovan continually kicks himself for pushing Kyle away, but his touchy combination of water, earth and lightning magic is too volatile, and Kyle wanted more than Deck was ready to give.

When they come together to help Meaghan control her new magic, it leads the Agency straight to the child of five bloods. They’ll have to dive head-first into total trust—in their magics, in themselves and in each other—to save the child and stop the Agency once and for all.

Warning: Contains an oceanful of sex between an ethereal blind heroine who swears like a pissed-off Marine, an overly serious otter shifter, a would-be beach bum who may be descended from a Norse god, in permutations as fluid as the sea – and themes of abuse and recovery.

Anger flared in Kyle’s dark eyes. “Trickster’s tits, Deck, she’s been in an Agency compound since she was little. I’m the first guy she’s ever met who wasn’t using her as a fucking lab experiment. Yeah, I’m intrigued, but I’m not going to go there. How the hell would she know if she’s really interested or if I just gain by comparison to sadistic Agency freaks?” He snorted. “She can’t even see my manly charms. She’s blind.”

Kyle was one beautiful man. But that serious, thoughtful tone behind the flippancy so natural to an otter dual took him from beautiful to damn well irresistible.

With each step forward, Declan told himself no. But he kept walking. It didn’t help that Kyle met him halfway.

Declan froze at the last second. He’d rejected Kyle once, run like a rabbit from something he realized too late he wanted. Just because Kyle was still attracted didn’t mean he’d want to take the chance of being hurt again, especially not with the lovely, mysterious Meaghan depending on him.

But when he opened his arms in invitation, Kyle was in them, pressing his slender, sinuous body against Declan’s more solid one, drawing him down into a kiss.

He needed. Lord and Lady, he needed. Something about Kyle made everything feel all right, made him feel like whatever challenges they faced, whatever the Agency might do, they’d be able to handle it.

He was pretty sure it wasn’t anything deep and metaphysical. He was on such a hormonal high that everything seemed like it was fine.

Kyle was in his arms, Kyle was kissing him, Kyle’s energy was caressing him everywhere and Kyle’s hands were doing their best to do the same. Declan slid his own hands down to cup the other man’s firm ass. With a muffled groan, Deck ground their crotches together. Arousal, sharp and hot and almost painful, shot through him.

Deck’s red magic was as squirrelly as his other powers, sometimes as erratic as a teenage virgin’s, sometimes nearly as strong as Elissa’s, though a lot more chaotic. Right now it was running so high the world turned red and crackled with energy, and they both had all their clothes on. Instinctively, he shunted the power the two of them were raising to strengthen Meaghan’s shields. The poor girl was almost as naked as a normy and more psychically open than his cousin Portia. At least Portia didn’t have seizures when she telepathically tapped into someone else’s thoughts.

Then Kyle’s hand snaked into his pants and Deck was glad that the red magic could do its thing without his brain involved now that he’d directed it, because his brain and his body both wanted to focus on Kyle. 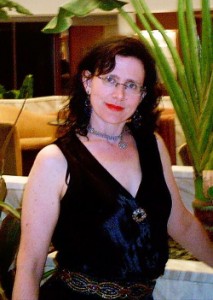 Teresa Noelle Roberts started writing stories in kindergarten and she hasn’t stopped yet. A prolific author of short erotica, she’s also a published poet and fantasy writer—but hot paranormals and BDSM-spiced contemporaries are her favorites. Or they were until she discovered that SF romance offers new possibilities for wild sex and imaginative adventure, so she’s added that sub-genre to her repertoire. Oh, and she’s also half of the writing team known as Sophie Mouette, writing mostly light-hearted spicy romances (with forays into erotica).

Teresa is a crunchy granola girl who enjoys belly dance, yoga, medieval re-creation, playing in the ocean, cooking, and growing more vegetables than she and her husband can possibly eat.  She’d enjoy sleeping, too. She thinks. But it takes so much time!

She shares her home in southern Massachusetts with her husband, a Leo in law enforcement, and two overstuffed cats. She and her husband often plan vacations around food, history, and/or proximity to water.

And check out her alter ego Sophie at www.sophiemouette.com.

2 Responses to “What Scares Me by Teresa Noelle Roberts (@TeresNoeRoberts)”