The Story Behind In His House of Submission by Justine Elyot

It’s a pleasure to have back as my guest on The Story Behind the Story one of my very favourite writers and an all-around fab person, Justine Elyot. Welcome back, Justine!

Here I am, taking shameless advantage of K D’s hospitality again, with a Mischief Petite Novel to tell you about.

It’s October now and the leaves are on the ground, but for this story we have to revisit the summer. I hope yours was a good one. Sarah’s certainly was.

In His House of Submission, history graduate Sarah Wells has taken a summer job archiving the antique treasures at the substantial home of famous film director, Jasper Jay. From the start, they have a shared passion – they both love things that have a past.

Are the passions that bind them together strong enough to withstand other forces in their lives that conspire to keep them apart, though? Here’s an excerpt:

I presented myself for breakfast in the kitchen in my usual long skirt and top-and-scarf combo. He stopped me before I sat down and asked me to show him my underwear.

I almost asked why, but checked myself in time. Instead, I silently pulled up my top and then lifted my skirt, my pulse racing. Despite the soreness below, I felt ready to take more of him, tingling with the shameful joy of submission.

‘Too much,’ he said. ‘Go upstairs and take it off. You aren’t going to need underwear for the next six weeks. Unless I ask you to wear it. Go on, then.’ He waved the spatula at me. I could imagine that being quite a useful spanking implement.

When I came back down, he beckoned me over to the counter, where he was buttering toast. With his other hand, he felt my breasts through the thin cotton top, rubbing at my nipples until they stood out through the fabric, bullet-hard and unmistakable. When that was done to his satisfaction, he lifted my skirt and checked for the presence of knickers. Finding none, he rewarded me with a luscious, filthy, grope-filled snog.

‘Sit down,’ he said, sliding eggs on to the toast before sorting out more coffee. ‘But you have to raise your skirt. I want your bare bottom touching the seat. And you can lift up your top too. And keep your legs wide apart.’

Sitting like that, with my top bunched over the top of my breasts and my thighs split while the varnished wooden seat chilled my bare bum, I couldn’t escape the reality of my submission. It was profound and absolute, and it was going to touch every aspect of my daily life.

Jasper watched me, smiling slyly, as he dug into his breakfast. I could barely touch mine, my appetite killed by the overwhelming presence of sex in the air around me, touching my skin, feeding itself into me.

It was an order. I had to obey.

I made a decent attempt at eating my eggs, but the toast stuck in my throat. The coffee didn’t help, so strong it gave me jitters. I spilled a drop and it landed on my nipple, making me gasp and almost make a sound. But I managed not to.

Jasper tutted and dabbed my nipple with some kitchen roll, for much longer than was strictly necessary. Then he kissed it better.

Dropping down between my knees, he had a good long look at my widespread pussy, prodding at it until I winced.

‘That’s a well-fucked pussy,’ he diagnosed. ‘Swollen and red, it is. I think we’ll have to take it a bit easy today. But there are lots of things we can do that don’t involve the old in-out. Aren’t there?’

He raised flashing eyes to me.

I bit my lip and made a gesture intended to convey the phrase, ‘You tell me.’

He smiled. ‘So much to learn.’

If you want to know what Sarah learns from – and teaches – Jasper, here’s some more information. 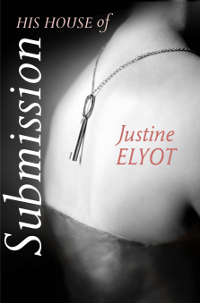 He’s a collector with some kinky interests on the side. She’s here to catalogue his possessions. But will she end up being one of them?

Sarah turns up at Jasper Jay’s country house thinking she has been hired to make an inventory of his large collection of historical artefacts. But when she and her lover, Will, are caught by the boss sneaking a peek at some of his more private pieces, she starts to suspect an ulterior motive. Alone with Jasper Jay in his secluded manor, Sarah finds herself enthralled by the enigmatic collector, especially given the intimate interest she shares with him. Pretty soon, they’re entangled in an intense relationship of domination and submission that excludes the rest of the world. Until it intrudes, in the form of a vengeful Will, bent on exposing everything his erstwhile boss has worked so hard to keep secret.

It’s available right now in all the best e-formats from Mischief Books: http://www.mischiefbooks.com/books/his-house-submission/

Thanks to KD for having me again! And thanks to everyone for reading.