The Military Wife by Lucy Felthouse 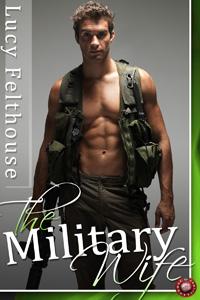 The Military Wife
Tess’ salacious fantasies about her husband, Aidan, see her through the long periods of time when she doesn’t see him—when he’s away on tour with the Army. The rest of the time, she has to deal with day to day life alone. One day, a dull chore is interrupted by the unexpected arrival of her husband, and things quickly hot up in their kitchen, and beyond.

Passing Out Passion
When Christina attends her brother’s passing out parade with her parents, she’s full of pride at his achievement. What she’s not expecting, though, is to bump into old flame Phil Ashdown. They didn’t part on good terms and the atmosphere between them is awkward. But when they’re forced into conversation, it turns out that all those years ago, there was a misunderstanding. One that can very easily be put right.

Double Vision
Becky’s a military wife with a uniform fetish. She loves nothing more than having fun in the bedroom with her squaddie husband, where they share and act out many of their fantasies. However, there’s one fantasy that she’s never divulged, as it breaks their rule about bring other people into their sex life. One day, though, Becky decides to bite the bullet and tell Paul everything. She never expects him to make her fantasy come true. But then, Paul’s a very resourceful man.

Tess grumbled to herself as she heaved the shopping bags out of the boot of her car. It was a pain in the arse having to do this all by herself. Yet she’d been through this more than once, and it was going to be for the foreseeable future. May as well just get on with it and shut up moaning, she thought.

Just as she got to her front door and started fumbling for her key, risking dropping all her bags in the process, a voice said, “Let me help you with that.”

She whirled to face the owner of the voice, unadulterated joy on her face.

“Aidan!” she shrieked. And, without caring who could be watching, she hurled herself into her husband’s arms. Luckily, Aidan had been fully expecting this kind of greeting and had braced himself. Supporting his wife’s bottom with his hands as her legs clasped around his waist, he felt himself stiffening almost immediately. You couldn’t blame him though, it had been months since he’d been home.

As she took his face in her hands, Tess was almost teary with happiness. She leaned in for a kiss that would show her husband exactly how much she’d missed him. Tightening her legs around him, she smiled into his mouth as she felt his erection nudging against her bottom.

What seemed like hours later, the couple finally came up for air. Surveying the damage around them, Tess made a quick decision.

“Grab the other bags while I dump this lot in the kitchen. Then lock the door behind you and get upstairs.”

Grinning, Aidan moved to do as he was told. Tess scrabbled items back into carrier bags and rushed into their home to put them down. Now the kitchen looked like a bomb had hit it. But she didn’t care. Her man was home. Smiling to herself, she turned as Aidan came in with the rest of the bags. She gestured to the floor and he put them down.

“Corporal Scott reporting for duty ma’am,” he said, snapping her a smart salute.

Bastard, she thought, he knows what it does to me when he goes all military on me. We’ll be lucky to make it upstairs at this rate.
Tess drank in every inch of her husband. The climate in Afghanistan had given him a decent tan, but of course he hadn’t been on holiday. He’d been fighting a war, and she was eternally grateful that he’d come back to her in one piece. He was still wearing his combats, with the regulation boots, but no headgear. He looked hot.

“Come here, soldier,” she said, crooking a finger, “and kiss me.”

These Boots are Made for Reading! Kinky Boots is Now Out! → ← Eden Bradley’s Forbidden Fruit — A Tastey Treat
© 2022 K D Grace
Site created and maintained by Writer Marketing Services