I’m very excited to have as my special guest today, the delicious Eden Bradley! And what a treat she has for us today, Forbidden Fruit, yummy and now available in the UK! AND there’s even more yumminess with a giveaway. Welcome, Eden!

FORBIDDEN FRUIT was originally released in the US in 2008, and is now available in the UK in paperback and for your Kindle, and has also just been reissued in the US! I’m so thrilled this book is having the opportunity to reach new readers-it’s long been a favorite of mine.
Having a personal history as a ‘cougar’ myself, I loved writing the older woman/younger man story. But my hero, Jagger, is forbidden fruit in more than one way. And the kink I explore in this story is one part forbidden, and often one part fruit, too. Think honey and chocolate syrup, strawberries and wine…things get messy, but luckily Jagger’s favorite fetish—seeing a woman wet in the shower—cleans things up. Except things tend to get dirty in the shower, too…: )

And Jagger…oh, he’s beautiful…loosely based on Lenny Kravitz, who I’ve had a long-time crush on, Jagger is a chef, and who doesn’t love a man who can cook? Let’s take a look at FORBIDDEN FRUIT.

While Mia Curry’s university students cram into her class on sexuality, Mia has always kept her own private fantasies carefully under wraps – until now…

Jagger James is everything Mia wants and everything that is taboo: he’s young, gorgeous – and a student.

But how can Mia resist?

From the bestselling author of THE DARK GARDEN comes an irresistibly romantic tale of forbidden attraction.
~~~~~~~~~~ 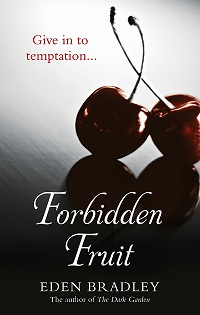 “Do you have any honey, Mia Rose?” He stroked her nipples with his fingertips.

He grinned a little wickedly. “I have more in mind for you. The honey?”

She was shaking all over already, imagining what he might do with it.

She moved on unsteady legs into the kitchen with Jagger trailing behind her. Her mind was as numb as her legs. But she found the squeeze bottle of honey in a cabinet and silently handed it to him.

She swallowed, nodded, then stepped into the hall, showed him the door. He smiled at her, moved past her, and turned the light on.

She laughed a little. But her entire body was steaming with lust. She could hardly wait for him to touch her.

He pulled his shirt over his head. His jeans went next, until he was standing naked in front of her. His cock was as beautiful as she remembered, hard and golden brown, the head swollen. She licked her lips as he slipped her robe from her shoulders. Ah, too good to be naked with him. She was soaking wet already.

He swept her hair from her face, picked up a clip from a basket she kept on the counter and piled her shoulder-length hair on top of her head. He leaned in to brush a kiss across her lips, whispered against them, “Now get in the tub, Mia Rose.”

She did as he asked, with Jagger holding her arm as she stepped over the edge of the old porcelain tub. She felt more naked than she ever had in her life, standing in the middle of the bathtub, her nipples hot and hard, the porcelain cold and smooth beneath her feet.

“Sit down, baby. Yeah, just like that. Stay right there.”

He picked up the bottle of honey and licked his lips, watching her. She was absolutely dying for him to touch her, to put that slick, sticky honey on her skin. To do to her whatever he wanted.

“Do you know, Mia Rose,” he said quietly, “that until I met you I’d lost my passion for food. It was probably buried there, underneath the burnout. But you’ve brought it back for me. In ways I never expected. I wanted to tell you so you’d know this isn’t just for you. It’s for me, too.”
She nodded, unable to speak, her chest, her sex, aching with such keen anticipation she could barely think. The porcelain of the old tub was cool against her bare bottom. But the cold, the hard surface, all seemed part of it somehow.

Jagger leaned closer, raised the bottle, and squeezed a stream of golden honey onto her shoulder. She trembled as it hit her skin, dripped down in an endlessly slow track. And she felt suddenly as though everything were moving in slow motion: Jagger’s sultry smile, her own breath, the honey sliding over her shoulder, her collarbone, the curve of her breast. And the heat moving languidly through her system.
“God, Jagger,” she breathed.

He moved the bottle lower, squeezed it once more, and the honey flowed over her breasts while she watched, paralyzed by the current of desire shivering through her. Her sex swelled, pulsed, between her thighs.

Was this really happening?

When he moved lower, let the honey drip over her belly, her thighs, she could barely handle it. She wanted to spread her legs, to offer him her aching breasts, to beg him to touch her, to lick the honey from her skin. How exquisite to know he would in only a few moments.

And then he reached out a hand and began to smear the golden liquid over her: down her arm, which felt as sensual to her at that moment as though he’d slipped his hand between her thighs. Her mind was emptying out at an alarming rate, and she struggled for a few moments as his fingers traced that stickiness over the undersides of her breasts. Finally, she gave herself over to the inevitable. Let her mind go, gave her body entirely to him.

“Ah, Jagger.” This time it came out on a long sigh.

“Yeah, baby. You love this, don’t you? I can see it. In the way you’re breathing, in the way you hold your hands perfectly still. I’ll taste you soon. Lick every inch of your skin. But not yet.”

A tremor ran through her at his words, at knowing he would do everything he said he would.

Then his hands were all over her, sliding in the honey, massaging it into her breasts. He played around her nipples, rubbing in circles, until the pure need for his touch made them hurt. But it was too good, the way he was touching her, torturing her, the waiting itself.

He spread the honey across her belly with his hands, and lower, into her dark curls. She shivered, moaned.

Using his thumb, he pressed the stickiness into her clitoris. She groaned aloud, writhing, panting suddenly. And then he bent his head and slid his tongue over her throat, down to her breast, taking her nipple into his mouth and sucking.

Her hands went into his hair, into the dark, silky, gold-tipped curls. He sucked harder, paused to lick, to bite a little. Her body surged into his mouth, her hips arcing. Desire moved through her, sharper now, making her swell, ache, all over. She was nothing but heat and need, dizzy with it all. 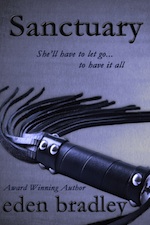 CONTEST! Talk to me here if you’ve ever recognized the sensuality of food. Is it the way chocolate melts on your tongue? A little experimentation in the bedroom with some champagne? Is it nothing more than an appreciation while browsing the gorgeously-colored produce at a farmer’s market? Or does it all seem a bizarre idea to you? And does anyone remember the food scene in the movie 9 ½ Weeks? That may have been a point of inspiration for me. I’ll be back to choose a winner tomorrow (US time) since ‘tomorrow’ for all of you is the middle of the night for me. : ) The prize is an e-copy of my kinky novella SANCTUARY!

Thanks to KD for allowing me to drop by for a visit! And I hope you’ll all visit me on my websites