The Allure of the Abbey by Justine Elyot

I’m very excited to have my dear friend and fabulous writer, Justine Elyot, back on A Hopeful Romantic today to talk about her yummy new book, Secrets and Lords. Welcome, Justine! 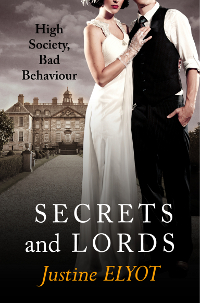 Are you devoted to Downton? Downton Abbey, that is, the smash-hit TV drama of early 20th century aristocratic life?

I’ll admit, I must be pretty close to the ideal viewer for this kind of show. I’ve been addicted to costume dramas since I was a wee nipper dressing up in my mum’s silk petticoats and strings of pearls (and, of course, the frocks have a lot to do with the fandom). Add a dash of angst, above and below stairs, and some light history and I’m sold.

Of course, there is sex in Downton, but it tends to lead to babies, scandal or even death (as in the case of the unfortunate Turkish diplomat, Kemal Pamuk). For me, then, it proved inspiring. A house like Downton Abbey, I should think, would have been an intense sexual pressure cooker – attractions, affairs, courtships, illicit liaisons all going on beneath the perfectly-ordered and luxurious surface.

Thus was conceived my novel, Secrets and Lords. Deverell Hall may bear a passing resemblance to Downton Abbey, and the story is set in 1920, shortly after the end of the First World War, but there the similarities end. The Deverell family is riddled with secrets, and the staff are just as bad. Lord Deverell, the head of the clan, is just about the only member of it who can claim to be straightforward; the rest of them present a face to the world that poorly represents their real selves.

Into this web of deception and intrigue comes Edie, a young London woman whose application for the job of housemaid conceals a secret agenda of her own…

If you enjoy feathers and fans, flirtations and, uh, maybe some other stuff that begins with F, then this book might be for you.

The summer of 1920 will be the hottest at Deverell Hall for years.

Lord Deverell’s new wife has the house in thrall to her theatrical glamour. His womanising son, Sir Charles, has his eye on anything female that moves while his beautiful daughter, Mary, is feeling more than a little restless. And why does his younger son, Sir Thomas, spend so much time in the company of the second footman?

Into this simmering tension comes new parlour maid, Edie, with a secret of her own – a secret that could blow the Deverell family dynamic to smithereens.

The book is available from 30th May from Mischief Books. Pre-order from Amazon:

One Response to “The Allure of the Abbey by Justine Elyot”