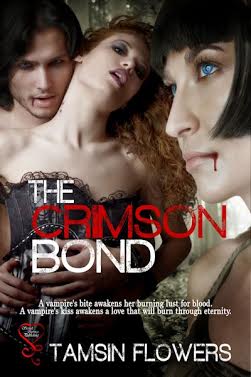 I hope you’ve all survived Christmas without sinking in a sea of brandy butter or being overwhelmed by a… what is the collective noun for a Brussels sprout? And I particularly hope that Santa brought you everything you wanted – world peace, goodwill among all men and a brand new e-reader that you can fill up with smut!

And, coincidentally, talking of which, I’ve brought a short excerpt from my latest release, The Crimson Bond. It’s a sizzling, red-hot vampire tale, an eternal triangle of love, lust and passion between three wayward vampires who can’t get enough of each other… In other words, just the ticket if you’ve had enough of seasonal cheer, turkey and pantomimes!

PS And thanks for having me, KD!

Willow Jackson develops an unhealthy obsession Etienne Corbeau; little does she realise he’s a suave, sophisticated vampire.  After appearing in her dreams, Willow is astounded to find Etienne in her room for real and even more shocked when, in the throes of a passion she can’t resist, he sinks his teeth into her neck and drinks her blood.

But Etienne is greedy and to save Willow’s life, his wife Elouise forces her to drink vampire blood.  From this moment Willow is herself a vampire, forming an unbreakable bond with Elouise which forces her to choose between the beautiful new vampire and her husband of two centuries.

As Willow learns to tame her bloodlust and vampire sex carries her to new heights of physical pleasure, Elouise is snatched away from her.  The battle lines are drawn: now she and Etienne will fight for possession of the woman they both love…

“Don’t be angry with me, Willow,” he said. “Your effect on me is so strong I can’t control myself when you’re around.”

That much was true and it was a feeling Willow had come to understand.

Etienne brushed a hand down her jaw with unexpected tenderness.

His body was close to hers and as he looked down at her face his warm breath tickled her cheeks. She breathed in deeply to catch the scent of him and it didn’t disappoint. Low in her gut, muscles tightened and a shiver ran through her.

“Your bond with Elouise doesn’t stop you…” Her voice was ragged and she didn’t know how to finish what she intended to say.

“A vampire’s bond is mental, rather than physical.” His voice was low, practically a whisper.

She felt his hand on her breast, warm through the thin cotton of her T-shirt. Her knees turned to water and as she slumped against him, he lowered her gently to the ground. She was weak with lust, so overpowering she could hardly breath. But it was different from the bloodlust she felt when she was close to the girls on the ranch. This feeling, burning in her loins and spreading through her body, was a pure, sexual need—the full expression of the mere glimmers she’d experienced when she was still human and she’d lusted after him from afar.

They were both kneeling, facing each other. He pulled at the bottom of her T-shirt and she obligingly lifted her arms as he pulled it up over her head. His every touch felt like a burn on her skin but it was a sensation she couldn’t get enough of. As soon as her arms were free of the shirt, she tore at his, not caring as the buttons flew off and landed in the long grass.

She pressed her body against his, her softness against the firm, rough surface of his chest. She gasped and once again their mouths locked together. He tasted sweet and she felt a compulsion to make herself one with him, her tongue thrusting deep as her body pressed harder still against the length of his. His hands raked through her hair and drew her head back, angling her mouth all the better against his. Then she felt a hand dropping down her back and sliding under the waistband of her jeans. The sensation of his firm hand sliding down her cheek, one finger straying along the crack between her buttocks, elicited a low groan, deep in her throat, and she raked her nails down his back.

With a cry that might have been pain or pleasure or both, Etienne pushed her roughly back onto the grass. His hands scrabbled desperately at the fastening of her jeans and, seconds, later he ripped them down her thighs, scraping them over her knees and off. He buried his face between her legs, taking deep, rasping breaths of her scent, and then she felt his fingers prying their way into her willing sex. Her lips slipped open with a rush of hot juice and Etienne grunted as first his fingers explored her deeply and then his tongue found its way inside her.

Willow writhed beneath his touch but fought the sensations threatening to sweep her away. She longed to feel all of him insider her, so she reached down to his shoulders to pull him up.

He shook off her grasp and lifted his head to look at her.

“You can have both,” he whispered, his fingers still drumming a magical rhythm deep inside her.

“I want everything,” she said, returning his gaze.

You’ll find The Crimson Bond at Secret Cravings, Amazon US, Amazon UK, All Romance and Smashwords. 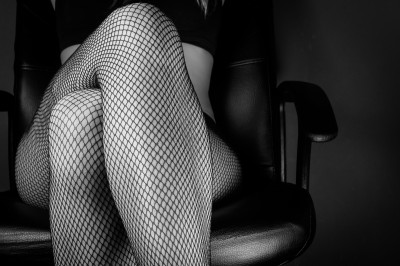 Tamsin Flowers loves to write light-hearted erotica, often with a twist in the tail/tale and a sense of fun.  In the words of one reviewer, ‘Ms Flowers has a way of describing sexual tension that forces itself upon your own body.’ Her stories have appeared in a wide variety of anthologies , for publishers including Cleis Press, Xcite Books and Go Deeper Press. She has now graduated to novellas with the intention of penning her magnum opus in the very near future.  In the meantime, like most erotica writers, she finds herself working on at least ten stories at once: while she figures out whose leg belongs in which story, you can find out more about her at Tamsin’s Superotica or Tamsin Flowers.