I’m Holly Preston, a story-star in Kay Dee Royal’s upcoming paranormal erotic romance short story, Holly Gets Darkly – due to release 11-4-14. When Kay Dee told me about this fun Halloween month of things that go hump in the dark…well, I just had to share a couple of the scenes in my story. I’m a nature photographer, love the forest, and have been after a shot of the elusive cougar in Michigan ever since I was a child and saw one of those big cats in a zoo. The look that cougar sent me…well, I swear it was inside my head talking to me. I never forgot it.

So, back to the darkness and things that go hump…here’s the scary scene:

A snarled warning from something ahead startled me. I stopped and raised the flashlight in the direction of the sound. My hand shook and the light jiggled. A large cat sprang at the wavering beam of light, like a domestic cat playing with a laser beam. Only this creature moved with the speed and stealth of a ninja, powerful muscles rippling along its haunches as it pounced only a few feet in front of me. I held my scream, but dropped the flashlight. It rolled down the hill, leaving me standing in darkness in front of…a cougar.

Holy cougar-bait, now what do I do? I couldn’t stop shaking while my knees turned to jelly and threatened to crumple under me. Crap. Okay, I had sticks…in my hand. I used one to balance and keep me from falling down.

Then the cat ripped past me, tearing in the direction of the flashlight.

It knocked me down, sticks and all. I lay there frozen, listening as the flashlight skidded here and there, until it finally went out.

The cat snarled, whether in anger or play, I really didn’t know and didn’t want to hang around to find out. I crawled, afraid to stand, feeling my way in the opposite direction of where the cat originated.

Attempting to be soundless in the dark over dead leaves was for the birds…they could fly, while I made lots of noise.

Another something snapped as my knee took the hit. Then I sensed the giant cat was near. Folding my knees under me and covering my head with my arms, I lay face down on the ground. It wasn’t for ferocious cats that a person was supposed to act dead around, but at this point I had no choice. I certainly wasn’t going to run. It would only toy with me until it killed me, like it killed my flashlight.

Its warm, moist breath moved the hair that had fallen over my arms as air puffed in and out of its mouth. I knew they smelled with their mouths open and thanked the universe it was too dark to see its sharp fangs. It pawed my arm, back, side, sole of my foot, and then my butt.

I wanted to shout, “Private place!” But as soon as the thought hit my brain, the beast’s claws shredded the back of my jeans. I jerked at the sound of tearing fabric, every part of me screaming to run, and yet the sharp nails never connected with my skin.

I’m never scared in the dark…never scared in the forest, but when that big beast stood over the top of me, it was the tensest moment of my life. So, there’s the scary…but the sexy, well, there’s no end to it due to the pheromone over-dose I got afterward…here’s a teeny dose of one scene:

Naked-guy looked like he was studying me, tilting his head, and then his lips parted…was he panting? He leaned closer and his rugged, forest scent washed over me like hot steam in a Jacuzzi.

The wood crackled in the fireplace and snapped me back to earth. “What the hell are you doing?” I shoved his shoulders, but his body was planted in place.

Of all the things he could have done, I never expected this. He grabbed my hand and wrapped my fingers around his arousal and then crushed his lips to mine, burying his tongue inside my more than ready mouth. There was no way I could move, tethered to his…junk below, and then dueling with his exploring tongue. Good grief, what was a woman to do?

He withdrew his tongue long enough to whisper, “You want me. I can smell it.”

Good gods. Who said stuff like that, and what does that even mean…I hiked all damn day…is he smelling my sweat?

His lips claimed mine and then took me hostage. That was the best way to describe the sensations pulsating through my entire body, spiraling down every appendage, every nerve line, and then all joining forces at my center. My eyes closed and my back arched without my permission, shoving my breasts into his chest and drawing my body out from under the coverlet to grind against my hand still clinging to his cock.

I was losing my mind as well as my body to him.

Then he stepped back, leaving my mouth empty and pulling himself from my curled fingers.

If you’re up for a dark, scary, and ultra-sexy shifter story, consider reading my story – Holly Gets Darkly – it’s the hottest part I’ve ever played 🙂 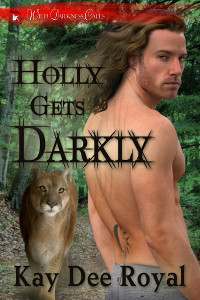 Holly Preston, freelance nature photographer, gets lost in the dark and stranded in the forest on a mission to locate the elusive cougar for the shot of a lifetime.

Keyt Darkly, Forest Ranger, tracks her with more in mind than rescue. 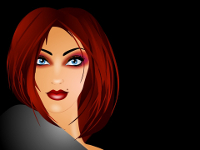 You can find more about her books at Muse It Hot:

SPECIAL NOTE: If you like this post, please consider spreading and sharing through your favorite social network 🙂