One Star Reviews! Every Author’s Nightmare! by M.K. Elliott (@M_K_Elliott)

Okay, so I’m aware that I’ve only tenuously linked this post into Halloween (Nightmare – get it?), but I’ve been wanting to write a post about this for a while now, and so I jumped on this opportunity!

First of all let me say that I appreciate all and every review I get—yes, even the following examples, because even if they’re slightly nuts, they do bump up the number of reviews a book has. Also, I read a little while ago that the statisticians over at Amazon have calculated that a reader is 83% more likely to buy a book if it has some bad reviews, versus a book that had all positive ones. So, hooray for the bad reviews!

So that was a list of my favourite one star reviews! What are yours? And if you’d like to check out my work, and read some of my real life bad reviews, I have a sale running on my sexy sci-fi novella, ‘From Another World’ which is reduced from $2.99 to $0.99! Here’s an excerpt to whet your appetite! 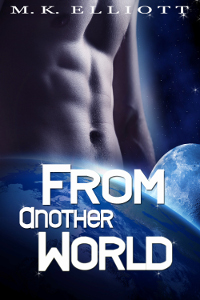 From Another World by M.K. Elliott: Excerpt

His beauty overwhelmed her; had she ever seen a man so perfect? Though every instinct screamed at her to stop acting crazy, she was drawn to him. Nothing about him screamed ‘crazy person’ or ‘drunk’ or ‘drug addict’. Instead, he simply seemed lost and confused and…

Yep, her eyes flicked down to his crotch. He was definitely still aroused.

He lifted a hand toward her, “Jessie.”

No longer thinking, she stepped toward him and he gathered her in his arms. The strong curve of his biceps wrapped around her and he dipped his head, catching her mouth in another kiss. Jessie softened against him and her pussy clenched in anticipation. She found herself on tiptoes, longing to press herself against the hard line of his cock. Tao obliged, lifting her slightly so they fit together, his hardness finding the swollen nub of her clit. Sparks raced through her, making her head spin.

Jessie wrapped her arms around his neck, melting into him. Her hands skirted the naked breadth of his back. His skin felt impossibly smooth, as soft as a child’s, contrasting with the power of the well-defined muscle beneath.

However much he had struggled to clothe himself, ridding Jessie of her camisole didn’t seem to cause him such a problem. In a swift move, he broke the kiss long enough to pull the top over her head, lifting her hair with it, before allowing her hair to drift back around her naked shoulders. He dropped the camisole to the floor, exposing her naked breasts.

Her small, but perky tits throbbed, aching to be touched. This time Tao didn’t seem to know what she wanted.

He turned her around, pressing her over the kitchen island.

“Oh,” she gasped, her breasts pressing into the cool granite counter. Her nipples hardened into buds, sensitized further by the cold surface.

His hands were at her waist, his palms skirting down over hips, across her ass. He cupped each cheek in his hands, as if weighing them up. Jessie moaned, her pussy slick with cream, dampening her panties.

This was madness, but for once Jessie wasn’t thinking. She wanted to feel him everywhere, give over every last part of her; his mouth, his cock, his body pressed hard against her. Deep, hard fucking that would release the pain buried inside. Something she’d not gone near since her husband had died.

Slowly, he rolled her panties down over the round, firm curve of her bottom and past her toned, slender thighs, dropping them to the floor. She stepped out from their pooled circle.

He splayed her legs and parted her buttocks, exposing the pink star of her ass, her wet folds. It was as if he was studying her, taking in every last inch of her.

What the hell am I doing?

He dropped to his knees and his mouth was on her, his hot tongue pressed into the tight pucker of her ass. “Oh God,” she groaned as the stimulation caused her most internal muscles to pulsate.

Jessie’s thighs trembled beneath her.

With firm, strong strokes of his tongue, he penetrated her, pushing past the tight ring of muscle. He slipped his tongue in and out, sending crazy sparks of arousal, tightening deep in her pussy.

Jessie’s hands gripped the edges of the counter, her knuckles white. Pleasure soared through her body and she moaned, her head lowered as he lavished attention on her.

Using both hands, he spread her cheeks further apart increasing the intensity, her sensitivity. She pushed her ass out toward him, wanting more. Every part of her mind screamed that she shouldn’t be doing this, but every inch of her body wanted him. Too much time had passed since she’d been touched like this—if she’d ever been touched like this—and she didn’t want it to stop.

When he lifted his mouth from her ass, she had to stop herself from wilting in disappointment. Then his chest pressed against the line of her back and his cock pushed between the folds of her sopping pussy.

Jessie pushed back and the perfect bell of his dick pushed just an inch inside her, enough to stretch her muscles and feel the ridges of him as her muscles tightened, trying to pull his cock inside her.

He kissed the back of her neck, and oh, so slowly, sank his length balls-deep. They stilled like that for a moment, relishing in the feel of togetherness, in being totally held by another person. Just as slowly, Tao pulled out again, almost slipping from her body, before driving back in. The beautiful length of his cock nudged her cervix, shooting a mixture of pain and pleasure through her body.

He placed his hands back on her ass, using his grip on her buttocks to drive himself, deeper, faster. His thumb grazed her asshole and the sensation caused every muscle to clench, gripping down hard on Tao’s dick. Getting the message, he slicked her with her own moisture and his saliva, and pushed his thumb into the tight channel of her ass.

Following the sudden death of her husband, author Jessie McLeod suffers from agoraphobia and panic attacks. Unable to venture much further than her own property, she’s become trapped in her old farmhouse. Caught in a cycle of sleepless nights and panic attacks, she can’t even do the one thing she used to love – write.

But after an incredible lightning storm one night, Jessie wakes to discover a beautiful and completely naked man in her backyard. He knows nothing about himself except his name, Tao, and that he wants Jessie. Convinced she can help him, and he her, they embark on a journey of self and sexual awakening.

Try though she might, Jessie can’t ignore the strange things that happen when Tao is around – how he seems able to work the computer without touching it, how his fingers sometimes seem to emit a blue light. After a revelation, Jessie must decide if she can face the truth or continue to hide from everyone and everything.

Content warning – contains scenes of an explicit nature. Intended for mature readers over the age of 18 only. This is a novella length book and not a full length novel. *Please note, this novella was previously published as ‘Sextraterrestrial’. The content of the book has not changed, so please don’t purchase it again if you have already read it.*

6 Responses to “One Star Reviews! Every Author’s Nightmare! by M.K. Elliott (@M_K_Elliott)”