Life After Death with Ellen March

First my thanks to lovely KD for the invite to celebrate her wonderful Lakeland Witches, you’re a truly amazing lady. And spooky good wishes for your launch, Hump in the Night is absolutely fantastic.

Grace wasn’t fussy, but she did insist on a pulse in a man says Ellen March

I have always had a keen interest in the supernatural and firmly believe in life after death. The fact that the spirit goes on, it’s continuous and death is the beginning of a long journey completing the circle of life. And one day soon, we’ll all understand the concept of death and the crossing over.

It was due to an experience I had in my bedroom that an idea came to me. I’d taken a photograph and was shocked at what it revealed. How could a clear day show a hazy picture with a startling flash of light illuminating from the wall along with a smattering of orbs? Since moving into our old cottage I’d experienced loud sighs and the weight of a person sitting on the bed. Something was happening. A lot of strange things went on, still do, the touches I feel on my arm. Gentle strokes finger light, I wake up and search, scared at first it’s a spider, but relieved to know that somewhere in my room I have a tentative lover who’s making himself known. And so Ghost was born.

I decided to write A Ghost of an Affair because of my love of romance and obviously the afterlife. What would a person feel like to discover they were no longer mortal, are there a set of rules that should be followed? And then I wondered would a ghost still have sexual urges, and how would he react if he discovered himself drawn to a mortal. Find out in the excerpt below.

A Ghost of an Affair will be available after October 1st, in eBook and 5×8 trade paperback editions on BN.com, the European Amazons and Amazon Japan. Bookstores can order through Ingram, Baker & Taylor or by contacting info@fannypress.com. 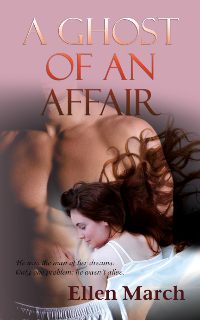 Grace McGillis is over the moon to have won the love, or at least the favour, of Dr. Sage Gerret, the resident heartthrob at the hospital where she is a receptionist. Sage hopes to “improve” her: to inspire her to eat and drink less and educate herself about fine art and music. Everyone sees Sage as a great catch. Why else would Grace put up with his barbs about her appearance and his uninspired lovemaking?

Enter Breece, an adoring alpha male who is out-of-this-world in bed. That is not surprising, for he is, after all, a ghost. Though Sage may not be anyone’s dream date, he is alive. Grace is falling in love with Breece, but is love enough? Even if fate allows her ghost lover to continue his delightful haunting, how will this couple find love everlasting?

Breece strolled in, glad she’d left the door open. He wasn’t sure about going through obstacles yet but assumed he could. Hell, he still couldn’t wrap his head around being dead.

Breece stared at the woman before him, who was busy examining herself in the mirror, stark naked. He felt his cock harden, relieved that the weird stranger hadn’t lied about that. Yet the fact that she aroused him even though she was so different from what he usually liked in his women bothered him.

Another thought soon followed: how did he know that? Finally he went with his instincts. He tried to work out what it was about her, and decided it had to be the naturalness—nothing fake, no silicone tits, no hair extensions, and no plastic surgery. She stood before him as nature intended.

It sent a shiver of excitement over him. It also left him with a question: how he knew so much about fake women?

He watched her weave to the wardrobe. She bent over, and he couldn’t resist crossing to her. His hand caressed her backside. Christ, it was a peach of a bum, one he’d like to bite.

Hell, she couldn’t live with nothing but a weekly sex session!

Rolling onto her stomach, she closed her eyes and passed out. One hand was flung to the side and dangled off the bed; her legs were spread-eagled.

Breece swallowed, hard. He wanted to fuck her. But hell, she was unconscious. He glanced down at his dick, which ridged his joggers and strained hard beneath the material. His decision made, he tugged his clothes off and carefully slid in beside her.

Unsure what to expect, Breece worried that he’d dissolve into her. Also, would he be able to feel her skin? Relief washed over him; it was exactly as he’d remembered. He couldn’t think of anyone he’d actually had sex with, but sensed what he liked and let his libido be driven by instinct.

And she wouldn’t remember a thing. At least for now. In time she would, if she’d really called him, was the cause of him being here. The least she could do was to let him use her body.

And fuck her whenever he wanted.

He dropped a kiss to her shoulder, and her skin shivered beneath his lips. The reaction was slight, but he felt it. He slipped his cock between her legs, rubbing it across her fanny, and her ass gave a small push back. A faint groan fluttered from her open mouth.

Her lips whispered his name. It gusted out on a small breath of air: ‘Breeeeece ….’ That was enough to seal her fate.

She’d called him forth, and she wanted him.

Slowly he pushed home, sunk his cock into her and filled her till he was balls deep. He didn’t care if she was almost comatose. What he wanted was release.

Ellen March lives on top of a mountain in Wales, which is ideal in the summer but not so much in the winter months or when it rains. She has three grown children, one suicidal cat—it really does have nine lives—and three Alaskan Malamutes. One of her hobbies is working them.

You can discover more about Ellen or HD March on the links below.