And they know what they like and what they want and they’re not afraid to ask it of their lover.

I also decided to make the characters older because the story is about taking chances, about going for something even when it seems like it’s doomed before you start. And while young people take chances – often stupid ones, as we see on the news often enough – they are less likely to ponder the implications of their embarking on an adventure. They just go for it without thinking because the future is wide open, as the song says, and who cares if things go belly up, really?

Colm and Amber in One Night in Boston, however, know what they’re doing. They’re well aware that things have not gone amazingly well for them before, and that they’ve not got lots of time to waste on a relationship that’s going to fizzle out after a while. They want to invest in something that has a future rather than something that seems doomed from the start. At the same time, they know life is short, and even they deserve a little bit of romance, even if it is only for one night…

“Feck, feck and fuckin’ feck,” he yelled at nobody in particular.

“That’s all right, Amber. You have your laugh. I’m feckin’ drenched.”

Amber caught her breath. “I can see.”

“So much for finding a restaurant. If we can get a taxi to the hotel we can eat there. I have other clothes, and I can leave these hangin’ on a chair. They’ll dry before mornin’ in that sauna of a room.”

Amber stopped laughing and shook her head, though she still smiled broadly, her eyes glowing with mirth. It was like a little sunshine. “No. We can dry them at my house in half an hour and go for dinner later. It’s still early; there’s still lots to see.”

Amber was sure. She hadn’t been until he fell. Well, she’d been sure she’d kiss him, but as to inviting him home, she’d not thought about it. Much. Well, okay, she’d thought about it, a lot; all the time they were holding hands. But she’d believed it was still a decision waiting to be made.

But once she’d said it, she was sure it was the right thing.

Well, maybe it wasn’t. He was getting on a plane the next day and flying out of her life, just like Billy had—though that had been after a lot more than one day. She didn’t like one-night stands because she felt she was just getting played again. But screw it, she’d made her decision. She didn’t go back on decisions; even bad ones. Her mami could attest to that.

Anyway, it wasn’t often she could let herself take such a chance. Normally she had the kids in the house and that made it impossible to bring a man home. Nor was it often she met a man who wanted to come home with her—or who was worth bringing back home. Since Billy left she’d only been on a few dates. Men didn’t get turned on by the fact she’d two teenage kids.

Colm looked like his ass was cold. The snow stuck to his pants and he pulled at them to keep the wet cloth away from his legs. By the time a cab slowed and stopped for them, the pants were nearly frozen stiff, and sitting in the cab wasn’t very comfortable for him. He made no move to lean against her now, so he wouldn’t get her wet. At least being frozen, water didn’t drip all over the seat, so the driver never knew the pants were damp.

Her flat was a small, two-bedroom walk-up in Mission Hill. She really needed somewhere bigger. But it had a nice deck on the back that looked out over Downtown, and when she got home and kicked back with a beer or a gin and tonic—weather permitting—it was her own little sanctuary. All the bullshit she had to put up with from customers and Billy and the kids and the landlady, and whoever else got in her way that day, just melted away.

Colm seemed to appreciate the view, and didn’t say anything about the small size of the apartment. Nor did he mention the fact it was only fifty degrees in the place. Amber supposed it felt warm to him after the cold bath. He looked around for the washing machine in the kitchen while she turned up the thermostat.

“I got a washer-dryer in the bathroom. I used to go to the laundromat, but man, I’m tired of doin’ that shit my whole life. Landlady doesn’t like it, but she can kiss my big black ass. I ain’t taking my laundry through the snow all winter. Not the way my kids change their clothes.”

“Have you got a towel or anything? Just to dry myself off a bit.”

She laughed. She didn’t think he’d be so shy about disrobing, somehow; him a big farmer and all. “You go get in the shower, warm your ass up. When I hear the water runnin’, I’ll come in and put the clothes in the machine. Then I’ll have coffee ready when you’re done.”

“That’s great, thanks a million.”

Colm got in the shower and Amber threw his clothes in the dryer. Then she put on some coffee. It would be done percolating when she was done with Colm.

In the bedroom she closed the blinds and turned on Samika’s bedside lamp so her own bed was in shadow when she turned off the main light. She didn’t want Colm to see her body in the cold brightness, exactly. She was going to have sex with him, but it didn’t mean she was completely at ease showing him her body. If she was, she’d have gotten in the shower with him already.

When Amber heard the water stop she went back in the bathroom while Colm was still towelling off. He seemed a little startled, but recovered quickly. He looked at her without speaking. She didn’t speak either. What was there to say?

She took him by the hand into her bedroom. He let the towel drop when he got there. She turned around and sat back on the bed, looking up at him. His whole body was extremely pale, his chest and belly covered in thick hair. He had a bit of a paunch, but a wide chest, and his arms and legs were muscular. He looked like he could pick her up and dance across the room—had there been room to stand.

He didn’t look like he wanted to stand much, though. She stole a glance at his dick, already rising to the occasion as he climbed on the bed beside her. 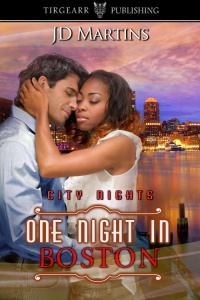 When Colm is stranded overnight in Boston, Amber, a hotel receptionist, agrees to give him a personal tour of the cradle of the American Revolution. Colm has loved and lost, and now takes pleasure where he finds it. Amber hasn’t quite found her feet again after a recent divorce, nor is she very happy with what she sees in the mirror.

As they drive through the historic streets and stroll along the Freedom Trail, taking in the beautiful architecture of Beacon Hill and Back Bay, their mutual attraction grows and both take a chance on happiness. But can they trust one another? Can Colm convince Amber he’s not just playing her, or is his one night in Boston just a fling?

10% of the author’s royalties will be donated to WWF, the World Wildlife Fund.

Buy Links for One Night in Boston:

Make sure to follow the whole tour—the more posts you visit throughout, the more chances you’ll get to enter the giveaway. The tour dates are here: http://www.writermarketing.co.uk/prpromotion/blog-tours/currently-on-tour/j-d-martins/

The Psychology of Dreams 101 → ← Out Now! – The Collector by Kay Jaybee (@kay_jaybee) #erotica #ku #kindleunlimited