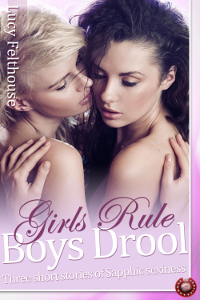 Boyish dyke Toni is working at the local golf club, serving champagne to arrogant, privileged folk when she spots Clarissa. She’s one of the posh people, but she looks like she’d rather be somewhere else—anywhere else. Toni’s immediately smitten and wants to put a smile on the older woman’s beautiful face, so she decides to show Clarissa just why girls rule and boys drool.

Joely’s holiday has consisted mainly of chilling out by the hotel pool, having the occasional swim and reading lots. That is, until a hot brunette arrives and suddenly, Joely has trouble concentrating on anything else. Her gaydar non-existent, Joely decides on an unusual course of action to find out whether the newcomer bats for the same side as her.

Fear as an Aphrodisiac

Finally, Nikki and Sonya found the turning off Edinburgh’s Royal Mile that they needed. They’d expected a road, but Mary King’s Close was nothing more than a narrow passageway that looked like it led to the next street along. Glancing at one another, it seemed both girls suspected they were in the wrong place—despite the name of the alleyway—but as they headed along the close, they came across more signage and discovered they were wrong. The signs proclaimed that they were indeed at The Real Mary King’s Close, and this time they exchanged a relieved look and moved inside the tourist attraction.

After paying their money, they were put into a group that was already waiting, and after a few minutes was called to attention by a member of staff. The young man, dressed in incredibly old-fashioned attire welcomed them to the attraction and gave some brief information about what they should expect from the tour, as well as some health and safety spiel.

Then they were ushered deeper into the building and down some stairs. Another peculiarly-dressed actor met them and gave his talk. The group soon learned that Mary King’s Close had been a town of sorts, a collection of streets and houses, named after the most prominent local—Mary King. It had functioned well, this part of Edinburgh—in its day. But it had also befallen hard times and tragedy, including the Black Death. It was rumoured that people affected had been bricked into their houses to prevent the disease spreading further. It had never been confirmed nor denied, but the very idea sent a shiver down Nikki’s spine.

As they advanced into the underground town—now covered over by modern Edinburgh—they learned more about the inhabitants, their lives and, in some cases, their deaths. By the time they were shown the shrine of a young girl, covered with offerings both old and new, Nikki was clinging onto Sonya’s arm so hard that the other girl gave her a nudge.

“Oi, you’re hurting me! What’s the matter with you?”

“Sorry,” Nikki replied. “I’m getting a little creeped out, that’s all.”

“A little? The way you’re squeezing my arm, I’m beginning to think you’ve seen a ghost or something.”

A meaningful glance from the tour guide shut them up. Nikki dropped her hand to Sonya’s and held it. The group continued through the subterranean labyrinth, listening to more tales of the past, the things that had happened within the very place they stood, over four hundred years ago.

Some periods of total darkness with recounts of history later, and Nikki was a nervous wreck. She’d always had an overactive imagination, and although she’d never seen a ghost—despite Sonya’s words—she believed in them and was really succumbing to the eeriness of the ancient place. She had gotten to the stage where she fully expected to see the spectre of little Annie—having left the site of her shrine—peering around a corner, beckoning to her. Or the chilly finger of a plague victim trailing down the back of her neck. She grew so paralyzed with fear that she fell silent and didn’t take in a word of the rest of the excursion—simply holding onto Sonya’s hand as they walked through the rooms and tunnels.

When they eventually emerged into the outside world once more, Nikki heaved a sigh of relief. “Sonya, darling, take me for a drink, now. A stiff one. A double vodka and coke sounds perfect right now. Maybe even a triple.”

“Were you really that scared?” The other woman looked disbelieving.

“What do you mean, were? I still bloody am. I’m sure I’d have found it interesting if I wasn’t so busy being terrified. I’m surprised I didn’t wet myself.”

“Aww, babe.” Sonya pulled the other girl into her arms. “I didn’t realise you hated it that much. We could have left if I’d known.”

“No,” Nikki shook her head. “It’s okay, I didn’t want to ruin it for you. I just got to the stage where I blocked it all out. But I’d still really like a drink, if you don’t mind.”

Sonya gently pushed Nikki against the wall of the alleyway and hugged her once more. “Okay, we’ll go for a drink soon. Let me hold you for a few minutes, first.”

The other girl said nothing, just relaxed into her lover’s embrace and slowly, very slowly, felt the fear ebbing away. With not a small amount of horror, she realised that she was turned on. Her knickers were damp and sticking to her, and the heat emanating from between her legs was unmistakable. What the actual fuck? She kept quiet, instead nuzzling into Sonya’s neck and pressing a kiss to the delicate skin there.

“Ooh,” Sonya said, shuddering, “that was lovely. What was that for?”

“For being nice.” Nikki’s voice was muffled, and she kissed her girlfriend again.

“Hey,” Sonya said, grabbing Nikki’s hands and squeezing them, “you’d better stop that, otherwise I’m going to get turned on. And that’s the last thing you want right now. I’m trying to be understanding here, sweetheart.”

Nikki came to the conclusion that she didn’t mind if Sonya got turned on, not at all. In fact, some sexy fun might just take her mind off the creepy underground place they’d just visited. It was damn weird that being scared had turned her on, but the more she thought about it, the more she figured it kinda made sense. Nothing, in her opinion, was scarier than death, and the French word for orgasm translated to ‘the little death’—so it was widely accepted that sex and death were connected. Sex was about life, death was about, well, death. So, in an attempt to stop thinking about things that confused the hell out of her, she was going to embrace life, wholeheartedly. And if that meant experiencing the little death, then so be it.

“I don’t mind,” she whispered into Sonya’s ear.

“What do you mean, sweetie?” Sonya replied, grabbing her shoulders and moving her back so she could look at her face. “You don’t mind what?”

“I don’t mind you getting turned on.”