Finding My Self-Publishing Self by Justine Elyot

It’s always a pleasure to have Justine Elyot over on mine. Not only is she a good friend and colleague, but she’s one of my fave erotica writers, and I’m really excited today because she’s going to talk a bit about her first experience with self-publishing. Welcome back, Justine!

When I were but a lass, there was definitely a stigma attached to self-publishing. Consumer rights shows on TV such as That’s Life often featured vanity presses – shoddy outfits run by unscrupulous gits who would prey on the dreams of the unpublished in order to take their money. Self-publishing proper would only be undertaken by those with the funds to pay for printing and PR. Hardly anyone, then.

Then, digital publishing happened, and everything changed. Self-publishing has gone from a vaguely embarrassing ego trip to a genuinely viable alternative to the traditional method. It seemed like a good time to give it a whirl.

I had on my hands a story that was a bit too short for some publishers and too long for others. It was also somewhat gentler and more vanilla than my usual style and I wasn’t at all sure where it would fit. So I decided to do it myself.

I’ll confess here that it isn’t the first time. I tried it three years ago, through Smashwords and, while it wasn’t terribly difficult, the manual was long and the sales were negligible. But Amazon’s new Kindle Direct Publishing seemed to be changing the game a bit so, after a bit of a confab with a knowledgeable friend, I decided to go for it.

Boy, was it easy. I was prepared to spend days up to my eyes in formatting hell, but no. I opened my account, clicked a few tickboxes, uploaded my file and…go. Well, almost go.

First I had to wrestle with cover art. I’m not good at wrestling, and I’m even worse at cover art. My first attempt has, happily, been excised from history after the brilliant Emmy Ellis came to my rescue and donated this little beauty. 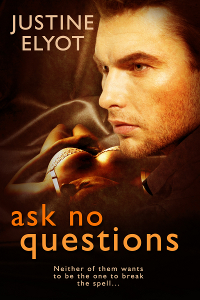 It’s been three weeks now, and I can’t say sales have been stellar, but I have the KDP Select weapon of five days free promotion lined up in my arsenal and I’ll be interested to see if it makes a difference.

By signing up to the Select programme, I commit to making the story exclusive to Amazon for 90 days. After that, I can place it on whichever other sites I like. Is it worth it? I don’t know. I’m using this story, in effect, as a walkthrough for a forthcoming novel publication, to teach myself the ropes. It’s an interesting and fun learning experience, and if you fancy going for it, I’d encourage you.

But…what about the book itself? I (don’t) hear you ask!

Ask No Questions is a 32,000 word novella about a sheep farmer and the mysterious pair of legs he finds in his barn during a rainstorm. (The pair of legs is attached to a person, you may be relieved to hear.)

Excerpt? Why, it would be a pleasure!

He gritted his teeth, awaiting Kim’s response, feeling guilty for bringing her this far without thinking of the consequences, not to mention furious with himself. Actually, it was the lump in his trousers that was most furious of all, but he wasn’t about to let it have its way and override his common sense, tempted as he was.

She propped herself on her elbows, blinking at him.

“Do I need protection from you?”

“Look, I can go to the chemist first thing in the morning but ―”

“Well, that’s all right then. You can do that. And meanwhile…don’t tell me you’ve never heard of all the other things you can do, Mr Demon Lover?”

“Of course I know about the other things.” He began to take off his shirt, his heartbeat regulating, his hopes rising once more. It was OK. It would be OK. “Believe me, I know all about them.”

“That’s good,” said Kim, faux-innocent. “Because I have no idea at all. Please show me what they are.”

He threw his shirt aside and pounced back down on her, bare-chested, hovering over her luscious naked body. She laced her fingers around the back of his neck, pulling him further down so that when he spoke, their lips touched.

“You know fine well, madam,” he said. “You can’t pull the wool over my eyes.”

“Well, you’d know all about wool.”

He nipped at her lip, a warning, then smiled devilishly and shimmied back down until he knelt between her thighs once more.

“You’re not the only one who can tease, remember,” he said, reminding her with a thumbnail flick to one of her nipples.

He answered by bending and taking a nipple in his mouth, sucking luxuriously and unhurriedly while she kicked her heels and beat her fists on the rug. This was how he wanted her – frustrated beyond endurance, desperate for everything he could give.

She tried so many different tactics to move him towards her pussy – stealth, force, sweet requests, demands – but he was only going there when he was good and ready, and her nipples were as swollen as they could be.

Finally he released his engorged little captives and knelt up again. He held her eyes as his hand moved down her stomach, prodding at her navel, then lower. He placed his palm flat on her mons.

“Want it?” he asked softly.

He dipped his forefinger inside her lips, gathering juice from the pink swirls surrounding her clit. He could see it clearly – it was far out of hiding, as if declaring itself open to him. Come and get me. You bet I will, he said to himself.

But first he removed his finger and sucked the juice from it, watching as Kim’s face contorted with further agonies of arousal. The first taste on his tongue, the sweetest in years.

“Want some?” he whispered, harvesting more and putting his finger to Kim’s lips this time.

If you want to read more, Ask No Questions is available from…but I’m sure you’ve already worked it out…AMAZON!

Get Laid by Annabeth Leong → ← Grand Openings, Reading Slams and Why I Love my Job!

5 Responses to “Finding My Self-Publishing Self by Justine Elyot”