Get Laid by Annabeth Leong 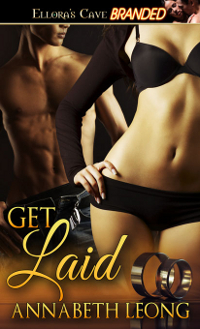 Renovators have invaded the home of Jason and Eliza Wu. The two haven’t seen a clean surface in months and, even worse, haven’t had a moment to themselves. With stress in their work lives added to stress at home, the couple desperately needs to have some fun. Jason and Eliza embark on a bold plan to make love and get out of the house—at the same time. Through a series of hot adventures and wild mishaps in the car, at Eliza’s mother’s house, on the top floor of the library and everywhere in between, Jason and Eliza find that not only can they survive renovations, they might even be sorry when they’re over.

By scooting the heaviest things out of the way with the side of her thigh, Eliza could open the refrigerator door just enough to slide her arm in and identify a wine cooler by shape. She snaked it out of the refrigerator, but her hand slipped on the sweating glass bottle just before she got it clear. It crashed to the floor and shattered, soaking the lower half of her stockings and the big bags of flour and rice from the pantry with pink, sugary alcohol. Shards of glass surrounded her and Eliza swallowed, thinking of her bare feet.

Her husband responded before she could. “Don’t move,” Jason said. He was barefoot himself, but that didn’t stop him from getting in close enough to sweep her up into his arms. The man might sit behind a desk all day at work, but he put in his time at the gym. His taut muscles flexed around Eliza as he lifted her out of the mess and glass and tucked her against his chest.

Jason carried Eliza to the other side of the room and set her on the table. “Are you all right? Did you cut yourself?” He lifted one sticky, stocking-covered foot in his hand and inspected it for injuries.

“I didn’t get hurt.” Eliza caught his other hand and brought it to her lips. “Thanks, Jason. Really.”

He kissed the side of her face in response, and she wished he’d gone for her mouth instead. She reached to pull him in for a better kiss, but before she could he crossed back to the refrigerator and folded his arms across his chest. Eliza and Jason both sighed.

“I think we’re going to have to throw all this food away because of the glass,” Jason said.

“I’m sorry.” She got off the table and tapped one foot, trying to remember where they’d moved the broom.

“You stay there. I’ll take care of this.”

Eliza smiled, a little of the tension easing. “I want to do something really fun at home for our anniversary. It’s five years, and maybe our last chance before we have to grow up for real and behave. We should jump on the beds and have sex on the kitchen table.”

“If you haven’t opened the document I shared with you, then you didn’t see the note I made about the latest delay.”

“When they checked out the master bathroom, they found a rotten beam. It needs to be fixed, but Bob said it means the job won’t be done until mid-August.”

“But that’s only two weeks before our anniversary! That’s more than a month behind schedule.”

Jason shrugged. He wrapped his hand in a dishtowel and began throwing items from the pantry into a big black trash bag. “I don’t like it any more than you. They have to finish the job eventually, one way or another.”

“He always finds something else! Did you ask him if he’s sure about the schedule this time?”

Jason stood abruptly and stepped away from the mess in front of the refrigerator. “I don’t want you criticizing me for how I talked to Bob. Why did we think renovations were a good idea?”

“Oh, Jason.” Eliza rushed to his side and tried to put her arms around him, but he shook her off.

Her husband rubbed one hand over his face. “I don’t want us to fight again. I want to have a nice time with you tonight. Do you know why I was upset when you got home? I left the office a little early and I was going to straighten up around here and make you dinner. If we could open the damn refrigerator, you’d see I picked up avocados and a bunch of other stuff you like. I got home and found the kitchen like this, and I knew I couldn’t get it sorted out in time to surprise you.”

Jason grunted and tossed a few more things into the trash bag. Eliza hovered nearby, wishing she could wave their problems away and start the fun they both wanted. She found herself staring at his firm ass, trying to remember the last time she’d really grabbed it. They’d always had a good relationship, a hot relationship. She’d been shocked to see how the stress of renovations had reduced them to sniping at each other.

He stopped moving. “What do you mean?”

“I miss your body. When was the last time we really had some time to ourselves?”

“You mean other than time we spend complaining to each other about the renovations from hell?”

“I love that you were going to make me dinner. Really, I do. It’s just there’s something I might need more than dinner. I think we both need it.”

A slow grin spread over Jason’s face. “I may have had an ulterior motive when I decided to make you dinner.”

“I hope you did.” Eliza reached out to him with one hand. “Can’t we clean it up in the morning? We have to stop letting these renovations ruin our lives.”

Jason took her in his arms before she finished her sentence.

Zak Jane Keir’s Black Heart: No Virgins, No Billionaires, Lots of Heat → ← Finding My Self-Publishing Self by Justine Elyot

2 Responses to “Get Laid by Annabeth Leong”