Thank you so much for hosting me!

This is also the book that’s pushed me the farthest as a writer, though, so perhaps it’s no surprise that it led me to a deeper understanding of what happens when people fall in love.

I’ve written romances before, and I’ve had romances in real life, so I’m familiar with the stages of attraction and the realization that a connection is turning from attraction into something more. Untouched, however, made me step back and think about what’s going on in those cases.

I think falling in love feels like a private world is being formed. There’s a sense of wonder, accompanied by desperate hope that the feeling is mutual. There’s a sensation that the other person gets it in a way that’s special and different from most of the world.

To me, falling out of love is the collapse of this private world. It’s the realization that there was something false about it all along, or the admission that foundational pieces of it have been lost.

This private world is so heady and so wonderful to be in, that I think we’re all aware of how dangerous and seductive it can be. I want to see it so badly that I can convince myself it’s there even when it’s very much not there.

So this becomes the challenge of falling in love and then maintaining it—truly recognizing that private world when it appears, and then working to preserve it.

In many ways, that’s what Untouched is about. Celia, the heroine, is cut off from the world by her inability to allow someone to touch her. She doesn’t believe she can have that private world with anyone—until she meets Eli, and that sense of mutual understanding forms. From there, Celia’s plunged into a world of questions. Is this truly what it appears to be? In moments when it feels as if it will collapse, can it be saved? Is there something to rescue, or do those dark moments mean it was never there at all?

I enjoy the romance formula very much when I’m in the mood for it, but there’s a sense of safety that dulls the impact of those questions. In a romance, everyone knows that the characters are fated to be together, that the private world they’re glimpsing is true and right. It’s wonderful to go through that experience with characters, but in real life I’ve never had the luxury of knowledge of fate. For me, love has always felt more like the way I’ve written it in my erotica novel, Untouched. It’s large and scary and uncertain, and at the same time so heady and tempting. 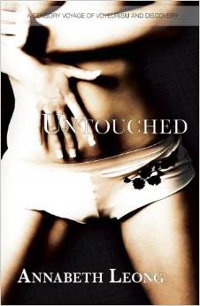 The street where Eli had parked was empty except for a sleepy craft store and a few half-vacant apartment buildings. A grocery store circular drifted down the road, propelled by a lazy breeze. Everything contrasted with Celia’s sweaty urgency.

Eli drove an older luxury car, well-maintained, detailed, and cleaned, roomy on the inside. Celia grinned at him. “That looks perfect.”

“You’re sure? You would do this on the street? What if someone sees through the car window?”

“I don’t care,” Celia said firmly. Her pussy was already on the Internet. She could bare herself to Eli now without fear. “How about you?” she asked, trying to gauge his expression.

“Right now, I’d do just about anything.”

Again, tenderness compelled her to look out for him. “Will you be sorry tomorrow?”

“I can’t imagine how I could be sorry. This is the hottest thing that’s ever happened to me.”

Eli fumbled with his keys, shaking too much to fit them to the car’s lock. His hand slipped, and he dragged the point of the key a short distance over the car’s paint, marring it and creating a brief metallic screech. The keys dropped to the pavement.

Celia felt brave and capable. “Take two steps to your left,” she said, and he obeyed her without question. When he’d moved out of the way, she knelt and picked up his keys. The metal was still warm from his hand. She cupped the keys in her palm, staring down at them in awe, feeling closer to him than she’d managed with another person in years.

Afraid that he wouldn’t understand, she slowly lifted her eyes to his face. Her fears proved unfounded. He wore a reverent expression that matched her feelings exactly. “That’s a big deal for you, isn’t it?” Eli’s voice was hushed.

“We have something, don’t we?”

Celia Lambent lives in constant conflict. Her sexual appetite is voracious, and yet she cannot bear to be touched. Untouched is a raunchy journey of voyeurism and discovery as Celia seeks the cause and cure for her condition.

Untouched is also distributed in the U.S. by Consortium, and will be available at many fine bookstores.

Annabeth Leong has written erotica of many flavors. She loves shoes, stockings, cooking and excellent bass lines. Her work has appeared in more than 40 anthologies and counting, including Made for Hire from Sweetmeats Press. Visit her website, annabetherotica.com, or find her on Twitter @AnnabethLeong

Preorder Untouched now and forward your confirmation e-mail to annabeth dot leong at gmail dot com. As a thank you, Annabeth will send you a complimentary e-book copy of your choice of one of her other single-author titles (You can see them listed at annabetherotica.com). Please include which e-book and format you’d like in your e-mail.

Lisabet Sarai Shares The Ingredients of Bliss → ← An Angel’s Soul (Sins of Wolves: The Safe Mountain Series) by Destiny Blaine and Marc Alice