I’m very happy to welcome back one of my very favourite guest bloggers and one awesome story-teller, the lovely Lisabet Sarai! I honoured to launch the blog tour for her exciting new novel, The Ingredients of Bliss. There’s fun, there’s a sizzling excerpt, there’s a totally amazing giveaway and of course, links so you can get your own must-have copy of The Ingredients of Blisse! 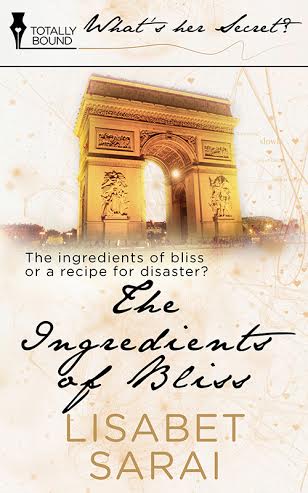 The Ingredients of Bliss: From Short Story to Novel

The characters in The Ingredients of Bliss made their first appearance in my short story Her Secret Ingredient. At the time, I had no thoughts of following that story with a novel-length sequel. Totally Bound had contacted me and asked if I’d like to contribute to their new What’s Her Secret imprint. The concept sounded intriguing – a series where each heroine keeps something hidden from the other characters, until she’s forced to reveal it.

As I pondered the possibilities, the story started to take shape in my mind. Mei Lee “Emily” Wong is a French-trained chef from Hong Kong who is invited to America to appear on a cooking show with the famous Gallic foodie, Etienne Duvalier. A culinary traditionalist, Etienne scorns Emily’s more creative approach to cooking. To win him to her side, she spikes a test dish with an ancient Chinese aphrodisiac. However, the nerdy producer Harry Sanborne samples the adulterated profiteroles before she has a chance to offer them to Etienne, and reacts with delightful passion. Though she’s drawn to Harry, the ambitious Chinese gal resolves to try again, with disastrous results. When Etienne consumes the aphrodisiac, she finds him on his knees, begging to be sexually dominated – on national television! Harry saves the day and sweeps Emily the rest of the way off her feet. In the final chapter of the book (exclusive to the VIP edition available directly from Totally Bound), Harry reveals his interest in BDSM and Emily discovers, much to her surprise, that she has a strong submissive streak – at least when Harry is topping her.

I was pretty happy with Her Secret Ingredient. It’s light and funny and sexy. However, I thought I was done with Emily, Harry and Etienne. Then the publisher asked if I could write a follow-up novel.

I was floored at first. I mean, I didn’t know these characters all that well. How deeply can you explore someone in 15K? Still, I like to make people happy, especially my publishers, so I put on my thinking cap. My first breakthrough was the notion of setting the novel in France. In 2013 I spent two weeks touring that fabulous country, so I thought maybe Emily, Harry and Etienne might follow in my footsteps.

With two males and one female, a ménage seemed inevitable. However, Harry is a Dom and Etienne has masochistic tendencies. How was I going to work that? And whom does Emily really want? The suave, seductive Frenchman, or the virile, sexually-creative American? Or both? And (aside from love scenes and the travel log), what was I going to do with the requisite 60,000 words?

The answers came to me gradually. I came to know my characters more intimately. I realized that Emily was as confused and uncertain about the situation with her two lovers as I was. So I let her work it out, giving the plot a radical twist that brought her true feelings into stronger relief.

And now? I think could write another novel about Emily, Harry and Etienne. Will I? That all depends on the reception I get to The Ingredients of Bliss!

Blurb for The Ingredients of Bliss:

One sexy French chef. One kinky American TV producer. One ambitious Chinese gal who thinks she wants them both. The ingredients of bliss? Or a recipe for disaster?

Accomplished cook Mei Lee “Emily” Wong knows exactly what she wants—her own show on the Tastes of France food channel. But life is full of complications. First, her deceptively nerdy producer, Harry Sanborne, initiates Emily into the delights of submission. Then her boss, legendary chef Etienne Duvalier, begs her to dominate him. Emily just can’t resist—especially when Harry orders her to explore her inner mistress. Suave and sexy Etienne will do whatever she asks—in the bedroom if not in the kitchen. And Harry, her lovingly diabolical Dom, adores pushing Emily’s limits.

When the network sends the trio to France to shoot a series of cooking shows on location, Emily knows her career is on the upswing. Her plans fall apart in Marseille as a Hong Kong drug syndicate kidnaps both Etienne and Harry. The Iron Hammer Triad mistakes Etienne for notorious gangster Jean Le Requin, who has stolen their drug shipment, worth millions. Emily realizes she must find the real Le Requin, retrieve the purloined dope, and bargain it for Harry’s and Etienne’s lives. The secret she’s been keeping from Harry might prove useful. Still, what chance does one woman whose knife skills are limited to chopping vegetables, have against the ruthless cruelty of two criminal organizations?

X-Rated Excerpt: The Ingredients of Bliss by Lisabet Sarai

Harry looked up from one of his favorite positions—crouched between my spread legs—and searched my face. The usual mischief gleamed in his cinnamon-brown eyes—a bit unfocused without his glasses—but his lush mouth showed no trace of a grin.

“Shouldn’t that be who, rather than what?” My laugh sounded forced, even to my own ears. It turned to a squeal as he swept his tongue along the length of my cleft, ending with a neat flick to my clit.

Sometimes his intuition scared me. “It’s nothing, really.” How did this guy know me so well, after a mere three months?

“Ow!” He’d pinched the sensitive flesh of my inner thigh.

“Do I have to beat a confession out of you—again?”

His casual reference was enough to send my mind spinning back to that wild night when he’d first revealed his kinky streak. Tied to the iron railing at the look-out atop Twin Peaks, my panties around my ankles and my dress bunched up around my waist, I’d received my first searing lesson in submission.

Unruly hair fell into his eyes, making him look younger, and rougher, too—a bit like Brando in A Streetcar Named Desire. I wanted to brush those black locks off his brow, to touch him, to soothe and reassure him—to feel his lovely muscles shift under the tanned skin of his broad shoulders. Bound hand and foot to the bed frame, all I could do was writhe and yelp as he burrowed his face in my pussy, while raking my thighs with his fingernails.

Pain and pleasure. Pleasure and pain. Wasn’t there a time when I could tell the difference?

Whatever he was doing, I liked it. I couldn’t pretend that I didn’t.

Second prize: $20 gift certificate to Whole Foods Market (http://www.wholefoodsmarket.com)
Third prize: Three-pack of ebooks from my back list, including a copy of Her Secret Ingredient, the prequel to The Ingredients of Bliss.

I’ll also be giving a PDF copy of my own original cookbook, Recipes from an International Kitchen, to everyone who leaves a comment. AND I have a bonus $10 Totally Bound gift certificate for the tour host who gets the most reader comments.

To enter, simply leave a comment that includes your email address. You can enter once for each spot in the tour. For the full tour schedule, go to: 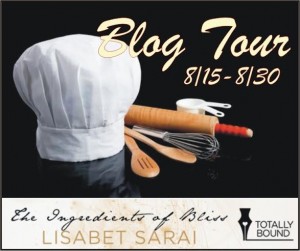 The Ingredients of Bliss By Lisabet Sarai

Get your copy today!

The special VIP edition of The Ingredients of Bliss is now available from Totally Bound. This version contains a sizzling bonus chapter not available from other retailers. Totally Bound has the most advanced book selling site of any independent publisher on the web, with new One-Click ordering and direct delivery to all e-reader platforms.

I started both writing and cooking at an early age, and I’ve continued to indulge both passions as I’ve matured. Usually I’m an improvisational cook; I’m not all that fond of following recipes, and when I do, I almost always introduce my own variations. My philosophy tends to be the more spice, the better.

I have more degrees than anyone would ever need, from prestigious educational institutions who would no doubt be deeply embarrassed by my chosen genre. Widely traveled but still with a long bucket list of places to go, I currently live in Southeast Asia with my indulgent husband and two exceptional felines, where I pursue an alternative career that is completely unrelated to my creative writing.

Roman Heat: A Hot Summer Except from To Rome with Lust → ← Falling by Annabeth Leong (@AnnabethLeong)

13 Responses to “Lisabet Sarai Shares The Ingredients of Bliss”