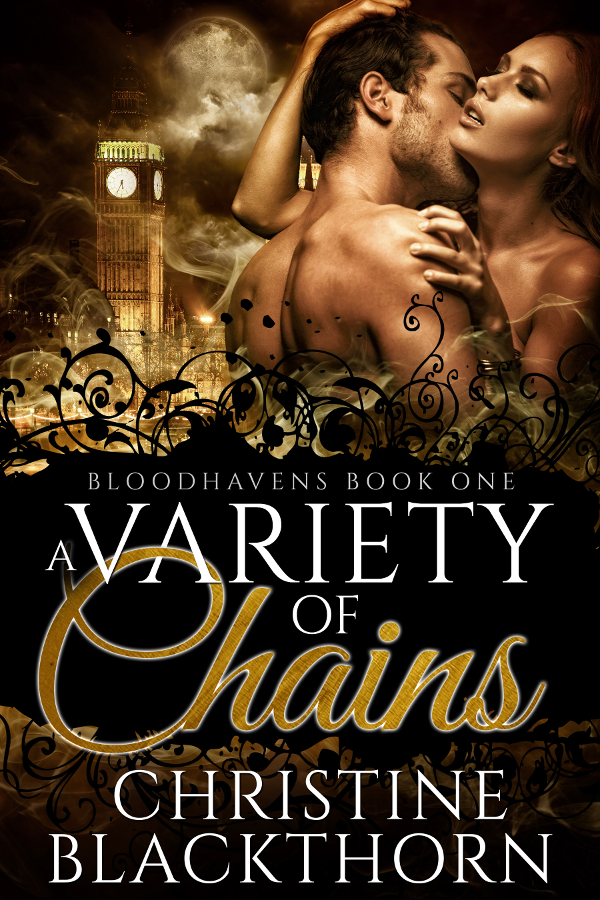 Kathryn McCulsky is an ErGer – a rare and highly prized individual in the supernatural world.

She has spent her life running and hiding, but circumstances have changed and the only way to protect her family is to hand herself over to the Vampire Lord of London to face slavery or death.

Lucian Neben runs his London court with a stern but fair hand, but political pressures are building from both the human and fey worlds, and taking possession of an ErGer would cement his position of power.

Kathryn is vulnerable and broken almost beyond repair, but she holds in her hands the one treasure Lucian desperately wants – the possibility of home and family.

Can he teach her to open herself up; to choose to life, and him, before reality forces him to take her freedom?

Note: A Variety of Chains will be available through all main online bookstores in print and digital on the 20th of August.

It was inevitable where this evening was going to lead. For an ErGer to bond, the mind needed to be broken open as only sex could – and her own body would force it soon enough.

His eyes remained expressionless, as was his voice when he spoke again. “It was not a request.”

Absolute obedience for the safety of the girls.

She reached for the glass and took a small sip. As she tried to put it back down, his hands tightened on her waist and brought her attention back to him mid-movement.

She offered him the glass, but he shook his head. “My hands are full.”

To illustrate this fact he began to trace little half circles over her belly with his thumbs. She tried to offer the glass to his lips but he shook his head again.

“Not like that.” There was a hint of amusement in his eyes and a twitch to his lips. Instead, she tried to offer her wrist, but that simply made him raise an eyebrow.

“How then?” She felt the desperation in her own voice and tried to suppress it while making the cold return.

“Take a sip and hold it in your mouth.”

She was starting to have an idea where this was leading. She tried to lean forward to feed him the wine but his hands kept her from him.

“Set down the glass first, then let me drink from your mouth.”

Carefully she put down the glass before leaning forward. In her haste and nervousness she parted her lips before touching his and spilled most of the wine down her chin and his neck. She froze in terror, aware of the strength in the hands around her waist and the sharp teeth entirely too close to her. His lips parted and his tongue snaked out to lazily lap at the liquid dripping down her lips and chin. Only when he had cleaned her thoroughly did he allow her to move back enough to meet his gaze. Her eyes fell to his mouth and the spilled wine that painted his neck and shirt red. Small droplets were still caught in the evening shadow of the beard along his cheeks.

The first flick of her tongue was tentative at best, barely a touch, but when he moved his head to allow her more access she became bolder. The taste of his skin, mixed with that of the red wine, filled her mouth – unidentifiable, subtle and strange. As her tongue reached his neck, his arousal grew impossibly large beneath her, pressing against the folds of her sex through only two layers of clothes. She shied back – feeling stupid immediately. It was inevitable where this evening was going to lead. For an ErGer to bond, the mind needed to be broken open as only sex could – and her own body would force it soon enough. In her experience, he had shown more patience than any other. Every Lord who had ever acquired her, either because her brother had sold her to them or because they had tracked her down, had taken her blood and body within minutes of their acquaintance. What was the point of delay?

In “real” life, I am an academic with degrees in Political Science, Economics, Philosophy and Law and an insatiable desire to confound, baffle and disconcert my students. Someone once suggested to me the reason for my stories lay in the desire to offset the tedium and rationality of academic life. He wasn’t an academic or he would have known better. It is best to use research against tedium, students to offset the rationality and an unlimited supply of stressballs for the faculty meetings. The stories? Well, they are just for me – like a mental manicure.

I also write a blog on Feminism and Erotica – come talk to me: