Charlotte Stein Tells Us About Her Novella, Restraint

It’s my pleasure to welcome back to A Hopeful Romantic, one of my very favourite authors, Charlotte Stein, who will be telling us about Restraint, her yummy novella from the Xcite’s Secret Library collection, Hungarian Rhapsody Anthology. Welcome back, Charlotte! 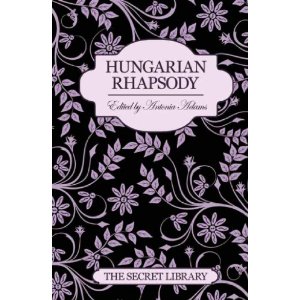 Restraint came about because of two things: one, Xcite asked me if I’d like to be a part of this fantastic project, and two, I really fancy Armie Hammer and wanted to write a story about him being a repressed maniac. And so I did!

Basically, my hero is all uptight about sex. My heroine is not uptight about sex. Shenanigans then ensue. I have to say, I absolutely loved writing this story – it came quite easily, because as you may or may not know, I love tales about girls teasing guys to the point of insanity.

So there you have it! My contribution to The Secret Library, in a nut shell. Here’s some links for it, if you fancy having a gander yourself:

And I would, because not only am I in this anthology, but so are Justine Elyot and Kay Jaybee. It’s practically a must buy!

How amazing is The Secret Library? Look at those velvety covers! They’re divine.

‘Artie, just fucking let go of me,’ I say, but he won’t, he won’t. And then somehow it’s just me and him, squirming and thrashing around in the bubbly water, limbs getting tangled, everything getting more and more frantic until…until…

We both go very still, all at once. I don’t mean to. Most of me wants to keep trying to get away, but once I feel the thing that’s very definitely happened I can’t even manage a weak wriggle. And as for him, well…he’s gone beyond rigid and into some state of temporary paralysis.

I turn my head just a little to see if I can make out an expression on his face, but there isn’t one. He’s just blank—so much so that I’d assume he was dead if I couldn’t see the flush creeping up over his cheeks.

And if I didn’t know what the hard thing was, that’s currently pressing right up against me.

Artie is turned on. The squirming or the words or fuck knows what has turned him on, and now his big stiff cock is apparently super-glued to your thigh.

‘Okay, well—’ I start, though I’m not sure how. I’m almost grateful he interrupts me, because God only knows what words I would have used to finish that sentence. I thought you were a Eunuch, maybe? I can’t believe you’re actually able to achieve stiffness, perhaps?

I just don’t know, and apparently neither does he.

‘Please don’t say anything,’ he says, but strangely he doesn’t blurt the words out in a mean way. He hardly sounds angry at all, anymore—just mortified. And though that’s perfectly understandable, I can’t help thinking even stranger things, as we lie like that in a sea of bubbles.

I’m practically on my back, over the little plastic seats beneath the water. And he’s almost over me, his legs between mine and his big chest pressed against my breasts. I’ve got one arm around him, though I don’t know when that happened, and the second I shift just a little I realise he’s got an arm around me, too.

We’re almost in some sort of weird embrace. Somehow, we’ve struggled and shifted until we’ve locked our bodies together in a very familiar shape, and the longer this silence goes on for the more obvious that fact becomes.

His hand is pressed to the small of my back. The way that men do when…you know. They want to get a bit of traction and maybe fuck into you harder. And I can feel something in him, too—a kind of tension, vibrating through his body. As though we were in the middle of a good screw and I suddenly told him to stop.

Don’t come yet, I think, mindlessly, and this giant awful thrill spills through me.

What if he is about to come? What if he jerks and spurts all over the insides of his shorts—or even better, all over me? I can’t for the life in me imagine what someone like Artie would look like, if they had an orgasm, but I can feel my mind trying to gather the image together anyway.

That tight, tense face of his, suddenly slack with pleasure. God, that mouth. Would he bite his plump lower lip, maybe squeeze his eyes tight shut? Someone like him would never moan, but the thing is—what if he did?

Grace Marshall: The Secret’s Out → ← The Story Behind the Story: Maggie Brooke
© 2022 K D Grace
Site created and maintained by Writer Marketing Services