The Story Behind the Story: Maggie Brooke

July 4, 2012   Tags: erotica, logical lust, maggie brooke, the story behind the story
Category: Guest Blogger   Comments Off on The Story Behind the Story: Maggie Brooke

It’s a pleasure to welcome a new voice to A Hopeful Romantic today. Welcome Maggie Brooke. I’m very excited to have an Australian Story Behind the Story, and Maggie’s novel, Guided Tour, sizzles in proper Down-Under fashion. If you’ve got AC, now might be a good time to crank it!

The brutal truth about the beginning of the story behind my story is that everybody kept saying, “Sex Sells!” so I finally decided to give it a go. The happy truth is that I love thinking about sex and it turns out it’s really fun to write about, too.

I came up with my female character first because only she could tell me where she was and what sorts of men she fancied. Once I realized that she was a wealthy white woman from Sydney stuck in Darwin then it seemed obvious that her antagonist should be a gorgeous Indigenous man. What would happen when polar opposites collide?

The story started to come unstuck when I tried to write about sex only because I was really liking both my characters and wanted them to connect on a deeper lever–and not just the one you’re thinking about! Louisa was so angry and confused, though, and Warren took such a moral high ground that a romance between the two seemed unlikely.

It was the setting that helped me out there. I have never been any place in the world that gets under my skin like the Australian Outback. The haunting cries of the curlews at night; the myriad of tiny yellow and purple flowers on a landscape where nothing should be able to grow; the wild scent of eucalypt and sand; the nearness of the sun and the number of stars…romance on a stick. 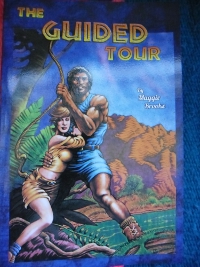 When wealthy Sydney socialite Louisa Smith takes a solo journey to the Northern Territory and gets arrested, she can’t charm or buy her way out of it because Daddy has cut off her credit cards! Stranded, she must work off a Community Service Order by escorting ten juvenile offenders on a guided tour of the Outback designed to teach respect for the territory and its people. This extreme punishment is made worse by her attraction to Warren George, their uptight, moral but absolutely gorgeous Aboriginal tour guide.

Sitting on a stone at the edge of the camp, I watched the quarter moon climb through more stars than I had ever imagined. I wished Claudia and Suzanne, and even Dalby, could be watching it with me. I’d bet that they didn’t even know a sky could look like this. In a sudden rush of homesickness, I hurried back to the tent and retrieved my iPhone from my boot. I needed to SMS an SOS to somebody–anybody! Returning to my rock, I flipped it open, turned it on and…

Waited for a signal that never came.

I watched the words SEARCHING FOR NETWORK flit back and forth across the screen for five minutes before I gave up and snapped it shut. Outback Australia! I might as well have been on Mars. I tried to find the red planet in the black sky.

The night lay still against my skin, caressing me with an unfamiliar peace and the air smelled…I don’t know…clean. All thoughts of old friends and new enemies soon left my mind. I heard a curlew call, and then another and another, but I didn’t know what was making those haunting sounds and wondered if I should be frightened. As I sat quietly I heard a door close behind me and turned to see Warren leaving the men’s shower block. He had not seen me.

He walked slowly, looking at the sky, wearing only a red sarong tied around his waist. His damp hair curled loosely around his ears and neck. The pale moonlight painted his muscular chest in dark relief and his legs were lithe and supple, the muscles rippling as he walked. He carried a towel and shaving kit and passed close by my stone. I made no sound, didn’t even breathe, but he paused, as if suddenly aware of my presence. He turned slowly to face me, eyebrows raised;  surprised it was me.

“Curlews. The old people say their call is lost souls calling to each other.”

“Of course not, they’re just birds.”

“An emu’s just a bird but I wouldn’t want to get up close and personal with one.” I smiled. It was nice talking to him without rules and kids surrounding us. “Do you take these trips often?”

“This is…” He started to say, but then his eyes dropped to my singlet where those naughty nipples strained against the cloth. He looked up at the stars and frowned. “It’ll be another long day tomorrow,” he said harshly. “You should get back to your tent now.”

His rudeness was uncalled for and my anger rose again, spoiling the night. Then I became aware of another rising. He was standing very close, and his scarcely clothed body was inches from my face–which was level with his groin. His sarong began to dance and gape and I couldn’t take my eyes away. I was mesmerized. He crossed his hands, strategically using the towel and shaving kit to hide his interest and turned away, frowning.

“Go to bed,” he commanded and rushed away to his own tent.