Writers write in solitude. That’s one of the pleasures as well as one of the hazards of the job. We need other people. We need interaction, but because writers tend to be introverts, extroverted events can be both tremendously exhilarating and totally exhausting. I’m writing this post somewhere in between the two. I’ve been basking in the afterglow of Eroticon 2013 all day, looking at all the lovely tweets and posts, reading the blogs and remembering, and reflecting, and analysing. I’ve nabbed photos from Lucy Felthouse and Victoria Blisse, and I’ve now downloaded my own, which gave me another chance to relive the amazing event. It gave me another opportunity to marvel at the organisational skills of Ruby Kiddell, which absolutely border on genius. It gave me another opportunity to be astounded by Harper Eliot’s ability to hold up under stress with finesse and grace and still pull off a stunning evening of aural sex when things didn’t quite go to plan for the readings! Hats off to both of you! You rock! 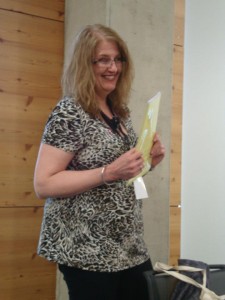 As always, I didn’t get nearly to all of the courses I’d wanted to. That wasn’t just because there were too many delicious offerings happening at once. It was also because there were times when I was torn between attending the courses and continuing with a conversation in the meeting room with someone I knew full well I wouldn’t see again for another year, if not longer. The courses were fabulous. For every one I attended, there were two more I’d like to have attended. Though I have to admit for me, who quake at the very thought of writing a poem, Ashley Lister’s poetry workshop was the highlight. Remittance Girl’s fascinating talk on eroticism and romanticism was also amazing and has given me food for thought for a long time to come.

Teaching a writing workshop for the first time ever, and on the afternoon of the last day, meant that I spent a good part of my weekend trying not to angst too much about how I’d manage to convey what I live with and love passionately to a roomful of people I knew  all had their own passionate love for writing. I needn’t have worried. I was in good company, company that completely understood where I was coming from and were eager to participate. I came away feeling like I’d gained far more than I’d given.

I had the chance to spend a quiet hour talking to, Hazel Cushion, the MD of Xcite Press. I had the

chance to finally meet the amazing Suzanne Noble in person. I had a chance to spend time with Janine Ashbless, Kristina Lloyd, and Rachel Kramer Bussel. I chatted with Maxim Jakubowski. I had a chance to finally meet Anonymous Lily. I had my picture taken by the fabulous Mario Cacciottolo for his ‘Someone Once Told Me’ project, while I shared my adventures in Lapovo with him. I know for every person I’ve mentioned I’ve left out six. And every one of them made me feel richer and deeper.

I won’t lie. I came to Eroticon 2013 for the community. That’s what I came for last year and that’s what I’ll come back for next year. And I SO wasn’t disappointed! On Friday night for the ‘pre-game show,’ I had the pleasure of a fabulous ladies night out filled with burlesque at Volupte. I was in the company of Kay Jaybee, Lucy Felthouse, Victoria Blisse, Lily Harlem, Lexie Bay and Tabitha Rayne. At Volupte, we caught up with Delores Deluxe, the fabulous Kittens of the Kitten Club, along with the totally yummy Dave, the Bear. There 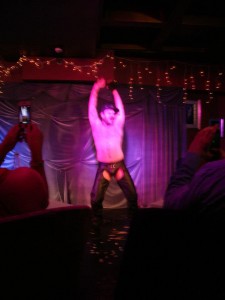 was dinner and laughing and cocktails and planning and scheming and catching up.

Last year at Eroticon, Lucy Felthouse, Lily Harlem, Victoria Blisse and I spent a late night after Eroticon at the hotel bar dreaming and scheming what became The Seven Deadly Sins anthology, published in December. This year as we all sat in the hotel bar with the welcome addition of Lexie Bay and Tabitha Rayne, Lily surprised us all by producing a scrap of paper from her notebook. It was the same scrap of paper on which we had schemed The Seven Deadly Sins a year ago! I don’t mind saying my heart did a little flutter dance at the thought of the rich well-textured, beautifully vulnerable, outrageously funny moments that had led to those scribbles on that piece of paper.

The depth of the creativity and the sense of community I feel with my old friends in erotica, whom I can never get enough of, and with those that I’ve just met that I feel like I’ve known all of my life still astounds me. There’s a sense of celebration of what the last year has brought about linked to anticipation of what the future holds. It’s all about community for me, about who we all are together and separately, about what we all can offer up to each other and what we all receive in abundance by being a part of something so vibrant and so hope-filled. There’s also a wonderful sense of permission granted, a 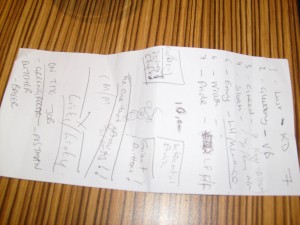 sense of encouragement offered, a sense of ‘well, go on then. Just go do it. You know you want to, and we all know you can.’

I came away feeling more than myself on the one hand and more deeply myself on the other. I came away anticipating what I’ll create between now and Eroticon 2014 and what we all will create, because looking back at this weekend, how could what comes from it be anything less than stunning?