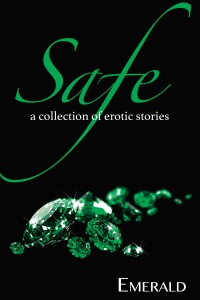 Thanks so much for having me today, KD—I’m so delighted to be back at A Hopeful Romantic talking a bit about my brand new short story collection, Safe!

More subtly, I actually perceive the happy ending requirement of romance to be a happy ending of a rather specific type: that in which the main characters, who have been or are romantically involved, are implied to continue or remain that way (contentedly!) for the foreseeable future. Characters in my erotica, for example, may well end up happy as well, but it’s often had little to nothing to do with any kind of ongoing or developing relationship between them. Their sexual interaction may have left them quite content, but they may feel no desire to continue that interaction or develop a romantic connection. Many stories I’ve written have had these kinds of endings, and there are some with this type in Safe as well.

Perhaps most atypical of much of the contemporary erotica I have read, however, Safe also has stories that do not have particularly “happy endings” as they have often seemed defined in literature. And here there may be some readers of erotica as well who digress in preference from this occurrence. To some readers, as I have interpreted it, erotica is for purposes of arousal, and some don’t consider a serious or poignant ending to lend itself to such. 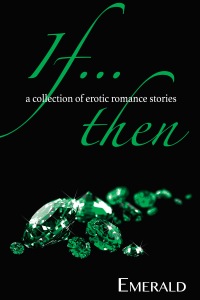 As such, there are a few stories in <>Safe that do not end neatly and/or with contentment and satisfaction. At no point did I write anything for Safe (or do I feel compelled to write anything in general) that ends tragically or wrenchingly simply for shock value. That is not at all the point. Rather, the stories “end” as the closing of what we have glimpsed of the characters lives, and sometimes what appears to be going on in those may encompass challenge, pain, and/or loss.

I don’t want to give the impression that all the stories in Safe end poignantly—they don’t (from my perspective, anyway!). A few of them, as I see it, do. Personally, I understand the desire to read something I know is going to turn out a way that won’t likely elicit a challenging emotion in me. I have sought out that kind of work in the past and felt that way often. As an author, however, I also appreciate exploring what appears to me to authentically reflect the facets of human experience that come through me as I’m working. As I see it, that is one of the fundamental purposes of art.

Ultimately, the aspiration in me in writing every story in Safe was to explore and display the power of sexuality to heal, connect, awaken, and elicit growth. This is how I see the purpose and power of sexuality in life, and as an author of erotica, that is what I am aiming to write. Sometimes the result may seem uplifting, and sometimes it may seem painful. Sometimes, as in life, if we pay a particular level of attention, we may see both at once.

“To Make It That Way” shows older woman Cole taking young Zack on a seductive and wild ride, exposing him not only to a considerable sexual education but to more subtle life lessons as well. “Power Over Power” channels the intense energy of a martial arts session, while “Hers to Keep” offers Leslie a surprising lesson in so-called “casual” sex.

—
Excerpt from “To Make It That Way” in Safe:

Cole’s eyes glinted. “Sex,” she said, “has the potential to encompass and represent all human experience. All the nuances, all the understood and not understood, may be experienced through sex. And that means there’s a whole realm of it we’re not going to understand. It’s beyond our common forms of understanding.” Her eyes bore into me like steel. “But it’s not beyond our experiencing.”

After a moment she broke her gaze, and I noticed I started breathing again. I also noticed my cock was rock-hard.

“The key,” she said, lifting her water glass from the end table near where we stood, “is in awareness, respect, openness, authenticity. We don’t have to understand it all, as long as we’re aware of ourselves. As long as we respect our partners. As long as we approach with openness what is happening between us. And as long as we are authentic in our dealings, our experiences, our examinations. If something is uncomfortable, examine that and see what it teaches you. If it feels inauthentic, stop doing it. ”

“That wouldn’t account for a lot of abusive situations where sex is concerned,” I countered. “Lots of people may think they’re aware of and like what they’re doing, but it hurts someone else or is even criminal.”

“Yes,” she agreed, setting her water glass back down. “But that means at least one of those pieces is missing.”

I pondered that, as she didn’t appear inclined to expound. She moved toward me and caught my mouth with hers, and I caught my breath at the suddenness, at the heat that zipped through me like lightning at her touch. She backed me up against the couch until I fell onto it, my hands groping her breasts. Pulling my cock out of my jeans, Cole dropped her head and sucked with fervor, going after my cock like she was possessed, as though she was taking something from it she needed.

With a final pump, she paused, running her tongue up the length of my shaft. Her cat-like eyes gazed up at me, hard lust and a hint of something else glowing in them. Abruptly she stood up on the couch, towering over me as she pulled off her shirt and stepped out of her jeans. Underneath them she wore an impeccable red lingerie set, glimmering bra, thong, and garter belt with rhinestones embedded around the rims and matching stockings. I caught my breath.

Cole didn’t need lingerie, but she sure knew how to use it.

Stay With Me by Layna Pimentel (@LaynaPimentel) → ← Lady Sally Rudston-Chichester: A Story of Power and Class in the Edwardian Country House