Stay With Me by Layna Pimentel (@LaynaPimentel) 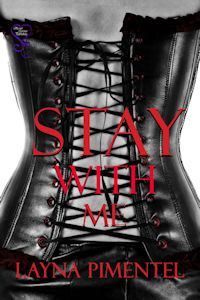 Master Alex is furious when a friend’s submissive invites a naive stranger to his party. With his reputation on the line, he must keep her out of trouble and away from curious Doms. Observing signs of interest from her, he leads her down the path of wicked temptations. However, when his ex-sub pushes her way back into his life, he tries to find a balance between his discreet life and his public one.

Mercedes is fearful of the world she’s stepped into, but the curiosity of what pleasures lie beyond keep her interested in far more than the play. All is going well until a jealous woman convinces her she’s out of her league. Desperate to regain control over her life and heart, she pushes Alex away.

Will these two manage to find their way to each other, or is their relationship doomed from the moment they meet?

Mercedes popped an eye open to see the candle nearly burnt out. I don’t remember lighting this last night. Oh! The weight of a large arm wrapped around her, and the sheet hung off the edge of the bed. Alex! He spent the night.

He groaned into her ear as she adjusted her position. As she did so, there was a knock at her door. Mercedes gently lifted his arm and rolled out bed, grabbing her silk robe from behind the bedroom door and glancing at the time on the digital box, which read eight-o’clock.

Who the hell could be visiting so early? She’d paid the landlord three months in advance, and she hadn’t really met anyone to expect house calls.

From behind the door she called out “Who is it?”

Shit. What now? “Poppy, it’s not really a good time. I was sleeping.”

“Just open the damned door. We won’t take up too much of your time. We just want to make sure you’re okay.”

Mercedes sighed. Reluctantly, she did as she was asked, and they made their way inside. “I’m sorry I don’t have any coffee, guys. I haven’t even been here long enough to go grocery shopping.”

“That’s all right, sugar. We only stopped in to see how you were holding up after last night,” Brian spoke up.

“I’m fine. Really. Though it was a shocker that Poppy would even think to invite me. But, as you can see, I made it home safe and sound, eventually.”

Never mind the fact that she had walked into a sick joke by Alex’s ex-sub—or whatever the heck she was called—Mercedes wouldn’t forget last night any time soon. The moment she had a chance to take up the issue with Poppy, she would. But not until they were alone.

As she sat across from her company in the armchair, Mercedes clenched her butt cheeks and relaxed them. She couldn’t get comfortable with the damned plug in her ass, and squirming or pouting wasn’t going to make it go away any time soon. Shoot! I forgot that was still there. “Is there any reason why this conversation couldn’t have waited ’til a more decent hour? Christ! It’s Saturday, and I had a long night, if you hadn’t noticed.”

Brian smirked and peered around her to look on the dining room table where Alex had left his jacket. “You never told us you had company.”

“Well, that’s because you never asked. Last I checked, I didn’t realize I had to inform you.”

He snorted, patting Poppy on the knee. “You’re a cheeky one. I can see why you and Poppy get along so well. We’ll be on our way.”

“So soon? I thought we might all go out for breakfast,” Alex announced from the bedroom door, wrapped in nothing but the bed sheet.

Mercedes flushed like a child caught with her hand in the proverbial cookie jar. Great. Now, everyone knows the kind of things we’ve been doing together.

“Christ, Mercedes. There’s no need to be shy. We’re all adults here. Now, come in here and get dressed so we can go out for some food. After that, I’ll take you to the grocery store.” Alex nodded to his friend. “Brian, how about you and Poppy meet us at Alessandro’s family diner?”

Mercedes was so embarrassed by the chance meeting between her friends and lover that she couldn’t meet his eye. I can’t believe he just did that. He might as well have stood there naked. Mmm…now there’s a thought.

Alex prancing around her apartment in the nude made for perfect entertainment. Who needed art to hang on the walls, when one swift look at his impeccably well-kept form was pleasurable enough? Just how did I get so lucky? If someone would have told her a week ago, that she’d move back to her hometown and find herself in the arms of a handsome, built, and uber sexy gentleman, she would have called them a liar.

She wasn’t exactly the perfect zero, or whatever the preferred size of women was these days. She was a healthy size twelve, with large boobs and a generously curvy butt.

For years, she had struggled with weight loss and trying to keep up with the social norm. But no matter what fitness center she joined, or fad diet she tried, her svelte body always came back. She’d practically given up thinking that anyone would accept her body for what it was. That is, until now.

She imagined reaching forward and yanking the sheet from his body. Damn. Today is shaping up to be a good one.

Born and raised in Toronto, Ontario, Layna discovered her love of reading at an early age. When she isn’t devouring salacious romance novels or writing, she enjoys losing herself in researching ancient history and mythology, weaponry, and hiking. She lives in Northern Ontario, with her husband and two daughters.

Layna is a member of the Romance Writers of America, creator of the Romance Author at Large blog, and is a monthly contributor at 69 Shades of Smut. For updates on her upcoming releases, or to leave her a comment, you can find at: