Identity Crisis, the second novel of the The Executive Decisions Trilogy is out, and Grace Marshall and I couldn’t be more excited! In so many ways The Executive Decisions Trilogy feels like my coming of age story as a writer. It started out five years ago as a novel called The Executive Sex Clause. Back then it got rejected multiple times for being too risque. But that was pre Fifty Shades of Grey. With romance that has a little more heat and a little more raunch dazzling the reading public, the time was right. It was as I revisited Dee and Ellis and their story that I realised there was way too much going on in The Executive Sex Clause for it to be only one novel. Once I realised that the story was really a trilogy, it was full steam ahead!

When An Executive Decision, volume 1 of the trilogy, came out in September, it was so well received that I was asked to hurry along the rest of the trilogy, which was already in my head, so it was just a matter of getting it down. As is always the case, the characters surprise me in so many ways when I actually engage with them on the written page. I had spent nearly five years with Dee and Ellis. We were already old friends when I wrote the final version of An Executive Decision, and even then, their story had twists and turns and insites into their personalities I hadn’t expected.

If Ellis and Dee surprised me, Kendra and Garrett had me gobsmacked at every turn. Once I allowed them to take centre stage for Identity Crisis, they took me on a roller coaster ride of love, sex, fun and flat out fear that I never would have expected. Their journey is a detour into dark places where different kinds of executive decisions have to be made, some of them involving survival itself. I hope that you enjoy Kendra and Garrett’s story as much as I enjoyed writing it, and here is a little teaser to get you in the mood for The Golden Kiss!

Print release will be soon! 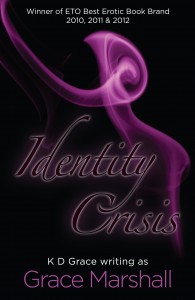 Excerpt (At the Golden Kiss Awards):

Garrett was never a hundred percent sure about what happened next, though he did play the events over and over in his head many times afterward.

He read Kendra’s body language before he was able to see, from his poor vantage point, what was actually happening. Kendra’s spine stiffened and tension tightened her shoulders, which until now had been completely relaxed.

‘As you know I’ve reviewed all of your novels very well, very well indeed.’

Bullshit, Garrett thought. He had always approached Tess Delaney’s books, as he did all romance novels, as though they were the bastard step children of proper literature, and the best he’d ever said about Tess’s work was that it was not bad for what it was, and that it was a pity such talent was wasted on such low-brow literature. As Blessing’s hand moved up high on Kendra’s right thigh, Garrett had visions of strangling the man with his bow tie

‘I’m sure that my reviews were taken into consideration in these awards, Tess, I can call you Tess, can’t I?’ He addressed Kendra’s cleavage, ‘So in a small way, I guess you could say I’m responsible for you carrying away that lovely piece of metal. And I’m willing and able to help advance your career in ways you haven’t even thought of.’ His thumb slid beneath the soft green fabric of her dress and his fingers followed suit finding their way to Kendra’s bare thigh.

What happened next seemed to unfold in slow motion. Garrett rose from his chair and grabbed the bastard by the back of the collar just as Kendra looked up and caught his eye, then she shook her head and mouthed the words, ‘sit down.’

He didn’t. He just couldn’t let the bastard touch her like that. But before he could bodily heave Blessing out of his chair, before he could even do more than lay a hand on the man’s jacket, Kendra, without so much as batting an eye, daintily and very deliberately dumped her entire chocolate mousse upside down onto the lap of the man’s white suit, making sure to give it a good hard shove, adding a slide from side to side so there would be no easy clean-up. The whole incident might have been subtly covered up if, at that moment, one of the cameramen hadn’t chosen to zoom in for a close-up of the beaming winner and catch the whole magical moment and multiply it and enlarge it on the big screens that surrounded the room resulting in a raucous round of applause.

And that was when Garrett decided it was time they made their exit before he did the man serious bodily harm. He cupped her elbow in his hand, helping her from her chair. The applause was thunderous.

‘Garrett,’ she spoke between clenched teeth, ‘What the hell are you doing? We can’t leave before the press conference? Garrett!’

‘Fuck the press conference,’ he growled. ‘We’re leaving now before I kill the bastard.’

For a split second he was sure she was going slap him. Her eyes blazed blue fire and her lips were parted, to make room for each accelerating breath.

‘Now,’ he said, tightening his grip on her arm.

She blushed ever so slightly, made a little curtsey to the applauding crowd, then yielded to Garrett’s none-too gentle tugging. As the room fell silent, all except for the sputtering and cursing of Barker Blessing, who was now being ministered to by a couple of the male wait staff wiping at his bemoussed crotch with white linen napkins, the two walked out of the room with all the dignity of royalty. Without a word, they quick marched down the stairs into the foyer and out into the warm summer evening where Garrett practically shoved her into the waiting limo, the Golden Kiss Award still suicide gripped in her hand. 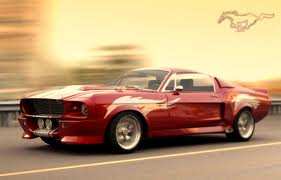 Once the limo pulled away from the curb, Garrett pried the award gently from her fingers, then hefted its weight. ‘I’d say the bastard was damn lucky he got the mousse in the crotch instead of the Rodin up side of the head.’

Kendra forced a pained laugh, in spite of herself, and he could tell her control was near the breaking point, but he didn’t care. He didn’t!

As the anger dissipated slightly from her face, she took a careful breath and said. ‘Garrett, you should have let me handle it. I’ve had to deal with gropers and droolers and all sorts, and I know what an asshole Blessing is. I was ready for him. Really I was. But you forced my hand. Damn it, you forced my hand.’ Her grip on the leather arm rest was white-knuckled, and Garrett was pretty sure it was in attempt to keep from punching him good. ‘You should have let me handle it. That’s my job, Garrett, that’s what you’re paying me for, and frankly I –’

‘Shut up, Kendra.’ He risked life and limb by stopping her words with a hard kiss, followed in quick succession by several more. The wild and furious battle between her tongue and his came as a total surprise. When they both pulled away in a breathless gasp, he said, ‘I’m sorry. I fucked up. I couldn’t stand him touching you. If you hadn’t moussed him I might have done something that would have required my brother to bale me out of jail, and that would have completely ruined Tess’s evening.’

‘Kendra, you only did what every writer in that room and all the writers watching from home wanted to do. I can’t imagine the consequences of your actions being anything but good. You were stunning and amazing. And right now I want you so badly I can hardly stand it.’

For a second Kendra froze, her whole body tensing, her eyes locked on his. The only sound was their heavy breathing above the soft purr of the limo engine. Garrett was sure this was the point at which he got slapped again. He held his breath.

At last she found her voice. ‘That makes two of us,’ she whispered.