It’s been a wild and exciting week, and I’ve struggled to figure how to share the most with all of you without repeating what’s already been said and 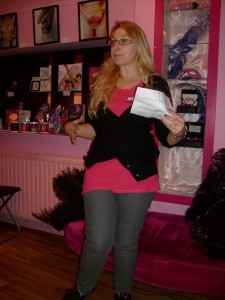 without making extra work for myself. Not that I’m lazy, and not that I don’t love chatting with you lot, but I’m hard at it writing The Exhibition, Book three of Grace Marshall’s Executive Decision trilogy, and I’m so excited about how it’s coming along that I’m anxious to keep working.

But at the same time, I definitely wanted to share the adventures of the last week, starting last Saturday with the Double Whammy Launch Party at Sh! Women’s Store and continuing on through Tuesday night with the Kinky Workd Book Night hosted by Xcite and arranged and put together by Xcite’s fabulous new PR staff members, Lauren Thomas, Claire Travers, and the mysterious Greg.

There were hot, sexy readings, there were giveaways, there was burlesque, there was an open mic, there were Q&As and there was loads of fun. I decided the very best way to share that fun was to give you a few smuttymini excerpts from the events along with an excerpt from Moorita Encantada’s fabulous performance from the play we’re collaborating on, The Eye of the Beholder. So enjoy the piccies and the naughty excerptlets. 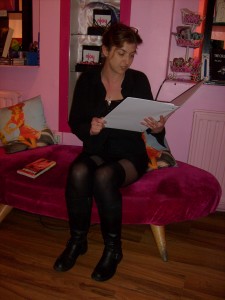 At the Double Whammy Book Launch Party there was so much going on it was hard to know where to look. And it all began with one of my favourite Sh! Ladiez, Jo Wierzbicka, reminding all of us naughty folks that only one person is allowed into the bathroom at a time. *wink, wink, nudge, nudge*

Though Kay Jaybee read from her fabulously naughty book, The Perfect Submissive, she also gave us a sneak preview of her sequel, book two in the trilogy, The Retreat.

‘It’s fascinating, isn’t it?’ Mrs Peters seemed to be reading her mind.

Jess felt goose pimples sprinkle her flesh as her employer continued to speak in whispers, her warm breath tickling Jess’s ear, ‘He’s a strong young man. He is good looking. He could dominate any girl he chose, and yet here he is, getting his rocks off by crouching in obedience before a powerful woman.’

Hastened into position by his mistress, Paul’s shirt was torn from his back, his smooth torso bent over the desk’s leather inlay, and his outstretched muscular arms grasped each side of the desktop. Jess gasped at the sight of his arse. It was truly gorgeous. She was so close to him, only two metres away. She could smell his desire and almost taste the frisson of fear that ran down his spine; prone and vulnerable, as he anticipated the first strike. The Perfect Submissive

Most of you already know that I’ve been scheming and plotting with the multi-talented Moorita Encantada to write and put together a burlesque play. Saturday night was the first ever sneak peek at The Eye of the Beholder, the story of Medusa and Perseus with a twist, and a  stunning performance by Moorita in the staring role as Medusa. 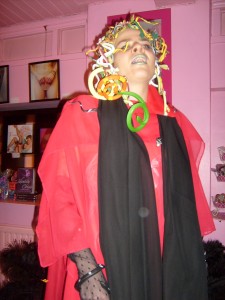 Moorita Encantada performing as Medusa from our play, The Eye of the Beholder

Arrogance can be sexy. Not his though, his was simply stupid. No woman is going to defeat him, he said. He was a warrior, he said, strong and quick on his feet. He’d finish me off and be home in time for dinner with my head as a trophy.

This one, yuk, this one should have never come..! What was it that inspired such a coward to face my wrath? A bet? A few too many pints down the pub? Honestly, trembling before a woman is only arousing if it’s because her beauty takes a man’s breath away, if it’s because he loves her and adores her and wants her more than life itself. Not because he’s so afraid he’s about to piss himself. He should have stayed in his room playing World of War Craft.

Medusa’s monologue from The Eye of the Beholder

Because I had two new releases very close together, I read from both of my latest, Grace Marshall’s Identity Crisis, and book three of K D Grace’s Lakeland Heatwave Trilogy, Elemental Fire. I could hardly remember from one minute to the next just exactly who I was.

My reading from Elemental Fire

She took him into her arms and kissed him hard, and when he feared he would disgrace himself again with his cock pressed up tight against the top of 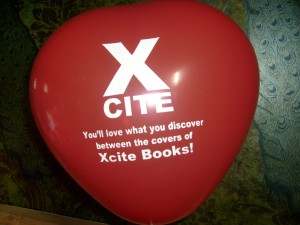 her belly, she pulled away. ‘However,’ she said. ‘If I grant your request, then I will possess you. All of you. You will belong to me, your life will mine.’ She gaze was painfully bright. ‘And if you earnestly wish to be rid of Deacon, then you will do as I say for as long as it takes us to accomplish our task, and it will take time. I know him. You don’t. I’m his equal. You’re not. And one more very important thing, Kennet Birch.’ She stroked his hair gently and whispered against his lips. ‘Never, never forget how badly I can hurt you if you defy me.’ Then she guided his hand down over her pubic curls. ‘If my terms are not acceptable to you, then you must return to your body and face your fate.’ Elemental Fire 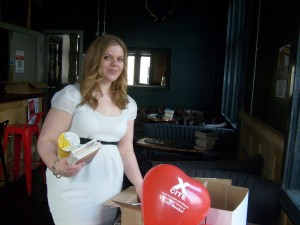 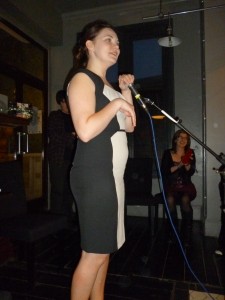 We barely had time to recover from the weekend before we were off to Cardiff for the exciting Kinky World Book Night, an event we’d all been excitedly waiting for. Lauren, Claire and Greg were fabulous hosts for the event, held at the Fire Island Bar, and we were especially lucky to be joined by smutty author extraordinaire,  Lily Harlem, who didn’t read, but cheered us on, and of course the unstopable Lucy Felthouse. After a really insightful and fun Q&A, there was an open mic with some fabulous new unpublished (thought I have no doubt that will be changing soon) talent, in addition to the delicious and talented Black Silk. I think it’s safe to say a naughty time was had by all.

Taking a step forward, Mark pulled hard on the lead so that Anya’s neck jerked toward his legs. ‘My bitch here is guilty of questioning my requests.’ 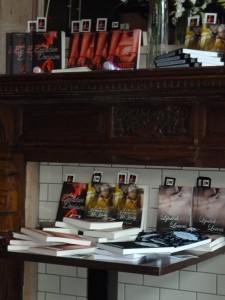 Abruptly the room fell completely silent, and everyone turned to see what was happening as Mark’s voice boomed out. Keeping her voice lowered, Anya stared at the dusty floor.

Opening the lid of his box, Mark pulled out a large piece of folded white card. As he unfolded it, he dragged Anya to one of the unoccupied rings on the wall before securing the lead to it, ensuring she couldn’t stray. Then he stuck the rectangle of card upon the wall next to her tethered body.

In bold black type it said, “Do what you want to me, but I must not be satisfied. I have been very bad and I do not deserve it.”  The Voyeur 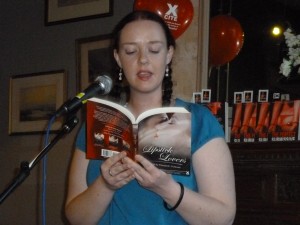 Lucy Felthouse’s reading from Off the Shelf

Dropping onto her back, Annalise lifted her bottom, hooked her thumbs into the sides of her thong and shimmied out of it. She flicked one foot and sent it sailing across the room, then sat up, unhooked her bra and sent it in the same direction. She was just about to grab the top of one of her hold-up stockings to roll it off when Damian got back onto the bed and crawled over to her.

‘Don’t,’ he said quietly, pushing her onto her back once more. ‘leave them on.’

‘Ooh,’ she replied, shuffling backwards up the bed so her head was on the pillow, ‘like them, do we?’ Off the Shelf 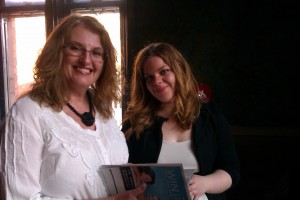 She turned on him. ‘Oh pa-lease. You deserved it. You’ve deserved everything you got so far, and last night, well if you’d have just let me handle it, then this,’ she stabbed a finger at the door, ‘this wouldn’t be happening.’ She jerked off the robe and stood naked in front of him tugging her panties up over her hips and then shoving into the green dress. And fuck it was hard to stay focused with her doing that. Did she do that on purpose – get his cock’s full attention so his brain wouldn’t work? She probably did. She was a bitch, he reminded himself. How the hell could he forget the number one fact about Kendra Davis? The woman was a bitch. Interact with her at your own risk. He watched her stuff her stockings and garter belt into her bag like they were the enemy, and he was sympathetic.

‘Where’s the back door,’ she said.

‘Through the kitchen,’ he replied, his brain still half-occupied by her angry reverse strip-tease that had left him in a bad way. ‘Wait a minute. Where 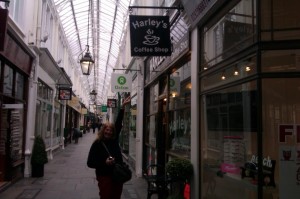 are you going? What are you doing?’ He followed her into the kitchen with her stumbling into her killer heels as she went.

‘Fixing it,’ she huffed.     Identity Crisis

We all came home exhausted, but happy. What a fabulous experience and another happy reminder of some of the really cool perks of writing erotica,

including lunch with our fearless leader, Hazel Cushion, dinner at Pika Pika with Lauren, Claire and Greg, and breakfast with Kay Jaybee, where else but the Harley Coffee Shop! How could such a week not inspire me to write more naughty, sexy, romantic stuff, and that’s how I hope to be spending the next few weeks, hard at work on The Exhibition.