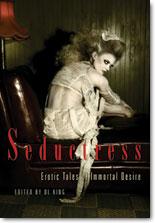 So, K D and I were going to have this really great discussion about sex and the paranormal, or as she put it, “things that go bump in the night” but due to circumstances beyond my control, I was unable to get it done.  Instead, I wanted to give you an excerpt  from one of the stories in Seductress that treads that line really well.

This is from “The Girl on the Egyptian Escalator” by N J Streitberger.  After having been well and truly fucked (involving, among other things,  a full bottle of champagne and oral sex…) Spencer decides to find out a little more about his new girlfriend.

The following morning having called in sick, he looked up the number of the British Museum and dialed. Three tablets of Berocca fizzed noisily in a glass on his faux granite kitchen counter.

“Hello. Can you put me through to the Egyptology Department?”

“Oh, yes. Hello. I am trying to trace one of your consultants. I am doing some research and someone gave me her name as a possibly useful contact.”

“Is this some sort of joke?”

“Oh no, not at all. But I assume there can’t be many people with that name working there.”

“I can assure you, sir, that there is no one of that name working here or associated with the Museum. Not alive, at any rate.”

“Sekhmet is the name of an Ancient Egyptian deity. There are several extant images of her in existence. It is highly unlikely that anyone would name their daughter after her.”

“Why would that be?”

“Because she is considered the most formidable and destructive of the Egyptian gods. She is usually depicted with the head of a lion. In the Ancient Egyptian world her name is synonymous with overwhelming female power and bloodshed. She is also known as The Mistress of Dread or The Lady of Slaughter.”

“Now, if you’ve quite finished wasting my time, I have better things to do. Goodbye, sir.”

Poor Spencer.  But that’s what the mix of things that go bump in the night and sex is all about.   So, crank up the adrenalin and  dip into Seductress.

Empty Nest Time Three → ← These Boots are Made for Reading! Kinky Boots is Now Out!

2 Responses to “D.L. King Shares a Peek from Her Fab New Anthology, Seductress”