Coast to Coast with Holly: Let the Walk Begin

I had hoped to be able to send out very polished updates from our Coast to Coast walk every day, complete with photos  links, dancing girls and fire eaters, however there were two things I hadn’t taken into consideration. First, I hadn’t counted on how hard it would be to get a good signal on some bits of the walk, but that really was secondary to the fact that I hadn’t counted on how tired I would be at the end of each day. Those are my excuses for the first real update not coming until we are a full week onto the walk. Because of the latter, I apologize in advance if the next few blog posts are a little rough around the edges. My brain is nearly as tired as my feet. I’ll do my best to make sense. Finally, I’m having trouble downloading photos onto the website. But will get them added as soon as possible. 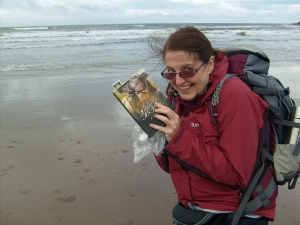 We left St Bee’s Head around 9:45 this morning, after we followed the time-honoured tradition of wetting the tips of our boots in the Irish Sea and collecting a pebble from the beach to leave on the beach at the North Sea in Robin Hood’s Bay when we get there 190 miles later. Holly got a pebble too, a rather small one, since I have to carry it. 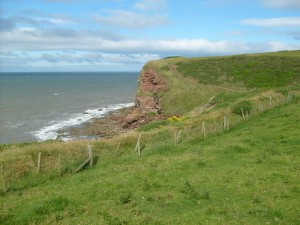 created by the late great Alfred Wainwright in the 1970s. It begins at St Bee’s Head on the Irish Sea, in Cumbria and crosses the Lake District, the Yorkshire Dales and the North York Moors before arriving at Robin Hood’s Bay on the North Sea 190 mile later. Today we walked from St. Bee’s Head to Ennerdale Bridge, and for the next five days, we’ll be walking across the Lake District National Park. As I said, we’re walking with friends those first five days, then the next nine we’ll be on our own. I’ll do my best to provide updates whenever the signal allows.

The first two hours of our walk were along the red sandstones cliffs overlooking the Irish Sea. St Bee’s Head is actually the furthest point west in England other than Cornwall, and when we reached the Lighthouse, we were farther from the East Coast of England than when we actually started but the spectacular cliff walk made it worth the bit of back tracking.

The weather threatened several times, but by the time we headed inland around ll:30 on the other side of Birkham’s Quarries, the skies were clearing and the weather was feeling steamy. We walked through farmland and the old slate mining village of Moor Row until we got beyond the village of Cleator, where we stopped in a grassy field for lunch. Then we made our first real ascent of the day, up the fell of Dent. It’s only a thousand feet, but it’s the first thousand feet and it worked us all. We don’t get many thousand foot ascents in the Surrey Hills. 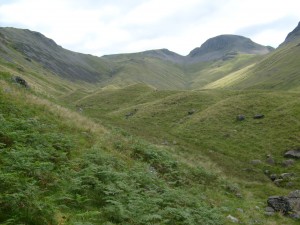 We came down off Dent very steeply into the Nannycatch Valley at Nannycatch Gate. Nannycatch Gate is the entry point into The Lake District National Park, which is the first of the three national parks we’ll walk through while doing the Coast to Coast. We ended our day 14 ½ mile into the Coast To Coast at Ennerdale Bridge, with time for a pint of Ennerdale Dark at The Shepherd’s Arms pub. By the time we got back to our accommodations, showered and had dinner, most of us, including yours truly, had about enough energy to go over tomorrow’s rout together and fall into bed. 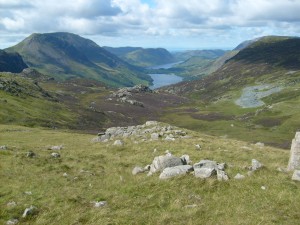 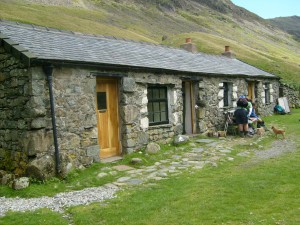 Today was another 14 1/2 miler. We walk from Ennerdale Bridge along the whole length of Ennerdale Water, the only lake in the Lake District with no road around it. I don’t know why today seemed easier than yesterday. Technically it was a much tougher walk with some serious Lakeland ascents. We walked the first two hours along the gorgeous Ennerdale Water. The hillsides were just beginning to blush with the mauve bloom of the heather. Add to that ducks bobbing on the water and the occasional leap-frogging of other folks who started the C2C when we did, all happening to the soundtrack of water lapping the shore, and it was a fabulous start to the day.

At the end of Ennedale Water, we followed a logging road along the River Liza with the fells of Pillar and Steeple looming large beyond. We walked to Black Sail Youth Hostel, one of the most remote in England and had lunch there in the shadow of Great Gable and Green Gable with Scafell Pike peeking from in between the two. The hostel is an old shepherd’s bothy in the middle of nowhere on a crossroad of several major walking routs, and a totally lovely place to sit in front of and have lunch.

Once we were properly fed and watered, we started the long climb out of the Ennerdale Valley along Loft Beck. This is a place where Coast to Coasters often miss the trail and end up on Green Gable, way off course. Raymond and I were staying at Brian and Vron’s B and B several years ago when Brian was called out for Keswick Mountain Rescue on just such a case. It was easy to see why so many people go astray there, as the rout up Loft Beck is by far the least obvious until we’d crossed the beck and actually started the steep, stony ascent.

Once out of the valley, we continued our ascent to the high point of the walk along the rocky Moses Trod, affording us gorgeous views out over Buttermere and Crummock Water and all the fells surrounding. Moses Trod is an old packhorses trail used for taking slate from Honister Mine to Wasdale Head and on to the coast at Ravenglass. However, the namesake of the trail used it for another purpose – smuggling whiskey.

From Moses Trod, we began our descent along the track of a disused mining tramway toward the Honister Slate Mine. The scars of the slate mining industry were obvious on the fells in front of us and strangely fascinating in their regularity. In fact, the pyramidal Fleetwith Pike is actually hollow inside from all the mining. Brian informed us that the vast cavern beneath has been used in the past for Mountain Rescue training exercises. It’s easy to see why Wainwright was so fascinated with the industry that was the bread and butter of the Lake District for so long.

The Honister Mine is once more operating, but on a very small scale. It now operates a visitor’s centre and, is in many ways, a living museum to a way of life all but gone. There are regular tours and lots of displays of this area’s fascinating slate mining past. We lingered for tea and the use of proper toilet facilities before continuing the gradual descent into the Borrowdale Valley. The Borrowdale Valley is the lovely valley in which most of the action in Lakeland Heatwave takes place, so it and the fells around it are very dear to my heart. We ended our day at the village of Rosthwaite on the Derwent River just a few miles from Keswick. 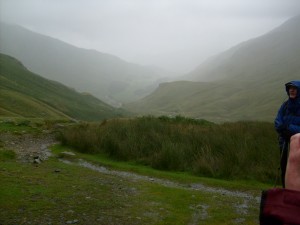 The end to fabulous weather was inevitable, and I woke in the middle of the night to the sound of driving rain and wind. As we prepared to leave for the day’s walk, Brian informed us that would be doing the walk for day four instead of day three because of heavy rain and flooding of the streams that crossed the trail. It wasn’t hard to see the wisdom of his decision once we began our ascent in the driving rain and wind. Even then we ended up having to take an alternate route because of a bridge being out. We got rained on all day long and battered by a cold north wind. Breaks were taken hurriedly, hunched over our packs with our backs to the wind. In spite of the weather, we had a great walk all in all. Raymond and I have had several walks in this particular area of the Lake District before and were familiar with the surrounding fells. But until today we’d always seen them in sunshine and lovely weather. Though I don’t relish being wet and wind-battered, I have to admit the power of even what by Lakeland standards, must have surely been a mild storm in the fells was extremely impressive, and I liked the feeling even while it frightened me more than a little bit.

Though it was a shorter day, everyone was exhausted when we got back to our accommodation. The drying room was full of wet, steaming walking clothes and boots stuffed with newspaper. Traditionally day three of a cross-country walk is considered to be the most difficult, the end of the breaking in period, as it were. And what a breaking-in period it was.

In the evening,we  went to the the Theatre By the Lake in Keswick  to see Noel Coward’s Hay Fever. The play was great, but exhaustion was definitely setting in by the second half, and I found myself struggling to stay awake on the ride back from Keswick, wondering what the next day would bring. 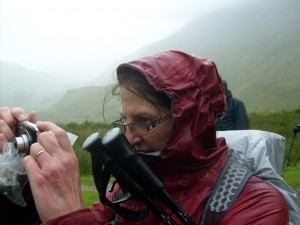 I’m writing this from Kirby Stephen at the end of day seven, 83 miles into the walk, and I will do my best to get another update to you within the next couple of days.

Oh, and Holly, well she’s holding up very well indeed on her Coast to Coast journey. Don’t forget to send your pictures of where you read your Holly to the Where’s Holly contest going on throughout the month of August to win fabulous prizes. Here’s the link.

Coast to Coast with Holly: Soggy Farewell to the Lake District → ← Rachel Leigh Gives an Explicitly English Story Behind the Story

2 Responses to “Coast to Coast with Holly: Let the Walk Begin”