Rachel Leigh Gives an Explicitly English Story Behind the Story

I’m happy to welcome Rachel Leigh to A Hopeful Romantic, and since she is speaking of things explicitly English, I’m already intrigued. Welcome Rachel!

When I was invited to appear on this blog, K D asked that some aspect of my post includes a ‘story behind the story’ aspect. So what is the story behind Explicitly English? I’m not sure you’ll actually believe me even if I tell you but here goes…

I am British, living in South West England which I have all my life so I know little else accept from an English way of life, English history and English customs. Apart from holidaying in the Mediterranean, a four-day trip to New York and camping in France, England is what I know best.

So because of that, I decided the heroes and heroines in my books would always be British because authentically, that is the best I could do for my characters – and my readers. So believe it or not, the story came from watching a very British and very popular TV adaptation of Agatha Christie’s Murder on the Orient Express. 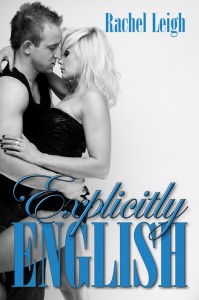 Laura Markham needs to forget – just for awhile.  Be someone else for change – live as her parents will never have the chance to.  And for Laura, that means leaving the City for the English countryside and doing just what the hell she feels like…wherever she feels like doing it…

British stockbroker, Stephen Cambridge knows by going home to his country retreat two days early, he’s likely to surprise his contracted interior designer.  And when he finds out she’s the woman who performed the solo masterbation show for him on the inward bound journey, Stephen will do anything to further convince her to miss the outward bound train and stay with him forever…

Hmm…quite far removed from the stereotypical British tweeds and Poirot twirling his famous moustache but inspiration is inspiration and we writers take it whenever and wherever it appears. I love what I do and hope to continue to write forever. One of my favorite things is attending my monthly Romantic Novelists Association (UK RWA equivalent) chapter meetings and listening to my fellow members nuggets of inspiration. Believe me, the ideas are out there, you just have to use a little imagination sometimes, lol!

Rachel loves to hear from writers and readers, find her here:

Thanks for sharing the Story Behind the Story with us Rachel! As a transplant to South England, no one will appreciate hot tales of the English countryside more than I, and this one definitely sounds hot!