Coast to Coast with Holly: Soggy Farewell to the Lake District

We have a good connection, so I’m taking the opportunity to send you the next two days of Holly’s Coast to Coast. There’ll be more to come. 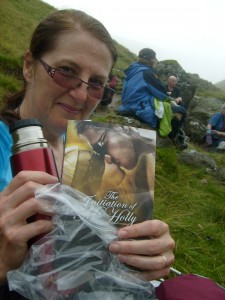 Don’t forget to send the photos of where you read your Holly to the Where’s Holly contest to win cool stuff. Here’s the link 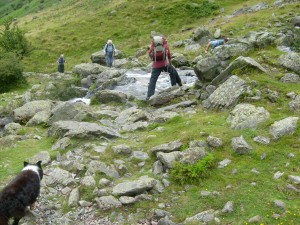 Bog walking was the order of the day. Today we walked the walk that we should have walked on day three, which was from Rosthwaite to Grassmere. We didn’t walk it yesterday because of the bad rains. We were afraid there would be swollen streams we’d not be able to cross. And as we finished off today, I’m very glad we made that decision. We had several streams to cross that were still quite swollen, even though we got minimal rain today. On top of that I can’t imagine walking the boggy descent we had today in the wind and rain we had yesterday. Having said that, the scenery was spectacular, as always, and the combination of streams and boggy descent made for a different kind of walking. 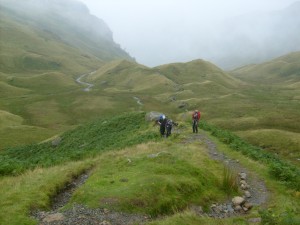 The first part of the day’s walk culminated in the ascent of Lining Crag via a rocky scramble that was more like scrambling up a vertical stream than a path. The second involved a long, boggy descent that was the cause of several falls during the course of the walk. Luckily no one was hurt. The descent into Far Easdale was rocky, muddy and boggy with several swollen streams to cross. By that time most of us were long past caring if our already wet feet got a little wetter, so we were a lot less careful to look for the crossing stones and just waded on through.

On a more personal note, everyone seems really tired 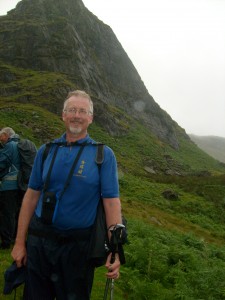 tonight. Raymond and I retired to our room early to do a little catching up with email and 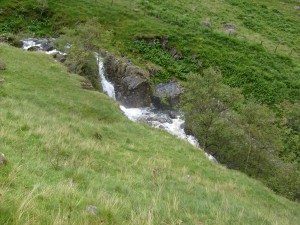 hopefully go to bed early. I’m tired. Today, at least the second part, seemed to me to be the hardest we’ve walked so far. Hopefully tomorrow I’ll wake up and be ready for another long day. Joints are holding up. So far I have no blisters, though Raymond has a couple from his new boots. He’s resorted to walking in the old reliables. My worst injury to date is stubbing my pinkie toe on the wheel of the suitcase when I got up in the middle of the night to look out the window at the rain. Can’t afford too many careless injuries to my feet when there are still almost 150 miles to go.

Today was the hardest day by far for me. I started out tired, stayed tired, got even more tired. We should have had a lovely walk from the village of Patterdale up over Kidsty Pike, the highest point on the Coast to Coast, then down along the whole length of Hawsewater to Burnbanks on the dam at the end of the lake. Instead, early in our ascent the rain started with the mist following shortly thereafter. We did get one last respite from the mist along the side of Angle Tarn, where we had our coffee. Angle Tarn looks like it belongs in a Japanese garden with its little islands in the middle and lovely wind sculpted trees. After we enjoyed the gardenesque view, the weather began in earnest. A cold south wind battered us most of the walk in driving rain. The mist became so thick that it was impossible to see the back of the group walking on the trail from the front. We had to be extremely careful to keep everyone in view. 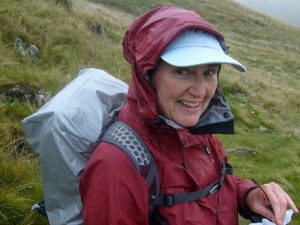 We lunched in the wind and rain near the top of Kidsty Pike, the highest point of the Coast to Coast, and I slurped back tea from the flask just to keep warm. It was lunch at speed, then the forced descent began down the back side to Haweswater.  Though Haweswater is a very beautiful lake, it is a little bit sad and eerie to me because I know that beneath the mirrored waters lie the ruined villages of Mardale and Measand, flooded out when the dam was built to provide water for Manchester. The stone fences that disappear into the water  along the shore are a solemn reminder of the cost. 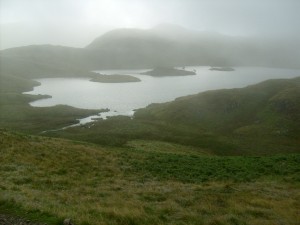 realized it until today. There are two K Ds that walk whenever I hit the trail. There’s the K D who laughs and jokes and delights in the lovely detail, in the jewelled droplets of water on the grass, the K D who takes everything in and walks the story. Then there’s the K D who is the drama queen, whinging and whining and making a mountain out of every molehill. She is miserable and surly and hates everything and everybody. She comes out when I’m really tired. Usually nobody else but poor, long-suffering Raymond sees her, but there’s no denying that today was her day in spades.

Even as I thought about the dichotomy while I walked, I didn’t seem to be able to do anything about it. All I could think about was how tired I was and how my knees hurt, and how I wanted to be warm and dry. There was no convincing myself that this too would pass. Of course it did, and the evening’s celebration with friends after our last walk together was a joyful reminiscing of our five day’s adventure. It wasn’t marred by what had gone on quietly inside of me all day while I walked. While everyone wished Raymond and I the best on our continued journey, I 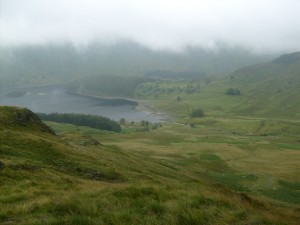 couldn’t keep from wondering if tomorrow would be as hard.  Tomorrow, and for the next nine days, we would be out on our own.

Tomorrow we leave the Lake District and strike out on our own across Eastern Cumbria and into the Yorkshire Dales and the 133 miles ahead of us before we reach the North Sea and Robin Hood’s Bay.

More to come from the Yorkshire Dales National Park!

Roxanne Rhoads Enthralls Us with The Story Behind Hex and the Single Witch → ← Coast to Coast with Holly: Let the Walk Begin
© 2022 K D Grace
Site created and maintained by Writer Marketing Services