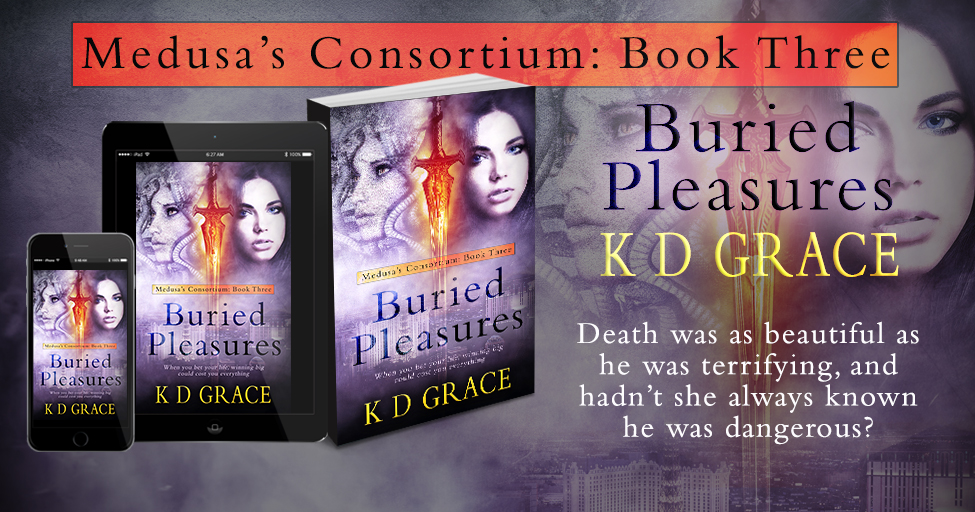 It’s launch day for Buried Pleasures, book three of Medusa’s Consortium. Buried Pleasures takes us away from the Big Apple and sets is smack dab in Sin City, or should I say underneath Sin City. Magda Gardener’s network is expansive and worldwide, and not all of the members of her consortium are monsters. Some of them come from seriously powerful families, and the head of the Las Vegas consortium is none other than the God of Death himself.

As I have mentioned before, while the events in Blindside are unfolding in NYC, Las Vegas is seeing some scary-assed action of its own. Same time, different city, same gorgon in charge. Today’s post and the next one will introduce you to the hero, the heroin and then the villain of this first novel in the Las Vegas timeline. When siren, Samantha Black, meets Death up close and personal, it’s not at all what she expected.

Enjoy the excerpt and follow the links to the book page and it’s buy links.

When Samantha Black shares her sandwich with a dog, his owner, Jon—a homeless man living in the Las Vegas storm tunnels—gives her a poker chip worth a fortune from the exclusive casino, Buried Pleasures. All Sam has to do is cash it in. Sam is in Vegas for one reason only—to get her friend, Evie Holt, away from sinister magician, Darian Fox, who holds her prisoner in an effort to force Sam to perform at his club, Illusions. A neon circus tent of strange and mystical acts, Illusions is one of the biggest draws in Vegas, and he’s hell-bent on including Sam in his disturbing plans.

The shadowy Magda Gardener will do anything to keep Sam from cashing in that chip. She knows that Buried Pleasures is the gate to Hades and cashing in the chip is a one-way ticket across the River Styx, which runs beneath the storm tunnels of Vegas. Jon is really Jack Graves, owner of Buried Pleasures, and Graves is really the god of death, himself, and if things aren’t already confusing enough, he and Magda know what Sam doesn’t. Sam is the last siren. That her song can kill is only the beginning of her story. Jon wants her safe on his side of the River, protected from Fox’s hideous magic. But even Death fears Magda Gardener, who is none other than Medusa, and the gorgon has her own agenda. If Sam is to understand her heritage and win the battle against Darian Fox, not only will she have to trust her heart to Death, but they’ll both have to work for the gorgon, whose connection with Sam runs deeper than any of them could imagine.

Buried Pleasures Excerpt: The Hero and the Heroine 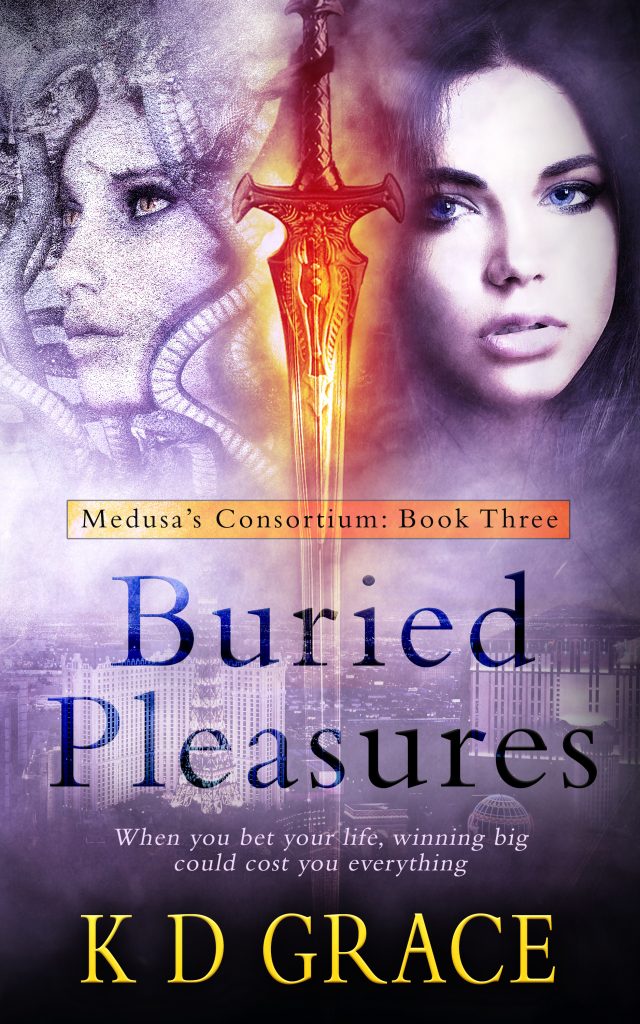 “I always heard that when you die, you’re supposed to go toward the light, not away from it,” Sam said as they entered the gloom of the storm tunnel. “Does this mean I’m going to the bad place?”

“You don’t believe in all that rubbish, do you?” the man asked in a soft voice.

“I don’t know. I guess I figured you die and that’s the end. You know, all your bits get broken down into smaller bits and you get recycled. I never really thought about it much. I wasn’t planning on dying any time soon, though.” But she was dead. There was no doubt. Had to be. She was looking down on her body from near the ceiling, and frankly, it wasn’t a pretty sight—lots of blood and trauma and stuff that would probably make her throw up if she wasn’t dead. But she followed along, feeling no pain and no stress, looking down on the dog and the man, as he carried her into the tunnel, beyond the light, beyond the outside world.

Though she was talking quite conversationally, her mouth wasn’t moving. She figured that was a sure symptom of being dead. She wasn’t moving at all actually. There was no heartbeat, no breath. She didn’t know how she knew that, but she did. Strange, but now that the initial anger, the initial shock, was over, she felt pretty indifferent about the whole thing.

Dead or not, the man heard her and replied. Perhaps he saw dead people, like that kid in the movie. “You don’t need to worry. This is just the storm tunnel,” he said. “You’re not going to a bad place. You’re going to a very good place, Samantha.”

“Well, that’s a relief,” she replied. “I mean, I don’t mind being recycled. I’ve never liked waste, but I’m not too keen on being tortured for eternity. I think that’s rather unfair, actually. I mean, I’m not that bad, am I?”

“I’d say your balance tips considerably toward the good side.”

She took note of a man in baggy shorts and a T-shirt. On the concrete walls, he was delicately painting a particularly rude, if rather well executed, enormous cock, complete with hairy balls. The artist in residence tipped his baseball cap and the headlamp strapped to it made the tunnel dance in light and shadow. “Jon, Gus. Delivering this one personally, are you?” He nodded to her body. “She must be pretty important.”

So, his name was Jon. At least now she knew what to call him. She tried to remember when she had told him her name. Surely she wouldn’t tell some stranger who she was without damn good reason, cool dog notwithstanding.

“Looks like she had the crap beat out of her,” the man observed.

That was not very polite, Sam thought. It was a bit like someone saying you look like shit without your makeup.

“You should see the other guys,” Jon replied.

“Good for her! If you’re gonna get beaten to death, might as well get in a few good licks on the way out, I say.”

“I broke my neck, actually,” she said matter of factly. “The rest is pretty superficial.”

The man looked her over, but didn’t respond.

“Nice work,” she called over her shoulder as they continued on down the tunnel. The guy’s comment was enough to get him back in her good graces. Sadly, she didn’t think he heard her. Then she turned her attention back to Jon. “I’m really glad to hear that. I mean, glad that I’m not going to the bad place. For a minute there I thought I’d have to stay in Vegas.”

The man chuckled and, in spite of the fact that she was very clearly floating above his head, she felt the rumble of his laughter against her cheek coming from deep in his chest like the comforting purr of a cat.

“Where are you taking me?” she asked.

“Good. I’ve been gone too long.” Then she added as an afterthought, “Are you an angel?”

“Hardly.” This time Jon laughed out loud and she felt the whoosh of his breath warm against her cheek, and the muscles of his belly tensed and relaxed against the body she was no longer in. “If you want to get technical, I suppose you could say the angels work for me.”

It was her turn to laugh. “You don’t look anything like I expected God to look, though I do love it that God has a dog.”

“Our perception of things often varies from their realities,” he said. “As for Gus, well I guess you could say he’s the angel. He doesn’t actually belong to me. We just work together.”

“An angel with a taste for peanut butter sandwiches. That’s nice.”

Gus offered a soft woof as though he understood every bit of the conversation. Of course, if he were an angel, he no doubt did.

“Oh, he’s not picky. The mutt’ll eat anything,” Jon said.

Sam recalled the ripping and tearing of flesh and the blood of her assailants outside, and she shivered.

The three fell into a comfortable silence, with the dog flanking Jon while she hovered above them. She didn’t know how long they walked. Time seemed a bit of a fuzzy concept. She supposed that had something to do with being dead. There was far more activity in the tunnel than she would have expected. She’d have figured Jon would want to keep a dead body secret if possible, but if the tunnels had a main street, he seemed to be walking right down the middle of it. And Sam had to admit, the place was fascinating. They moved through sections of the tunnel that could have passed as living rooms or kitchens in any above-ground house, other than the twilight gloom relieved only by camping lanterns, flashlights and candles—that and the furniture was set up on bricks and wooden pallets to keep it out of the endemic water. In some places it stood only in puddles, in other places it slicked the whole floor of the tunnel like a lake of glass that splashed and trickled beneath Jon’s heavy boots and reflected the strange world around them.

The smell of damp and mildew permeated the air and disappeared only as olfactory fatigue set in. Sam took note again that she could smell all the smells in spite of being dead, and a fair few of them she didn’t think she’d miss too much if she couldn’t.

There were spaces staked out along the walls with nothing more than a sleeping bag and a couple of black jumbo trashcan liners filled with belongings. There were paintings and family photos and banners for favorite football or baseball teams hung on the walls.

Above one rather Spartan space with an army cot and several plastic crates, a battered American flag hung upside down. Beaded curtains, pieces of plywood, even heavy rugs draped over strung rope, separated individual living areas.

Somewhere farther down the tunnel, the driving beat of hip hop echoed back on itself. Closer to them, Sam could make out the soft buzz and twitter of conversation among the residents. There were knickknacks and books tucked away in stacked plastic milk crates and on shelves of cinderblock and ply board.

One very attractive blond in a red satin dress perched in front of a vanity mirror, putting on makeup in the light of a Coalman lantern. She eyed Jon hungrily. He ignored her, but Gus growled a soft warning as they moved on. They passed a couple lounging on a bed that looked like it might have come straight from a hotel suite—right down to the wood-framed mirror above the headboard. They shared a bucket of KFC and passed a two-liter bottle of Diet Coke back and forth. Calling out greetings to Jon, they offered Gus an unidentifiable chunk of chicken, which he downed in a single gulp with a quick sweep of his tail in thanks.

Sam tried to imagine the place, which almost had the feel of an underground neighborhood, all washing away in heavy rains. Again and again. She knew it did periodically, but it all seemed so permanent at the moment.

As they moved away from Main Street and deeper into the unoccupied areas of the tunnels, she realized that she saw just fine even in the thick darkness. She supposed that was just a part of being dead. As far as she could tell, Jon carried no source of light. But then God would hardly need it, would he?