Right now there’s a link going around on Facebook to another such list. But this list contains the titles of ‘books you’ll never brag about having read.’ Some of them are just mindless guilty pleasures and smutty bonk busters. Some of them are infamous for being poorly written, but making their authors a mint. What writer isn’t a little green around the gills where those books are concerned? Some of them were the trend of the day — all the rage one week, forgotten the next. Some of them were written by people who were once admired, but have now fallen from grace. Some of them are rubber-necking books – you know the type – literary train wrecks and gossip fests just too juicy to resist. Some of them had me scratching my head and wondering why they were even on this list at all – especially when I could think of a few of my own I’d have added if I’d been making up the list.

But the lovely refreshing surprise that really got me thinking about what we read and why, was that most of the people who responded to my sharing this link on Facebook were unabashedly unashamed of reading their share of the books on this list. It’s reading, rights? These very smart people realise that. Whether it’s a bonk bust or a train wreck, the power of the written word is totally awesome! It’s an eye on the world that’s nothing less than magical.

The world we experience in the rarified air of what’s considered great literature is no more the real world than the one we get when we read fluff ‘n’ stuff. Reading isn’t now, nor has it ever been a reality check. If anything it’s the ultimate escape, the voyeur’s view into how the other half lives, the opportunity to be entertained, titillated and even occasionally transformed. Being educated and well read is a thing we all treasure, and rightly so. But the experience of the written word is as much about pop culture and gossip and trends and history unfolding in all it’s marred, messed-up glory as it is about being educated. In fact, it seems to me that there is a point of cross-over that we can’t really afford to miss if for no other reason than because it’s a part of our culture, a part of the world we live in — bonk busts,
bunny fluff, woo-woo and all. Besides, we need the escape, we need the view from outside ourselves. Guilty pleasures
are often the best, and they’re never better than when we feel we should be reading Dickens, but end up reading Dan 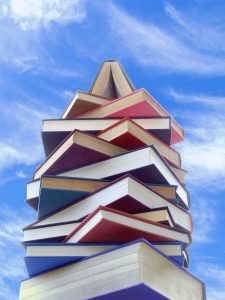 Brown over a pint of chocolate ice cream consumed straight out of the container.

Don’t get me wrong, some of my best, most life-changing reads have been classics, and they were wonderful and transforming, and I see them as mile-markers in my life. But I have my own list of fluff, woo-woo and mindless pulp
novels, my own dirty little secret reading list, and I’m fine with that. Those books make me feel good when nothing else will. The fact that I can read, that I do read, that everything is out there for me to read; the fact that the written-word, no matter how shallow or forgettable is still the written word, well that’s nothing short of wonderful. At the end of the day, reading is an activity worthy of respect in its own right. The fact that we DO read is of far greater value than the purity of what’s on our checklist.