Body Temperature is Going Up & Down!

(And don’t forget, the 9th episode of Demon Interrupted will be out on the 19th of July. FREE on this blog) 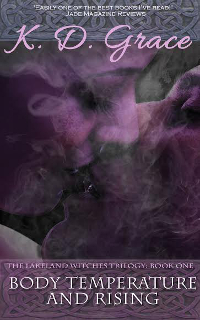 Tim was in the stable with the mare when she arrived. She could see his broad back through the open door. A sudden eruption of butterflies in her stomach made her skittish like the mare had been, was it only yesterday morning? It made her not want to face him, not just yet. As she watched him moving about the stable, heard him talking softly to the horse, the ache she felt was a very human one, one that sprang from being alive and not wanting to be alone and all the other things that living entailed. It was not the fiery burn that accompanied the presence of spirits. It felt cleaner somehow, more sane. But on some deeper level, it felt at least as frightening, so she swallowed hard and turned quietly toward her cottage.

She saw his face darken, and in her own mind’s eye, she saw the woman’s tragic death, and for a split second she wished she hadn’t said anything, but damn it, he was such a bastard. ‘First you treat me like I don’t exist, then you go all big brother on me like I’m too delicate and soft-brained to take care of myself. Well I have news for you, Tim Meriwether, I was taking care of myself for a

long time before you decided I needed looking after.’ She shoved again, and this time he grabbed her with such force that she felt the bones in her neck pop.