For those of you who haven’t been over to Coffee Time Romance yet, you still have time. I’ve been over there this whole month talking about Body Temperature and Rising, and all things paranormal and sexy. Stop by, read the sexy excerpts, join in the fun and if you leave a comment, you could win an eBook version of The Initiation of Ms Holly or The Pet Shop. Winner’s choice. 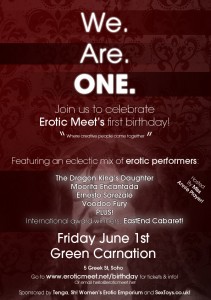 Back for more of the naughtiest sexiest readings in London, I’ll be reading with the fabulous Filthy Mouths and Evil Tongues Ladies at Sh! Hoxton on Friday the 15th of June. The fun starts at 6:30 with drinkie-winks, then it’s rude reads all the way, with breaks to browse the fabulous Sh! stock of yumminess. On the naughtiness agenda: The Dragon King’s Daughter, Elizabeth N. Spire, Meg Philip, Mel Jones and yours truly.  A filthy time will be had by all! 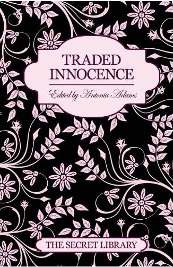 ‘It’s the road trip from hell! I knew it would be. I just knew it!’ Val didn’t bother to

speak quietly. After what she’d been through, no one could possibly blame her for losing it and talking to herself. And this was just the beginning! How the hell was she going to survive this little misadventure all the way to Oregon? She glanced quickly over her shoulder as she stepped behind the bathrooms at the rest area, trying desperately to block out the memory of Aunt Rose accusing the elderly gentleman at the vending machine of stealing her change.

She needed to vent or she’d explode. Once behind the building she turned her face to

the wall and banged her head against it. ‘Why me? I’m not a bad person. I never murdered anyone, I always recycle, I volunteer for the autumn fucking bird count. Why, ‘she banged her head for emphasis.’ the hell’ bang bang bang. ‘Me?’ Bang, bang.

‘Sh!’ A man in a faded blue t-shirt and jeans that were even more faded raised a finger to his lips’ It was impossible not to notice that the other hand was occupied, wrapped around the big stiffy that looked as though it had parted his fly like Moses parting the Red Sea, and my, what a staff!

When he was sure he had her full attention, as if there was any doubt of that, he spoke. ‘Quiet.’ He glanced around quickly. ‘If word gets out,’ he nodded to his stretching cock, ‘everyone’ll be back here getting a little relief from the road. Though In your case,’ he leaned closer and she could see startling blue eyes peeking over the mirrored shades that slid down his sun-freckled nose, ‘ I reckon you need it more than most.’

Without missing a beat, he gave her an appreciative nod. ‘There now. That’s better, isn’t it? You wet?’

‘No surprise really. Anger and frustration can often be a turn-on. Well not a turn-on per-se, but the body compensates for the stress in the best way it knows to make itself feel better.’ He shrugged. ‘Plus watching someone else handle their junk usually will do it the trick too.’

‘Sh!’ she hissed. ‘Don’t talk, just touch it, and let me watch, and relieve my stress.’

He did as she asked, easing his jeans down enough that she could see the lovely straight lines of his hips perfectly balanced by the muscular swell of his ass-cheeks, which clenched and relaxed with each thrust. ‘What else,’ he grunted.

‘What else do you want to see? Not that I’m an exhibitionist or anything,’ his breath accelerated noticeably, ‘but I’m sympathetic to your circumstances, and right now this is so working for me.’

It wasn’t doing too badly for her either, as she slipped two fingers in between her swell and began to scissor them while her thumb went to work on her clit. ‘Turn around a little,’ she breathed. ‘I want to see your ass.’

He did as she asked, half bending over to give her an exquisite view, and she felt herself gush, as he spread his ass-cheeks. ‘Oh my!’ she gasped.

‘You like that, do you? You wanna see my back hole?’

‘And you’d like me to finger it while I wank, wouldn’t you?’ He didn’t wait for her answer. And he really didn’t need to. Almost as though he knew what was going on in her panties, he stuck a thick middle finger into his mouth and sucked it until it was wet and shiny with his saliva. For a moment, she found what he was doing to his finger with his yummy mouth almost as hot as what he was doing to his cock. Through all of his efforts, his eyes, peeking over the mirrored sun shades, never left hers.

Watching her over his shoulder, making sure he was at just the right angle for her to see what was going on in front and behind, he bent over still further and spread his legs so that the twitch of his asshole was centre stage. With a tight breath released between his teeth, almost like he’d touched something hot, he eased his finger in to his back grip. ‘Ah, that’s nice,’ he breathed. ‘Such a tight fit, and my asshole’s so sensitive.’ Then he shoved it all the way in. His eyelids fluttered, his ass cheeks clenched and he positively growled and bucked against himself, tugging at his penis as though it were in serious need of subjugation.

Her panties were beyond wet, and she now gave herself the whole hand hump, four fingers shoving and wriggling inside her wet snatch while her palm exerted exquisite, almost painful pressure against her mons, which put the squeeze on her burgeoning clit. She shoved the other hand inside her blouse and maneuvered her left breast free from her bra, at least free enough that she could knead it while pinching and stroking the nipple until it was tight and engorged and raw.

‘I want to see you come.’ Her voice was a harsh whisper, and she felt the blush crawl up her face that she would even ask such a thing. And yet, her pussy clenched against her fingers at the thought, and her clit surged. ‘I know you’re close. You look like you’re about to burst, so go ahead. I want to see you unload on the ground like the nasty man that you are. I want to watch you spurt.’ Jesus, what was the matter with her, talking like some street whore, but even as she spoke, she felt wet slippery approval from her cunt.

‘Your wish is my command,’ he grunted. Three hard jerks balanced by the finger digging at his asshole, and he shot thick white streamers of semen across the well-manicured grass.