Wow, it’s not even Christmas yet and Easter candy is already for sale at Kroger and Safeway! The Chia pets are barely warming the shelves and they’re already stocking up the chocolate bunnies! I remember when the only time you could get rubber bunnies was the week or two before Easter and at 75% off the couple of days after Easter. I call marshmallow peeps “rubber bunnies”. No explanation necessary. Now, you can get rubber pumpkins and ghosts for Halloween and rubber Christmas-themed candies. That’s just wrong! I even found chocolate mousse-flavored and colored rubber black cats for Halloween.

Christmas is the time for homemade candy canes. Colorful hard candy ribbons. Chocolate advent calendars. Brachs candies, Ferro Rocher chocolates and boxes of Godiva morsels. Wassail, spiked cider, and hot buttered rum. Cookies take over my house. Pfeffernusse. Anise pizzelles. Sugar cookies with red and green sugar on them. Gingerbread men. Gingerbread houses. Nuts are popular too. So are Harry and David’s fruit baskets. Whether you want one or not.

It’s also the time of year for another tasty dish.

When I was a kid my mother used to cart me and my sister around to her friend’s houses. I was bored out of my skull so I’d scarf down all the Christmas cookies and cakes everyone had out on their tables. When I was ten we were at another one of my mother’s friends and I had already started on the ginger snaps. I found what looked like chocolate and confectioner’s sugar donut holes and I ate about twenty of them within two minutes.

Then I began to feel sick. Dizzy too.

I told my mother I wasn’t feeling well and I wanted to go home. I told her the donut holes made me sick. Her friend, shocked at what she realized I had done, asked me how many I had eaten. I said about twenty.

Here I was, ten years old, and I was already a lush for Christmas. I must admit once I calmed down the dizziness and giddiness felt rather good. LOL

So here is a recipe for that holiday classic, rum balls. Just don’t let a ten year old mistake them for donut holes. Hilarity will ensue.

Into a large bowl, sift together 1 cup of the confectioners’ sugar, the cocoa powder and allspice. Stir in the rum and corn syrup. Stir in the vanilla wafers and walnuts, and mix well. Place in the refrigerator to firm up slightly, about 30 minutes. (The mixture may appear crumbly and dry; this is O.K.)

Place the remaining 1/2 cup confectioners’ sugar in a shallow bowl or dish.

Using a tablespoon, scoop out portions of the chocolate mixture and press into 1-inch balls. Using your hands, roll the balls in the confectioners’ sugar, coating evenly.

Place on a baking sheet, cover with plastic wrap and refrigerate overnight. Store in an airtight container in the refrigerator for up to 2 weeks, placing waxed paper between the layers to prevent sticking. 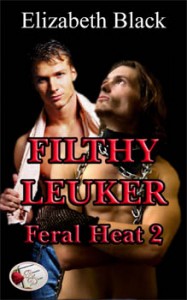 Have you read my novella Feral Heat, which is about the lives and antics of Sam Hightower and Grant Newsome, two bisexual werewolves? Those two work as lighting technicians for stage plays. That book has always been my best seller. Since many people have written to me telling me how much they like Sam and Grant I’ve decided to write more stories that include those two characters. The first story appears in the book Explicit Encounters published by Romance Divine. It’s called Fluff the Master, and it’s a FREE READ! Yes, you read that right. FREE! So pick up your copy today. You may find it at AllRomanceeBooks. You may also e-mail me at trishcwilson AT comcast DOT net and I will give you a PDF copy of the book.

Here’s my Feral Heat page on my web site. It has everything you need: buy links, excerpt, blurb, reviews, and cover.

The second story is called Filthy Leuker, and it released yesterday. Look for it at AllRomanceEbooks, Barnes and Noble Nook, Amazon Kindle, Kobo, and other locations. Filthy Leuker continues the story of Sam Hightower and Grant Newsome, my bisexual werewolves from my novella Feral Heat. You may also find Sam and Grant in the free read Fluff the Master, published by Romance Divine in its Explicit Encounters anthology.

Here are a blurb and an excerpt from Filthy Leuker to whet your appetite. Treat yourself to some fantastic Christmas gifts by getting Feral Heat, Fluff the Master, and Filthy Leuker at the same time!

“I don’t think we’ll be getting much rest tonight. I’m feeling adventurous!” Charlotte dipped her finger in her Tuaca and rubbed it around her mouth, pursing her lips with the promise of much more. She pulled a pair of dice out of her back pocket of her jeans and rolled them in her palm. “What do you say we play with my Sex Dice?”

“What are Sex Dice?” Luke looked so open and naïve Sam wanted to hug him.

“He’s adorable,” Charlotte brushed her fingers against Luke’s arm, making Luke double-take at her bold gesture. A pang of jealousy washed over Sam, but he immediately shoved the feeling away. They’d share each other’s bodies soon enough. Charlotte continued: “Sex Dice are a game. We shake the dice and do whatever they tell us to do. One die says what to do and the other die says to whom to do it.”

Luke reached for the dice in Charlotte’s hand but Lina slapped him away. She likes slapping. I could get into a little swat. The pain would do me good.

“No!” Lina commanded. “I’d rather see your reaction the moment you have to remove your shirt or French kiss the person to your right.”

“Good thing we’re bi or that could be awkward.” Mirth filled Grant’s voice.

“Or enticing,” Charlotte nibbled brie from an apple slice. Melting cheese dripped from the corner of her mouth, and the tip of her tongue snatched it up before it could get away, making Sam’s cock twitched with delight. “Have you ever seen two straight women kiss? It’s very exciting. All the giggling and petting. They love it. They just don’t admit it.”

“Enough talk! Let’s play. Everyone on the floor in a circle.” Sam took the dice from Charlotte as the five of them sat on the floor with Sam against the couch and to his right Grant, then Lina, Luke, and Charlotte.

“I’ll go first,” He took a long swallow of his Tuaca and tossed the dice on the rug.

Where To Find Elizabeth On The Web:

8 Responses to “Bah! Humbug! It’s Too Early For Easter Candy!”