Anything for Him: A Petite Novel by Lily Harlem & Natalie Dae

I’m very excited to have a sexy excerpt of the latest offering from the sizzling pens of two of my favourite erotica writers, Lily Harlem and Natalie Dae. Their petite novel, Anything for Him, is now available from Mischief Books. A read too sexy to miss! 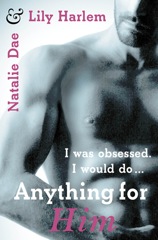 Just how far will one woman go to fulfill her fantasies?

I prefer to chase the news, not be the news. But when the delectable Liuz, with his uncannily accurate perception of my secret desires weaved its way into my life, it wasn’t long before I was in way too deep, submerged and intoxicated with a passion I was afraid was more than I could handle.

Or was it? Because although my heart was overwhelmed with feelings I had no resistance against, and while my deceitful body was consumed by a burning passion, I still had a plan. A plan I prayed would keep me afloat as I was pushed to the very edge of my limits, while the journey got tougher than even my wildest flights of fantasy could have imagined. I claimed him and I felt that he was rightfully mine. My heart simply couldn’t beat without a permanent connection between our hearts, minds and bodies. Losing was not an option,not when my sanity depended on winning him.

Because I would, quite literally, do anything for him.

A small smile dallied on his lips before he compressed them, obliterating the tiny glimpse I’d gained into his feelings. He’d looked tender just then, smitten – or was that just my high hopes? – and it made me want to reach up and stroke his cheek. Cup it to let him know I felt the same. But I didn’t, too afraid that if I moved, the spell would be broken and I’d be banished to darkness once more.

So I watched him watching me, smiled myself at the tiny crinkles beside his eyes. Were they from age or laughter? I wanted to see him laugh, a real belly laugh, to giggle with me on lazy Sunday mornings.

That would never happen.

I was just being fanciful, allowing the softer side of me to come to the fore and, inwardly, I cursed myself for it. I needed to stay on the track our journey had begun on, with Liuz my master and me the willing follower. If I tried to manipulate things, who knew what would happen? I had a good idea. He’d say the stop word, and my world would be shattered. Damn, I’d become attached and shouldn’t have. No, I needed to scour these new feelings away, wash any remnants down the drain, because if I didn’t, it would be over faster.

Over. I never want it to be over.

Him reaching out his hand for mine, twining his fingers with mine, brought me up short. Another show of tenderness I hadn’t expected, bringing my previous thoughts and hopes rushing back.

Stop it. He was just doing that to waste time between fucks. It didn’t mean anything. Not a damn thing.

‘You have tiny hands,’ he said, gaze glued to our knot of fingers. ‘So tiny.’

Shit, his words melted me into a pool of goo. I wanted to see what he saw, to see through his eyes, but his face was telling me so much more. That little smile was back, the dimple in his cheek, and his eyes had taken on a dreamy look that I would swear expressed similar thoughts to mine.

Was he feeling something for me? Something more than seeing me as a woman he could use? I couldn’t hope. Just couldn’t.

To stop myself falling even more madly in love with him – or more obsessed – I dragged my sights from his face and stared at our hands. I shouldn’t have done that. What I saw were hands that belonged together, his large palm pressed against my smaller one, the tips of my slim fingers barely peeking from between his thick, longer digits. My stomach rolled with the realisation that I had allowed myself to go too far when I’d removed the blindfold. I’d encouraged intimacy, ousted the security blindness had given me, and I knew I was in all kinds of trouble now.

‘Do you think,’ he said, still studying our hands, ‘you could have another man after me?’

Oh, I knew where this was going, why he’d asked that question. Beefcake. I tensed, hoping he’d think it was a natural reaction to his query and not that I knew what was going to happen at some point tonight. I swallowed, hoping my voice came out strong when I replied. Should I give the true answer burning my tongue? The one where I was honest and said that no man would ever match up to him? No man would ever make me feel as sexy, as dirty, and as needed as he did? Or should I shrug it off, behave as I was supposed to and give him a hell yeah?

I decided to hedge my bets, play it safe. ‘Um, in what context?’

‘It’s simple. Just like I said. Could you have another man after me?’

After me. He meant tonight, me having another man straight after he’d been inside me. I could, would do that for him.

‘Well,’ I said, dredging courage up from the shadowy little corner it had retreated to when I’d taken the blindfold off. ‘You’ve made it clear we’re not going anywhere. You let me know we’re just fuck buddies, so I haven’t got attached.’ Liar. ‘So when you say the stop word, yes, I’d fuck someone else.’ Eventually. When I picked up the pieces of my heart and glued them back together.

Oh, hell. I’d really gone and fallen for him, hadn’t I?

I’d said what he might want to hear, but at the same time I’d made it clear that when he said the stop word, I’d become attached to someone else. I’d effectively told him I belonged to him and him alone until he ended what we had. Those were my true thoughts, but I knew without doubt that in order for him to keep his knees intact, to have unbroken arms and legs – or worse – I’d give myself to Beefcake.

If Liuz picked up on what I’d actually said, would he send Beefcake away? He couldn’t. He had no alternative but to pay the man one way or another.

If only I had the money to give him.

He sighed. ‘But imagine if I did not want to say the stop word yet.’

Yet. He was going to end it at some point. Oh, God, Hannah, you stupid, stupid woman. What have you got yourself into here?

‘Maybe I want to share you with someone,’ he continued, stroking his thumb over my inner wrist.

‘I’m not sure what you mean.’ I must have sounded dense, but I needed to stall him so I could think on what he’d just said. He was putting it in a nice way, making out he wanted to share me. So he wasn’t going to admit that I was payment, that I was a nothing who didn’t deserve being made privy to what he’d planned. I understood why he couldn’t say. I mean, how rude would that sound? You see, Aniolku,it’s like this. I owe a dangerous man some money … But on the other hand, he was asking my opinion. He cared enough to find out whether I could handle this instead of just assuming I would.

That had to count for something, didn’t it?

Whatever it counted for, I grabbed hold of it and hugged it to me.

‘What I mean is, I need to share you with someone. Maybe one time, maybe two.’

Need. He hadn’t said he wanted to.

‘What brought this on?’ I asked, looking into his eyes. Every nerve in my body seemed to be screaming, making me tense, my mind full of questions I had no time to answer.

‘I have …’ He stopped, unhooked his hand from mine and lifted his arm to cup my cheek. His eyes flicked left to right, left to right, showing me he was unsure of how to word things.

Those actions had my emotions soaring. He cared. He bloody cared!

I warded off a huge smile, saying instead, ‘You have what?’

His hand burned my cheek, and his thumb tip brushing the soft skin beside my eye almost – almost – had me crying. I was on dangerous ground in more ways than one here.

‘I have a problem I need your help with, Aniolku.’

I laughed, reverting back to my original role, of who he thought I really was. ‘You need help from me? Now, that isn’t the man I know. You’ve given me the impression you don’t need help from anyone.’

‘I do not usually need help, but tonight I do. Something went wrong.’

‘Something went wrong?’ I purposely made my voice light, acted as though I had no idea what the hell he was talking about. ‘With what? And what’s another man fucking me got to do with it?’

He had two options. He’d either confess or make some bullshit story up.

Please let it be a confession.

He sighed again, moved his hand from my cheek to cup the ball of my shoulder.

Stroked languidly, circling my skin as though the action calmed him. Or maybe he was doing it to pacify me, to butter me up?

‘I – I promised you to someone else,’ he said bluntly, the words in his usual brittle, no-nonsense form but his eyes giving him away. He stared at my forehead, took his hand from my shoulder to fiddle with my tufty hair.

‘You did?’ I said, going for the incredulous tone.

2 Responses to “Anything for Him: A Petite Novel by Lily Harlem & Natalie Dae”