A View from Above

May 19, 2013   Tags: inspiration, International Space Station, Lakeland Heatwave Trilogy, The Lake District, writing
Category: Blog, Inspiration   Comments Off on A View from Above

Back before I started work on the Lakeland Heatwave Trilogy, back when I thought there was only going to be one novel, I struggled hard to move forward and couldn’t figure why it wasn’t working. And then I got a glimpse, just a little glimpse, but enough, of the whole picture, and I understood that the story I was trying to tell was a trilogy and not a one-off. The story I needed to write, was way too big for one novel.

I was reminded again how important that view of the overall picture can be when my good friend, Melanie Frazier, sent me a link to a breath-taking photo of the Lake District taken from the International Space Station, and I was deeply moved by such a view of a place I love, of a place that inspired and figured strongly, into each of the three Lakeland Heatwave novels, almost as if it were another character in its own right. 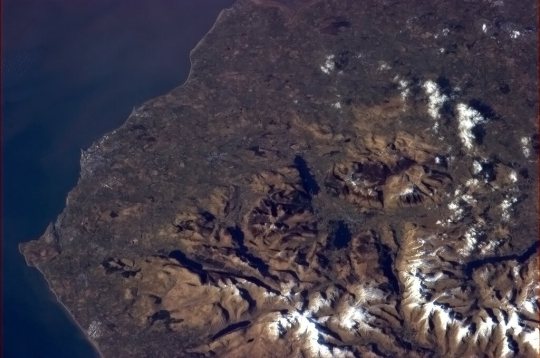 The photo was tweeted by Canadian astronaut, Chris Hadfield from on board the International Space Station. Commander Hadfield is a flight engineer currently on Expedition 34 on the station and has gained popularity on Twitter by sharing stunning photos of space and his views of Earth as the International Space Station orbits roughly 200 miles above the planet, moving at over 17,000 miles per hour.

How could such a ‘snapshot’ of one of my very favourite places not get me thinking about writers and the way we view our stories. I’ve always been an advocate of what I like to call snapshot writing. Snapshot writing is giving the reader snippets of detail, of experience, of a fleshed-out moment so full, so rich that the reader can feel it, taste it, revel in it. A snapshot can say so much about an event, often way more than words can. So for me one of the most powerful tools in my writing tool box is to create a snapshot with words, to write a moment so vividly that readers are instantly transported to the place and time. Commander Hadfield’s amazing snapshot from space has done just that for me.

Imagine my delight when I realised that I could not only see the whole of the Lakeland Heatwave trilogy in that snapshot, but I could see all the snapshots, all the intricately woven stories of my own adventures on the fells, of my own explorations and uncoverings of Lakeland one footstep at a time. 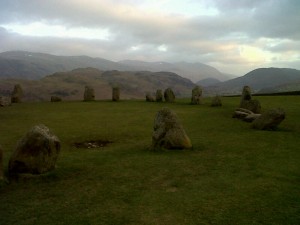 How could I not wonder what Alfred Wainwright would have thought if he could see his beloved Lakeland in such a view from above? His incredibly detailed drawings and descriptions of the Lakeland Fells are among the most accurate, most lovely, most poetic ever recorded. I can’t count the number of times I’ve sat in the Twa Dogs Inn in Keswick, the night before climbing a fell I’d never walked before, drinking Cumberland Ale while reading through Wainwright’s notes and studying the maps and drawings from his Pictorial Guides of the Lakeland Fells. The beauty in the minute detail of his work is now reflected in a stunning overview from space. How could anyone not be moved by that?

More than just the love of Lakeland, which I could go on and on about, and frequently do, is the sense of place such a snapshot from space gives. (I’ve added links with lots of pictures to show you the up-close-and personal of what you can see from a distance from the ISS photo. Enjoy!) I can look at that shot and see Ullswater and Derwent Water. I can see snow-capped Helvellyn and Skafell Pike, the highest peak in England. I can see the Borrowdale Valley, the Newlands Horseshoe, Honister Pass – all the places my characters in the Lakeland trilogy frequent – all the places I’ve frequented, and I couldn’t not share it. So if you look closely at the picture, the highest snow-covered point in the lower right — that’s Helvellyn. Its iconic Striding Edge put me to the test in one of the most adrenaline-laced, exquisite walks I’ve ever done in the Lake District.

And if you look to the left and slightly lower, at the last snow-covered range in the picture, that high point is Scafell Pike, the highest point in England and another walk I’m proud to say I’ve had the pleasure of doing.

But now, if you look in between those two ranges and slightly north, settled, almost centred, in between the two is a dark spot, roughly oval in shape with jagged edges. That’s Derwent Water with Keswick on the northeast shore invisible to the naked eye from so far above. To the south of the lake, where the fells begin again, is the Borrowdale Valley. And slightly to the left, you can just make out the irregular U-shape of the Newland’s Horseshoe, all of the above frequented by my characters in the Lakeland trilogy, frequented by me. The Newland’s Horseshoe is the place where both Marie Warren and I first ‘got lost’ in the mist. The Borrowdale Valley and the Newlands Horseshoe are the places that inspired the trilogy, the places where heather clings to steep cliffs, where deserted slate quarries make for slippery descents, where the views are breath-taking and where it can all disappear into the mist in a heartbeat. 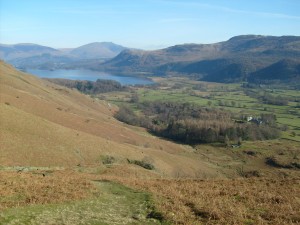 I’m so glad it was clear the day Commander Hadfield took this picture. I can’t stop looking at it. I love the fact that I’m somehow connected to that place and all the stories it evokes – not just mine, but everyone else’s – all those poets and walkers and writers and photographers and artists – past, present and yet to come — who have found Lakeland as powerful and as moving as I have. I’m connected to all of them, and by that connection, to all of those who read the writings and look at the works of art inspired by that tiny, rugged piece of land that’s just as exquisite when seen from 200 miles above as it is when explored slowly, painstakingly, one footstep at a time.

Surely there is no other place in this whole world quite like Lakeland … no other so exquisitely lovely, no other so charming, no other that calls so insistently across a gulf of distance. All who truly love Lakeland are exiles when they are away from it.