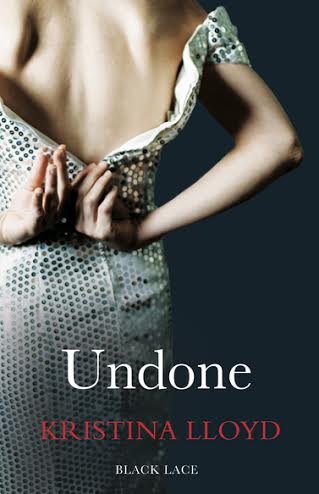 I’m very excited to help Kristina Lloyd celebrate the release of her sizzling new novel, Undone. She’s invited me to the gala celebration. Along with lots of fab authors and lots of naughty, inebriating cocktails and excerpts there’ll be plenty of yummy giveaways as well!

AND the fun will continue through the entire month of September with Kristina’s fabulous Undone Blog Tour. If you want to follow her on that tour (and she will be stopping by here! ) Here’s where you’ll find her.  The Undone Blog Tour.

Belly up to the bar and join the fun because it’s my turn to serve up the cocktails at Kristina Lloyd’s Kinky Cocktail Party, by naming my poison, so get ready for fizz and get ready for a bit of Latin dancing while I serve up Champagne Ritas along with an intoxicating dose of The Initiation of Ms Holly!

If you’re still standing when the drinking and the dancing are over, comment with your favourite cocktail for a chance to win a copy of my novella, Surrogates. Bottoms up!

Pour the tequila and triple sec into a cocktail shaker half-filled with ice cubes. Shake well. Strain into a champagne flute. Add limeade and champagne, stir briefly, and serve.

You can join the party and sample other kinky cocktails, more filthy excerpts and more fun by going here – http://kristinalloyd.wordpress.com/2014/08/29/undone-blog-tour-launch-kinky-cocktails-and-digital-drinking/

Blurb from The Initiation of Ms Holly 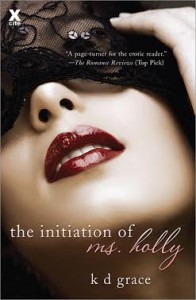 Excerpt from The Initiation of Ms Holly:

Edward’s hand slipped underneath the spaghetti straps to cup her breast and stroke her engorged areola. ‘Expensive dress?’

‘What?’ Intimidation knotted her stomach. ‘Does it matter?’

‘Not really.’ She could hear him filling the champagne flute. ‘I’ll buy you a new one.’ He lifted the glass to her lips. Just as the taste hit her tongue he pulled it away and she felt a cold wet splash over her left breast. She stifled a yelp, but not before his lips clamped down tight on her drenched nipple, and the friction of tongue and teeth on wet silk caused delicious shock waves down her belly all the way to her cunt.

‘You know,’ he said between sucklings, ‘at the command of Louis 15th, the original champagne glass was said to have been shaped like the breasts of his mistress, Madame Pompadour. I can understand why. Once you’ve suckled champagne from a beautiful breast, champagne alone, no matter how expensive, isn’t nearly as nice.’

Another cold splash across both breasts and down her cleavage. She gasped and held him to her as he shoved down the spaghetti straps and freed her into his hungry mouth. ‘What if people are watching?’ she whispered.

Another drizzle of fizz, but this time over her belly, dripping down icily against her mound. She squirmed and ground her hips against the seat.

‘Open your legs for me,’ he whispered. ‘There’s one cup even more perfect than Louis’s design.’

She did as he asked, wriggling and lifting her butt, her pussy clenching in anticipation. In one fluid motion, he shoved the dress up over her hips and pulled her panties down and off over her shoes. She wasn’t sure how he had managed it, but he manoeuvred himself onto the floor beneath the table. Before she could figure it out, cold liquid bubbles tickled her clit and dribbled down between her labia chased by the white hot lavishings of his tongue.

She moaned and everything inside her tensed with the surprise of it, the tantalizing, bracing shock of it, just before everything went molten and she slid down in the booth until her bottom was practically off the seat.

His hands kneaded her buttocks, thumbs spreading her folds open to the explorations of his mouth. ‘The perfect cocktail,’ he spoke against her pussy. ‘Champagne and lady juices.’

The music changed to a Latin beat, and behind her blindfolded eyes, bright flashes of colour burst and exploded like fireworks as she rocked and thrust, concentrating only on his mouth and her pussy and the sweet tart scent of champagne bubbling against her slit. She was so focused that she nearly slid off the seat when he pulled away, and she heard scrambling under the table.

The voice near her ear at the side of the booth startled her and she jumped. It wasn’t Edward’s!

‘I love Latin dancing, don’t you?’

There was the familiar whisper in her other ear. ‘Go with Alex, Rita. Trust me, now’s a very good time.’

Before she could protest further, she was half dragged, half tangoed on to the floor. ‘How can I dance,’ she panted, ‘when I can’t even see?’

There was a humid chuckle close to her nape. ‘What? You don’t trust me to lead you?’

‘Not when my brain’s in my knickers.’ She struggled to catch her breath.

‘You’re not wearing any.’ The words were pressed to her ear in a warm kiss, followed by a sigh of resignation. ‘Oh all right.’ He pulled off the blindfold, and she found herself squinting at a lovely face in a halo of blond curls. A well- muscled man with a dancer’s body pulled her into an intimate tango. She was so close that she could feel the bulge in his trousers and wondered how the hell he could still move so gracefully. Heat flared with the driving pulse of the percussion, and his groin rubbed deliciously against her mound with each shifting beat of the music.

Without warning, he lowered her into a heart-pounding dip, and she yelped out loud, causing several dancers to glance in their direction. As he pulled her back to him, she spoke between clenched teeth. ‘Is this some kind of a joke, Edward gets me all excited then hands me over to someone else? That is if I was with Edward at all. How the hell would I know?’

‘Shshshs.’ Alex covered her mouth with a kiss. ‘Relax. Of course you were with Edward, still are. I’m his gift to you. When you’re done with me, I’ll take you back to him.’

‘When I’m done with you? What’s that suppose to 16

mean?’ She shot a glance into the darkness at the edge of the dance floor, but to no avail. She was blindfolded when Alex led her from the table. She had no idea where Edward was. 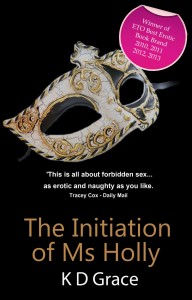 Once more he lowered her into a dip, this time pulling her up slowly, lingering to kiss the mounds of her breasts, nipples chilled stiff and clearly visible through the champagne soak fabric. Her pussy clenched with a wave of sensation that reminded her just how close to orgasm she had been when Edward had handed her over. ‘What do you mean you’re his gift to me?’

‘Edward’s a bit of a voyeur, and he wants to watch your pleasure.’

Alex chuckled, and she realised his hand was working its way beneath the slit of her dress. ‘Hardly. Edward isn’t exactly what I’d call a wanker. Trust me, he’ll be more than ready for you when you’re finished with me.’ He shoved the hem of her dress aside until her bare pussy pressed against the bulge in his trousers, then he flicked a finger into her pout so quickly she wouldn’t have been sure it happened if not for the rush of pleasure and wetness. He pulled her still closer. ‘You need to come. Use me. That’s what I’m here for.’

‘I thought that was Edward’s job.’

Another chuckle. ‘I promise you, Edward won’t disappoint.’ He thrust hard against her. ‘Do you want me?’

‘What do you think? You just fingered my cunt.’

Another dip, this time slow and serpentine. With a deft hand, he freed his cock. She didn’t know how he’d managed it, but there, in plain sight with moves that would have made a magician jealous, he slipped his substantial erection between her legs, then he lifted her onto him. With one thrust and a grunt she was completely penetrated. All she could do was wrap her legs around him and hang on, marvelling that with each thrust he never missed a beat of

the music. In fact, he continued the dance as though nothing out of the ordinary was happening, hands cupped supportively under her arse, dancing amid the few other couples who moved beneath the sparkle of the disco ball. Were they blind? Could they not see that Alex was slinking around the dance floor, hammering her cunt with each pulse of the tango?

That did it. Suddenly it was as though champagne had been uncorked inside her. She gave a startled little cry as her orgasm exploded up through her, rocking her from head to toe with its impact.

When the aftershocks subsided and the music stopped, Alex danced her off the floor to a discreet nook near a linen cabinet and helped her dismount. Then with a heavy grunt, he spurted his wad into a handkerchief he’d extricated from his pocket. When he finished wiping his cock, he said, ‘It wouldn’t be polite for me to come inside you when you’re with Edward.’

The sense of excitement she felt at Alex’s words was visceral. And surprising. She’d just had totally hot sex with him, and in truth she wouldn’t know Edward if she saw him, but still it was Edward she wanted. Maybe their time together on the train had somehow bonded them. It was certainly a relief knowing that he hadn’t pawned her off, even on such a good lover as Alex.

While Alex tucked himself in, Rita had time for a quick glance around the room. Her eyes now accustomed to the light, she could see only one booth occupied by a single diner. And though that booth was in shadow, she could still make out the shape of a tall muscular man seated, watching.

‘There, now I’m presentable again.’ Alex held the blindfold up for Rita. ‘I’ll just slip this on and take you back to Edward.’ 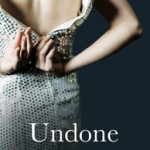