Posts Tagged ‘Suited to You Trilogy’

Do you know when I first started loving you? Demelza Hart Explores the Question

Thank you so much, KD for once again hosting me at you blog. 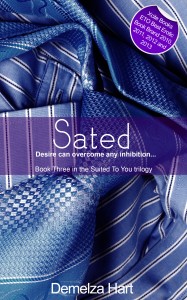 It’s all bollocks, of course, but in many ways this explains Tara and Patrick’s relationship in my trilogy, Suited to You.

Neither of them is looking for love at first, but perhaps they conform to the stereotype after all.

I love that moment in The Sound of Music when the Captain and Maria reveal when they first fell in love with the other. Touchingly and interestingly, for both, it’s very early on in their acquaintance, almost immediately in fact, with little incidents that reveal something personal and intimate about them. Is it always that way?

In Suited to You, Tara doesn’t believe herself to be in love with Patrick. She wants sex, she’s come looking for sex and, on the surface, she seems to conform more to the male stereotype – slowly falling in love with the person she’s attracted to. But perhaps she’s fallen far earlier than that?

As for Patrick? Well, despite all the moody, enigmatic brooding, he’s a bloke, after all – more predictable, perhaps. Does he fulfil the male paradigm and eventually fall in love with Tara? You’ll have to read the series to find out.

Here’s a taste from the final part, Sated:

‘Shit! I’m bloody supposed to be at work!’ 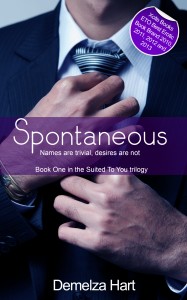 As the thin dawn light crept into the room behind the heavy velvet curtains, I tore myself awake with a panic.

Patrick rolled over and placed an arm over me before I could escape.

‘No, you’re not. It’s sorted, don’t worry. No one expects you to get from Devon to Dean Street in two hours.’

‘But Sarah’s not even my boss any more! What if the new editor’s there today?’

‘Relax,’ he said with a chuckle. ‘She’s not starting until next week. Technically, as assistant editor, you’re the boss, and you’ve just given yourself the day off.’

‘Have I?’ He was kissing over my body, which once again awakened instantly. He’d already reached my collar bone.

‘Mating rituals in the West Country.’ 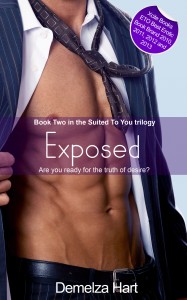 I tittered. ‘Oo-arr, moy darlin’ – does that mean spreading me all over in clotted cream and licking it off?’

I moaned and arched. He broke off and glanced up.

‘Among other things. Plenty of time to explore that –’ he spun me over and yanked me up onto my knees ‘– and more.’ And he thrust into me, hard and long, right up in one go.

Buy the Suited to You Trilogy Here:

Demelza Hart Talks About Having Your Cake and Eating It

It seems only a few weeks ago I was over here talking about Spontaneous, the first book in my trilogy, Suited to You. Hang on. It was only a few weeks ago! And here I am again, thanks to the wonderfully welcoming KD, to tell you about the second, which has just come out.

In Exposed, Tara continues her sexual exploration, guided by the skilful hands of The Suit, aka Patrick Lark. 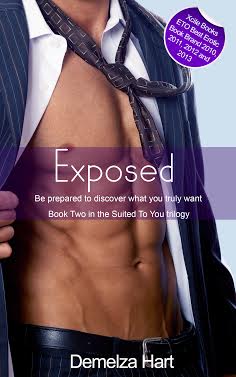 The sex is great, her relationship is great, but then, like too many modern women, she starts to think too much: This is too good. That’s not right. It can’t be right. Something is bound to go wrong. And rather than accept and enjoy it, it confuses her.

How many times have we done that in our own lives? If things are going swimmingly, we think there must be a catch.

The Suit seems to be the perfect man. Or is he? Tara can’t believe it, and as he won’t just talk to her and open to her – bloody men! – it leads her to emotional confusion and doubt.

But, through it all, she can’t let go of the sex. Great sex. Exhibitionist, risky, exposed, daring, incredible sex. Can she give it up? Should she?

Here’s a little snifter for you. Here, The Suit (Patrick) has pulled Tara away from an artist in a gallery just as the man thought he was going to get some action.

Patrick held my hand tight and walked me fast through the museum. We started practically to jog.

The Suit was grinning broadly and I giggled as we rushed faster and faster. We were soon outside and, breathlessly, I turned to him and crossed my arms, exaggerating my disapproval. ‘You are a wicked, wicked man.’

‘For you, anything.’ He smirked before kissing me.

‘That poor, lovely guy. That was cruel.’

‘Didn’t you say I had to be a cruel bastard to run a corporation?’

‘Yes, but hiring and firing people is one thing, leaving someone abandoned with a massive boner is something else. And anyway …’

I pouted. ‘I was rather looking forward to tasting him.’

He stepped into me, cupping my face with his hand and searching my eyes. ‘What? Are you thirsty?’

‘Always.’ God, I wanted cock and come. The craving was insistent.

The corner of Patrick’s mouth turned up. He hailed a cab. We climbed in quickly.

He’d unzipped his trousers as soon as the door shut. I didn’t think. As the rigid shaft lurched out, I dropped my head to it.

‘We won’t tell if you don’t,’ replied The Suit, his words forced out as I engulfed his cock in wet heat.

‘Jesus … how the fuck am I supposed to concentrate on the traffic with that goin’ on?’ moaned the driver, a young dreadlocked guy with a large tiger tattoo on his right arm. ‘I wanna look!’

I barely heard him. I sucked and sucked, sinking right down on the glorious hard prick so that it edged into my throat and made my eyes water. It wasn’t the first time I’d sucked The Suit off in the back of a car.

I wasn’t in the mood to go slow. He wanted his quick come and so did I. I wanted that taste. My fingers curled around the shaft and pumped, and I pulled my cheeks in tight while my tongue enthralled his tip.

‘Man, you got yourself a sweet little cocksucker there,’ declared the driver, managing to keep one eye on us and one on the road. ‘Ma-an! Ain’t every day I’m treated to somethin’ like this.’

Exposed – Book Two of the Suited to You trilogy is out now from Xcite Books.

Thank you so much to KD for having me over today.

Demelza Hart can be found on Facebook, Twitter, and at her blog. Do come over and say hello. Sated, the final part of the trilogy, is out in the new year.