Busted Boobies or Titting Around with Cover Art

When I got the rights back to the first two novels I’d had published, Broken and Shattered, I engaged the talented Nyla Alisia who works with me at Pussy Cat Press to create new covers for them. The publisher’s covers gave no clue as to what the books are about and had done nothing to sell them. I wanted to correct that.

While cruising a stock photo agency website, I happened upon the perfect picture for the Broken cover. The model looked like the protagonist, she appeared vulnerable, what she wore spoke to the dichotomy of the roles Jessica plays in the book, and the expression on her face was appropriately haunted. I turned the photo over to Nyla along with a synopsis, the first few chapters of the book, and the pitch:

Jessica lived luxuriously until her father lost everything in the dot.com bust. To continue her graduate studies and support herself, Jessica begs her professor for a research assistant’s position. He refuses unless she agrees to also serve as his slave. When in desperation she consents, he breaks her. Then, Jessica discovers she has a Dominant streak and exploits it.

What Nyla sent back was absolutely awesome. She had created a new background of a broken mirror, harshened the model’s makeup making her look even more haunted, and darkened the shadows. She selected the perfect font (aptly named “kink”) which I echoed inside the book using it for chapter headings and drop caps.

I was thrilled, amazed, and exhilarated to see a cover that so well captured what the book is about. I uploaded Broken to Amazon (print and Kindle), All Romance books, and Smashwords.

Imagine my surprise and consternation when I logged into my Smashwords dashboard more than a week later and discovered this note posted for Broken: “some of our retailers are cracking down on even illustrated nudity. Could you cover up our lady’s nipples a bit? :)”

Mine is hardly the first example of such censorship. On the Facebook page: “Amazon Censors” (of all places), the most recent discussions revolve around Smashwords censorship. According to Esmeralda Greene, “This isn’t new. Smashwords told me I had to change the cover of a book of mine before it would be accepted for their distributer’s channels because it used a *painting* that showed some nipple.”

I asked Mark Coker, Smashwords founder, about the censorship. His response: “Our policies have changed little in the last two years … We’ve always had a no-nudity policy on cover images. No nipples has always been standard policy. Other than nipples, fully bare breasts and penises on cover images, we and our retailers allow quite a bit.” He also took exception to the idea that there had been any recent changes to policies. “There’s always a chance that our policies have been applied inconsistently because the vetting process is a human process and subject to human error and subjectivity.”

I was left with the choice of being shut out of the Smashwords premium catalog or paying to have my cover remade. Frankly, I don’t care whether or not some of the Smashwords retailers carry my books. They don’t cater to an audience who has any interest in reading what I write. But, unless you are a publisher with more than 100 titles, the Smashwords premium catalog is the only way to get them listed on Ebook Eros (a Diesel eBooks company). I’ve written guest posts, been profiled, etc. on Ebook Eros. Most of the books I’ve published through Smashwords are listed there, including Shattered which is the sequel to Broken.

Coker did not answer my question as to why Smashwords has an all-or-nothing policy regarding distribution to retailers.

I spoke with Nyla. She is such a talented artist that she was able to hide the nipples without dramatically changing the look of the cover. She moved the model’s pearls over her right nipple and lengthened her hair over her left. On December 20, the cover was accepted into the premium catalog by Smashwords, which pushes it through (eventually) to Sony, Kobo, Apple, Barnes & Noble, and Ebook Eros .

I decided I did not want to have two different (even subtly different) covers for the same book, especially given the confusion already caused by the fact that this is a second edition and some of the first edition books are still out there. I went ahead and replaced all versions of the book with the new cover, which took a considerable amount of my time.

What does it say about our society that we use sex to sell everything from soap to shoes and then freak out when a woman’s nipples are exposed on a book cover?

In an excellent post about the Dossier Journal cover controversy last month, Lisa Wade, PhD, notes that the “social and legislative ban on public breasts rests on a jiggly foundation. It’s not simply that breasts are considered pornographic. It’s that we’re afraid of women and femininity and female bodies and, if a man looks feminine enough, he becomes, by default, obscene.” 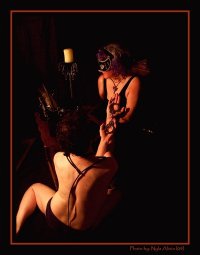 You can read reviews of her work and find links to purchase her novels, poetry books, and individual short stories on her website. You can also find her at Smashwords, Twitter, Google, Live journal, and Facebook.

In addition, I.G. Frederick is an accomplished book designer and together with the awesome artist Nyla Alisia and her submissive Patrick (web designer extraordinaire) provides services to indie authors and small presses as part of Pussy Cat Press. Pussy Cat Press services — including elegant cover design for print and electronic books, print and electronic book formatting/design, and web development and design — are available on a fee-only (no royalty) basis with all rights for work produced owned by the client.