Serial Fun: All Good Things have to Come to an End … Or Do They?

Friday will be the final episode of In The Flesh. It’s been a great experience for me to have shared the 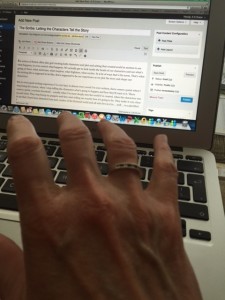 writing and unfolding of a whole novel on my blog — often finishing up the week’s episode only a few minutes before I was due to post it. I had no real idea where the story would lead when I began it almost a year ago. I thought perhaps a novella, but I never dreamed that in the end it would be an entire novel of 93,000 words! Nor did I imagine it would become a part of my Big Project, The Medusa Chronicles. That wasn’t planned. Not only has what started out as a short story ended up to be a full-length novel, that belongs to Magda Gardener’s world, but it inspired a sequel as well. You’ll hear more about that at the end of Friday’s episode.

In the Flesh began life as a 5000 word story called “God’s Wife.” It went through several reincarnations as a short story – all of which I felt a lot of energy for, none of which felt complete. My goal in sharing the extended version on my blog was to see if I could write the completed story, and to find out for myself exactly what the ending really was. I was delighted when Michael burst onto the scene. I’d never written an angel before, and there’s a lot more about him still to be told. I was even more delighted to discover that he worked for Magda Gardener, that he was a part of her Consortium. And I was absolutely over the moon when Magda involved Alonso Darlington and his people – all of whom have stories of 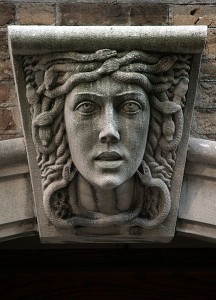 their own. (Can’t wait to write Talia’s story!) The biggest surprise and delight of all for me, though, was Susan’s choice and her wonderful scheming plan to save Michael’s life and imprison The Guardian so he could do no more harm. In drawing Alonso into her plan, as she did, she blew the doors off of what I saw as the completion of the story, and made it clear that there was so much more of her tale yet to be told.

When I’m writing a novel for a publisher, I seldom experience the level of immediacy, of fluidity I did while writing ITF as a serial. There’s usually a much more concrete plan – though within it there’s a lot of wiggle room. But when I’m approaching each week as an experience that’s happening for me only a few days, at most, before my readers experience it, anything – absolutely anything – can happen.

Magda Gardener’s world is huge, and her Consortium includes people, monsters and beings I never would have expected. Her own story — she’s a lot more protective of, (Though I have every intention of wheedling it out of her) but she shares the stories of her people with her Scribes, among which I have the dubious pleasure of being counted – though fortunately I didn’t have to go through quite what poor Susan did to get the job. 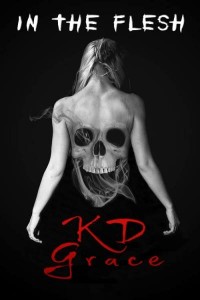 In the meantime, after Friday, In the Flesh will be up on my blog, in its entirety, for you reading pleasure. It will also be up on Wattpad for a couple more weeks as well. Enjoy! As always, your feedback is very much appreciated.

February 10, 2016   Tags: In The Flesh serial, inspiration, Medusa Chronicles, my writing process, serial writing
Category: Blog   Comments Off on Serial Fun: All Good Things have to Come to an End … Or Do They?