I. G. Frederick Discusses Judging a Book by its Cover

I’d like to welcome I. G. Frederick back to my site to share some very interesting insights into something very near and dear to every novelist’s heart, book cover design and its effect on sales. 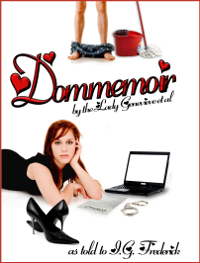 People do judge a book by its cover. Case in point: my third novel, Dommemoir. The original publisher approached me and offered promotional/marketing support to get me to sign with them.

They sponsored a launch party that featured a cake topped with a marzipan male genitalia wearing a ball spreader. I wrote guest blog posts. I gave workshops. I appeared on radio shows. I held a second launch party hosted by a Body Piercing & Tattoo establishment whose owner had been a resource for scenes in the book. The book received excellent reviews and was a Night Owl Romance Top Pick.

After two years, I got the rights back to the book and re-released it. I did none of those things. No party. No guest blog posts. No radio shows. I mentioned the book on Twitter, Face book, and G+.

The only thing I changed (except for correcting some minor typos) was the interior and cover design. And, while the former might make for a better reading experience, the latter is what dramatically increased my book sales.

The original cover looked okay in print, but it did nothing to sell the book. The thumbnail was a black blob. I never liked it, but I’d already gotten the publisher to ditch an even worse cover design and knew I’d never get this one changed.

One of the advantages of Indie publishing is having complete control over how your book looks. But, that also means you own responsibility for every facet of your book’s appearance. I’m fortunate in that I have skills as a typesetter and book designer. The interior design of the first edition of Dommemoir was just plain boring and I could fix that.

I’ve had some graphic design experience, and I’m comfortable creating simple covers for short stories. But, I’m not a designer or an artist. As I mentioned on this blog at the beginning of the year, I already had Nyla Alisia at Pussy Cat Press, who is both, redesign the covers for the second editions of Broken and Shattered. (Sales for both have also increased dramatically with the new covers. They are not romances so they have a smaller audience. But, they still outsold their original, three-year publisher release at the end of May after less than seven months with new covers. Some of those sales could be attributed to the lack of e-books when the books were originally released. But they’re selling in paper as well.)

She took the elements that touched her, that made the story powerful, and combined them in a unique cover that captures the emotional content of the book. I know if she had tried to explain the cover to me or showed me a sketch to convey the idea, I probably would have vetoed it. But, the minute I saw what she created, I fell in love and only requested some very minor adjustments.

In one image she managed to cover every critical element of the book, without giving away too much. It is absolutely perfect! And, the sales numbers prove that a good cover really can make or break a book.

Recently, I taught a class on self publishing at a local college. When I spoke about cover design, I started with a bag full of books that I believe have great covers. One by one, I pulled each book out of the bag, held it up for a few seconds, and put it back. Then, I asked my students to tell me what genre that book was marketed in. (Genre being a way to categorize the emotional response expected from a reader.) Even with only a few seconds to view each cover, at least one student accurately stated the genre of each book.

And, then, I went on to explain why that was important.

You have to write a good book. You have to put it in front of the right audience with a blurb that entices them to read a sample. But, if you don’t have an eye catching cover that captures the emotional tone of the book at first glance, you’ll never get readers to click on your cover instead of one of the dozens of others vying for their attention.

You can download the first two chapters of Dommemoir or a free short story excerpt, “Jarod,” from her website where you can also read reviews of her work and find links to purchase her novels, poetry books, and individual short stories. She resides in the Pacific Northwest of the U.S. with her submissive, Patrick, and three other felines.