Posts Tagged ‘another glass of champagne’

Following on from the bestselling novel, Another Cup of Coffee, and the seasonal Christmas novellas Another Cup of Christmas, Christmas in the Cotswolds, and Christmas at the Castle, Jenny Kane brings you the final instalment in the Pickwicks Coffee House adventures. 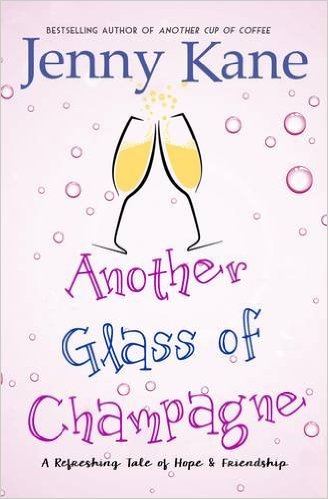 A warm-hearted, contemporary tale about a group of friends living in a small corner of busy London, by bestselling author Jenny Kane.

Fortysomething Amy is shocked and delighted to discover she s expecting a baby not to mention terrified! Amy wants best friend Jack to be godfather, but he hasn’t been heard from in months. When Jack finally reappears, he s full of good intentions but his new business plan could spell disaster for the beloved Pickwicks Coffee Shop, and ruin a number of old friendships…

Meanwhile his love life is as complicated as ever and yet when he swears off men for good, Jack meets someone who makes him rethink his priorities…but is it too late for a fresh start?

Author Kit has problems of her own: just when her career has started to take off, she finds herself unable to write and there s a deadline looming, plus two headstrong kids to see through their difficult teenage years…will she be able to cope?

A follow-up to the runaway success Another Cup of Coffee.

‘My goodness, woman, you look like the proverbial beached whale!’ Amy grinned at the teasing smile on her former boss’s face.

‘Thanks, Peggy. I know I can rely on you to be ready with a huge compliment!’

‘Huge is the word, and you are more than welcome!’ Taking advantage of a lull in custom, Peggy followed Amy to where Kit was working, and pulled out a chair for her friend before sitting down herself. ‘So how long have you got to go now?’

‘Only two months, which is nothing like as long as I need to get ready, or even get my head around what’s happening to me! I have far too much to do before the baby comes, although we’ve almost finished decorating the nursery at last. I haven’t even managed to find anyone to cover my job at Home Hunters yet.’

Amy thanked Megan, Pickwicks’ chief waitress, as she delivered a tray of drinks and half a huge carrot cake for the three friends, before asking Kit, ‘I don’t suppose that lovely husband of yours fancies coming back to the business while I’m on maternity leave?’

Kit shook her head. ‘Not a hope. It did cross my mind after Phil gave up running Home Hunters that he might have withdrawal symptoms and want to go back, but he took to running the bookshop like a duck to water. I can’t see him ever going back. And he wouldn’t have the time, to be honest. Did I tell you that they’re so busy now, he and Rob have employed a guy to help them with their new educational courses at Kew?’

Amy beamed. ‘No, you didn’t. That’s fantastic! I bet Jack would be thrilled for them if he was here.’ Suddenly pensive, she picked up her cup, ‘I don’t suppose either of you have heard from Jack?’

Peggy shook her head as Kit said, ‘Not a word. I thought he’d keep in touch with you though, Amy, even if he went quiet on the rest of us.’

‘Paul says he’ll turn up eventually, but I’d rather like to be able to tell Jack about this bundle,’ Amy patted her stomach, ‘before he or she stops being just a bump in my jumper. I might ask him if he wants to be godfather.’

Kit nodded. ‘Jack is godfather to the twins, and although he’s a dreadful role model on the morals front, both Thomas and Helena have always found him great fun, and say that having a gay godfather is, and I quote, “Well cool”.’

Peggy had never understood the loyalty Jack’s two ex-girlfriends felt for him considering how appallingly he’d treated them both. She certainly wouldn’t want anyone who’d stood her up on her wedding day – albeit only in the role of usher – to be a godparent to her child, but she simply asked, ‘How long has he been AWOL for?’

Amy frowned. ‘It must be more or less four years since I last saw him, and about twelve months since I last spoke to him. It’s not so much being AWOL as missing in action. How about you, Kit?’

Peggy and Amy exchanged glances as they saw Kit staring blankly into her soup bowl-sized cup of black coffee.  ‘Kit? You with us?’

‘What? Oh, sorry, guys. I didn’t get much sleep last night, I phased out for a minute. What was the question?’

Peggy had noticed how distracted Kit had been lately, although instinct told her that she shouldn’t ask her friend about it yet. ‘When did you last hear from Jack, honey?’

‘I’m not sure, must be at least a year. That is very Jack though, isn’t it. I bet he’d get a kick out of the fact that we’re all back here wondering where he is and if he’s OK.’

Amy, who’d had similar thoughts herself, grimaced. ‘I wouldn’t be surprised – although I’d like to think that at his age he’s finally grown out of playing those games.’

Kit and Peggy laughed in unison. ‘No chance!’ ‘I assume he’s either still travelling around the world – or working in someone’s garden, using that horticultural qualification he got after Paul and I got married.’

‘Sounds possible, and of course,’ Kit let her inner storyteller go in a way she wished she could on paper, ‘if Jack has spent all the inheritance his grandfather left him, he could have got a job in the grounds of some posh house, had a torrid affair with the heir to the manor, and be in the middle of a society scandal.’

Amy smiled as Peggy divided the carrot cake into mountainous slices. ‘That sounds entirely possible, and I sort of hope it’s true! The boyfriend bit, I mean, rather than the scandal bit.’

Pulling her cake plate closer, Kit shrugged. ‘I’m not sure he’d risk another relationship, not after Toby hurt him like that. I suspect he’s reverted to full-on sleeping around mode.’ Realising she had sounded rather curt, she added, ‘I’d like to be wrong though. If he settled down a bit, he might come home…’

Jenny Kane is also the author of quirky children’s picture books There’s a Cow in the Flat (Hushpuppy, 2014) and Ben’s Biscuit Tin (Hushpuppy, 2015).

Keep your eye on Jenny’s blog at www.jennykane.co.uk for more details.