Hello everyone – I’m Janine Ashbless and today I’m delighted to announce that I have managed to blag an interview with Azazel, the hero of my new novel Cover Him with Darkness—

Janine: Er … I’m sorry? Did I say something wrong?

Azazel: Not at all. Please, do go on.

Janine: Okay … Azazel is, of course, a leader amongst the fallen angels. He was imprisoned under a mountain in the remotest part of southern Europe, and guarded there for millennia by a family who kept him secret until the last of that line, Milja, disobeyed the Divine command and risked her life and soul by letting him go free. You must be feeling pretty relieved then, Azazel?

Janine: Really? Okay – so how do you feel?

Azazel: Angry. Yes, that’s not inaccurate. Imagine you’d been tied up for five thousand years. That your wife and children had been slaughtered. That your brothers had all been incarcerated too, for the heinous crime of becoming sexually involved with humans. Then tell me that you wouldn’t be feeling a teensy tiny bit like burning Heaven to the foundations and pissing on the ashes.

Janine: That’s your human wife and children, yes? That’s where it all went wrong, wasn’t it? You were set to watch over the human race, but you ended up…

Azazel: Falling for them.

Janine: [laughs uneasily] Well, I’ve got to say you don’t seem to have learned the lesson from your time in prison. You launched straight into a relationship with Milja, didn’t you?

Azazel: She was my only hope, my only joy, in five thousand years of torture.

Janine:  So don’t you feel bad about risking her life? Exposing her to the wrath of the Heavenly Host, and all those priests who are trying to recapture you?

Azazel: That’s a subject you might find it safer not to bring up.

Janine: Fine – let’s stick to some easy questions. Say … How old are you?

Azazel: Four billion years. Give or take. Slightly older than life on this planet.

Janine: Well that clears up the “seven days” question … And Milja is twenty-three. It’s hardly a relationship of equals, is it?

Azazel: Did I say it was? She’s mine. She loves me. That’s what matters.

Janine: She loves you? Don’t get me wrong—I can sort of see why. You’ve got the whole gorgeous Byronic dark-n-dangerous look going for you … even if the silver eyes are kinda creepy … Look, is that even your real form, or is it something you put on to please the girls?

Azazel: What do you think?

Janine: I’m thinking No, then.

Azazel: Pray you never find out.

Janine: Um, where was I? Oh yes – clearly there’s a mutual lust, but it takes more than red-hot filthy sex to sustain a relationship. Don’t take this the wrong way, but do you love her?

Azazel: Of course. I told you – she is mine.

Janine: You see, that’s the bit I’m struggling with. She must be like a mayfly from your point of view – here today and gone tomorrow. And fragile and useless and completely ignorant. How can someone like you, with all your power, love that?

Azazel: Hardly useless. She freed me. She saved me. She loves me. And we all need love, don’t we?

Janine: You mean that literally?

Azazel: The Almighty has withdrawn His love from His outcast sons. We must have something to take its place, or we go out like flame with no fuel.

Janine: So you … I mean, that sounds a bit vampiric, if I’m understanding you right. You need Milja to love you because you’ll die otherwise?

Azazel: I’m sure your readers will find that terribly romantic. Won’t they?

Azazel: I never said I was the hero. You’re the one who used that description.

Janine: Um. Well, it’s a romance, you’re supposed to be…

Azazel: If anyone’s the hero it’s that Egan who keeps trying to rescue Milja. He’s like a faithful dog, bounding to her side at every crisis.

Azazel: What do you mean?

Janine: Nothing. Never mind. Forget it. Oh dear. If you’re not the hero, Azazel, then what are you?

Azazel: I’m a fallen angel. I’m damned for eternity. I imagine I must be the villain, surely?

Azazel: [smiles] Tell that to God, Janine. See how far it gets us.

I was book-smart, as they say in America – there was no such phrase in our village, though they understood the concept perfectly – and I was burning with curiosity, and not wise. One day I lay down beside him on the stone and nested my head on his chest. I could hear the slow beat of his heart. The bars of his ribs were like carved prehistoric rock-glyphs, and I walked my fingertips across each ridge and furrow. The skin above his hip was so smooth it was like stroking feathers, but the old altar cloth felt damp and coarse in comparison. There was something repulsive about the feel of the grimy cloth that preserved his modesty. With my right hand I drew off that swatch, and then for the first time I touched him without the excuse that I was tending him. Without any excuse at all.

Hair, matted into curls. Below that, duskier skin. I shut my eyes. My hand, for once, was bolder than my gaze.

A small cool heft in my hand, yet heavy with a secret weight: the significance invested in the forbidden. My heart was racing, far faster than the heavy beat against my ear. My mind shied away from what I was doing. But my body seemed to be sure of what it wanted, and urged my hand to its task.

Tentatively I began to caress him.

He responded to that. Not just that sleeping creature stirring to wakefulness under my open palm, but his heartbeat waking with a kicking thud  and then his whole frame following on – his back stretching, his breath catching in his throat, his toes flexing and curling. I snatched my hand away, terrified and thrilled, and when he groaned deep in his chest I felt it through my bones.

I didn’t recognize the name, if it was a name. His eyes were wide open, staring, but I couldn’t be sure he saw anything. I pushed myself up into his line of sight.

His cracked lips parted, and he made a sound of need. He was beautiful in a way I couldn’t understand: so beautiful I felt it as pain. So I returned my hand to its former position, and nearly jumped with shock when I found that everything had changed. Nothing soft any more, and nothing cold, and just so much more of him, flesh brought into existence from the nothing, from the void. Like a miracle.

I wrapped my hand around that burgeoning miracle.

So heavy. So strong. My hand embraced that hardness, stroking. His breath started to come faster, with a little tremble at the end of each exhalation, interspersed with murmured, unintelligible words. Soon he was so eager that he was too thick for my grasp.

I paused. I wasn’t entirely sure where this was going, or how long it would take to get there. My own body was a cauldron of conflicting needs and fears. 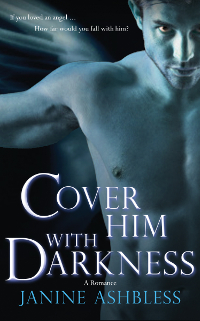 What happens when an archangel banished from heaven falls in love with a very human woman? Milja’s story begins when she is shown the winged prisoner her father, the village priest, keeps hidden away in a mountain cavern. This mysterious and unearthly charge is a beautiful being like the most handsome of men – and yet not. Unable to keep away from this silent creature chained in darkness, Milja is torn between family loyalty and her growing connection to their prisoner. One day her father discovers their forbidden intimacy and sender her off to America to be raised by her aunt in Boston. But Milja cannot forget her the one she loves—and she determines to free him even though that puts everything at risk: her family, her life and her soul.

Cover Him with Darkness, the story of what happens when a young woman releases a fallen angel from centuries of imprisonment, is available from October on Amazon US : Amazon UK

“If you loved an angel, how far would you fall with him?”

“Calling Cover Him With Darkness a romance is like calling a Lamborghini a cute little car. Janine Ashbless has broken every unwritten rule of writing romance and makes it work most spectacularly—it’s dark and gritty and so beautifully written that the words are pure poetry.”

—D. L. King, editor of Seductress and The Sweetest Kiss

“This book was truly a fantastic read.” 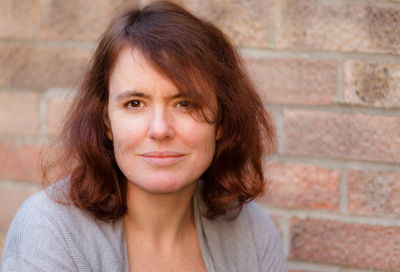