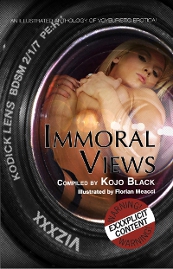 When the mysterious ‘Woo Woo Man,’ JONATHAN takes on the thin strip of bramble-infested ground in the Blue Bell Street Allotments, veg gardener extraordinaire, ROSE, whose bedroom window overlooks his ‘small holding,’ wonders what idiot would take on such a project. When she ‘accidentally’ sees him chanting a bit of woo-woo and having a midnight wank under a full moon in his newly rotovated plot, she suspects his methods aren’t found in any RHS manual.