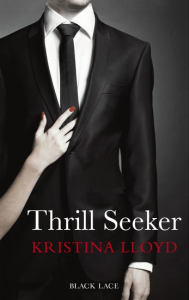 It’s my pleasure to have the very lovely Kristina Lloyd as my guest today. Kristina is sharing a little about her new novel, Thrill Seeker. Welcome Kristina! Do tell!

Thanks for inviting me over, KD! I’m here to share a little about my new book from Black Lace, Thrill Seeker, and would like to introduce my central character, Natalie Lovell.

For Natalie, the exploration of her submissive sexuality on her own terms is key part of her self-actualisation. However, haunted and inhibited by incidents in her past, Natalie has taken some years to reach a point in her life where she feel brave enough to move forward. As she says:

I realised I had two choices. I could stick my neck out and start being honest about my desires, or I could suppress my feelings and remain in the closet, hoping someone would eventually find the door to let me out. Basically, I could live or die; or at least, live a life not fully realised. Giving up on certain aspects of yourself, the parts others might find distasteful or threatening, is the easiest thing in the world. It’s the safest route, the path of least resistance.

Natalie has played safe and secretive for too long. So she ventures into kinky internet dating, her first success being Baxter Logan, a charismatic, sexy, screwed up Scot who goes on to betray her after they’ve fallen in love. Readers meet Natalie on ‘take two’ of her online explorations where the risks have already escalated: she’s confessed to having kidnap fantasies to an intriguing stranger, Den, who hasn’t even offered a photo of his face.

This isn’t a D/S relationship which begins with contracts, safewords, clear consent and unambiguous boundaries. Many of Natalie’s fantasies centre around being forced, rendered powerless, and having choice removed. She enjoys the taste of fear. When Natalie discovers the term ‘edgeplay’ she finally has a channel for articulating and formalising some  of her desires. Here’s Natalie, mulling over what she wants:

Although the definition seemed hard to pin down, I understood edgeplay to mean scenes where kinky activity takes place on the threshold of the submissive’s fear. Safewords aren’t used since they remove the fear. I was pleased to learn about edgeplay, not least because its existence made me feel less alone in wanting to be taken to the edge of safety, to the zone where my lust could blossom in darkness.

I recalled a word Den had once used in email: liminal. I’d had to look it up. Liminal, I learned, referred to times and places which were neither one thing nor the other: the margins and boundaries; the in-between spaces; those unstable moments of change such as the hours of twilight, the greying, glittered suspension between day and night.

That’s where I wanted to be, not secure in a walled fortress but blissing out on submission in the shifting magic of dusk.

Ultimately, my greatest concern was not my welfare but that, in clarifying an arrangement, Den and I might negotiate its heart out by stripping away risk and fear. What would be the point? I wanted to feel this in my veins, in my deepest shadows. I wanted lust spiked with terror. I wanted to be in his power, my desires ostensibly secondary to his. I wanted to know the truth of my fantasy of being abducted and taken to a place where I would be tested. How far could I go? What would happen to me on the margins of fear? Who would I become? That’s what I wanted. I didn’t want us to arrange to play a nice game by nicely discussed rules.

If you enjoy your erotica on the light and cheeky side, Thrill Seeker may not be for you. But if you want to try a book my publisher describes as  ‘Fifty Shades Darker than EL James or Sylvia Day’ then strap yourself in and hold on tight. Thrill Seeker is intended to be a wild, exciting, scary ride!

To find out more about Thrill Seeker, visit my blog and follow the links for a couple of sexy excerpts.

Thrill Seeker is out now in the UK in paperback and Kindle, and will be released in the US and Canada in late June. 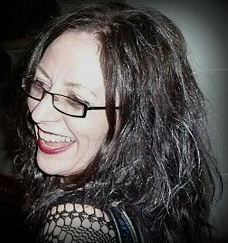 One Response to “Thrill Seeking with Kristina Lloyd”