The Taming, Part 3 of The Pet Shop Trilogy, is FREE! 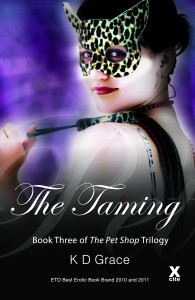 is now being offered by Xcite in a limited Kindle edition three-part series. Part Three, The Taming, is now available for FREE for the next five days on Amazon beginning on Wednesday 15th August. And, since Xcite is only too aware that Pets are addicting, to help feed your addiction for hot kinky romance, Part One, The Gift, and The Secret Life of Pets, are just £.77 each in the UK and $1.19 in the US.

(Just a quick reminder. If you’re an early bird on the other side of the Pond, the U.S. link may be available a few hours later than the UK link because of the time change. But be patient, and naughty FREE Pets will swiftly be coming your way)

Here’s a little teaser of what you’ll find in The Taming. Remember, though the download of The Taming is free, it’s anything BUT tame.

Reclusive philanthropist, Vincent Evanston has told Stella James she can have Vincent or she can have Tino, the Pet, but she can’t have both. The problem is Stella wants both. As the complications of wanting both sides of a man who can’t allow himself to be whole mount, Stella must walk the thin line that separates the business of pleasure from the dangerous business of the heart or suffer the consequences.

‘It’s not bad enough they saddle me with Tino, now I get his female counterpart.’ The familiar handler in his black suit pushed his way in and started tugging at Stella’s clothes. ‘Do I have torture me written across my forehead? Is it bad karma? I swear I don’t know what I did to deserve you two.’

‘Bullshit! Of course you can do it, and it’s not alright, now get out of your clothes and stop talking or I’ll have to spank your arse, and don’t think I won’t do it. Fuckin’ hell, first Tino, then you, and now both of you. They don’t pay me enough for this.’

Suddenly she stopped fighting him and he continued with the stripping. ‘Did you say Tino? Tino’s with you.’

‘I’m speaking English, aren’t I?’ He gave her a resounding smack across the arse he’d just bared and shoved the trench coat at her. ‘Get into this, and you’d better manage to at least act horny when you get there ‘cause I don’t have time to strap you into the Foreplayer.’ He smacked her bottom again, then wrestled her into the coat and jerked the sash tight. ‘Now give me your keys and let’s go unless you want your arse and Tino’s spanked soundly by your keeper for being late when you get there. Tino might like that just fine. Not sure how your tender little bum would hold up.’

She was trembling so hard by the time she got to the van that the handler had to help her in. He had taken the trench coat and shoved her into the large pet carrier before she realized she was sharing it with Tino, who scooped her to him in a tight embrace, and the delicious scent of the big Pet filled her nostrils and made her cunt clench and her pulse race. But it was Vincent’s smell too. Her nose wouldn’t be fooled this time, no matter how differently the two of them behaved. And the clench in her cunt was followed quickly by an even harder clench in her heart and a knotting in her stomach as she thought of waking up to find him gone. What the fuck kind of game was he playing?

With a growl that sounded too wild to belong to a Pet, she shoved her way out of his arms and elbowed him in the stomach generating enough momentum, even in the confined space, to make him grunt. The look of hurt on his face made her even more angry. How dare he be hurt? She wasn’t the one who ran away, and she’d had about enough of this emotional bate and switch. When he reached for her again, she bit him, hard. He sucked air and flinched. She wasn’t certain, but she thought he might have actually had to wrestle back a curse.

She shoved her way to the far corner of the pet carrier, banging her head on the side as the van driver took off. The handler, who stayed in the back with the pets pounded on the top of the cage, clearly misunderstanding what was going on.

‘Tino, you keep your cock to yourself until I get you there, you hear me? If I see any sign of spunk, or smell it, I’ll tell your keeper to tie that cock of yours in a knot and make you hold your load all weekend, you got that?’

Not if hell freezes over will he find any spunk, at least not any having to do with her, Stella thought.

She could see Tino’s pulse pounding against his throat, and his chest rose and fell like he would hyperventilate. And he was hard. He was always hard, damn him!

She pressed her cheek to the side of the Pet carrier and tried to ignore the way his gaze bore into her, tried to ignore the press of their legs, which was unavoidable in the tight space. And the smell of him. My god, how could she ignore the smell of him? She dreamed of his scent. She masturbated to thoughts of his scent, and here she was trapped with it, and aching for it, and still so furious she could barely breathe. She wanted to yell and scream at him, she wanted to know why, why he had left her. What game he was playing?  Instead she sat with her back pressed as tightly to the slats of the carrier as possible and tried to ignore him.

The next time he reached for her, she slapped him, slapped him hard enough to make her hand sting.

‘What the hell are you two up to?’ The handler rattled the pet carrier again. ‘If I have to drag you both out and wear the spanker out on your 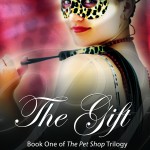 bottoms, don’t think I won’t. Now knock it off.’

Stella pulled herself as far into the corner as she could get and tried to ignore the smell of Tino’s arousal, made even more obvious by his erection bobbing against his thigh, the thigh he made no effort to pull out of her space. She shoved at him. But he didn’t budge. She tried to turn her back on him as much as she could, but he pushed in still closer, not allowing her to ignore him.

He kept pushing at her and pushing at her until she kicked at him, which was useless with bare feet in such tight quarters, but he took the opportunity to pounce, nearly upsetting the pet carrier. The handler cursed and uttered a string of threats, most of which Stella didn’t hear because she was fighting to keep from being pinned under Tino.

The van screeched to a halt with both pets being shoved by the momentum to the front of the carrier. Then the carrier door flew open and Tino was wrestled out by the handler and the driver. ‘Goddamn it, I said knock it off!’ The driver held Tino while the handler hooked his collar to a short lead and a pair of hand cuffs that were attached to the wall of the van, then he stormed out of the van and Stella could hear him shouting into his mobile something about all hell breaking loose.

Tino ignored it all, as though nothing else in the world had his attention but her. His gaze was now unreadable, possibly a little more like

Vincent, but then how the hell could she tell who he was playing at. The van driver stepped out to have a fag, and she took advantage. ‘You left me, you son of a bitch. You left me without telling me why.’

She swallowed the last word as the door to the van burst open and the handler shoved his way back in to sit down next to Tino. ‘Lucky for you two miscreants the Professor assures me he’ll have no trouble handling misbehaving Pets. I think he rather likes the idea. The thought of you two being soundly disciplined definitely warms the cockles of my heart.’

The driver got back in and the van headed back down the M 25. This time the look on Tino’s face was utterly wounded, a look she couldn’t bare. She closed her eyes fighting back tears.

2 Responses to “The Taming, Part 3 of The Pet Shop Trilogy, is FREE!”