The Story Behind The Story: Taken By Surprise by Nichelle Gregory

The lovely Nichelle Gregory is my guest today on A Hopeful Romantic, and she’s sharing the story behind her sizzling paranormal romance, Taken by Surprise. Welcome, Nichelle!

When I started working on Taken By Surprise, I knew I needed a unique heroine name that was memorable with a totally feminine feel. Finally, I was working on the right story and the right character for the name!

The Greek translation for Zori is: “Golden Dawn.” Beautiful, no? And so fitting for my wickedly beautiful heroine!

So, I had a name, but what exactly was Zori? I knew my hero would be a werewolf and I needed Zori to be just as fearsome. She had to be a supernatural being, but which one? I wanted to pick a female creature to write about that hadn’t been overly done. I wracked my brain for the perfectly fierce heroine. She had to be tough, yet sexy, scary, yet completely relatable to female readers.

And then it hit me! I would incorporate my love for Greek mythology and select one of my fave mythological creatures to base Zori after! Once I knew what Zori was, the rest of the story flowed. Taken By Surprise was one of those tales that literally wrote itself! The submission call I was crafting this tale for only wanted short stories of 5,000 words or less. Taken By Surprise ended up being just short of 4,000 words.

Taken By Surprise surprised me! I wasn’t certain I could truly broaden the story without disturbing the feel of it and I definitely didn’t expect it to be as long as it ended up being.

Lesson learned? Don’t let a rejection make you stop believing in your story. Do take another look at it, rework it if necessary, but pass it on to someone else who might just treasure your tale as much as you do!

Zori revels in the control she exerts over the opposite sex; no man has ever challenged her in the bedroom or out…until she meets Greyson.

She’s beautiful, intelligent and sometimes deadly to the men who enter her bedroom. For Zori, voracious appetites for sex and food reign supreme. She’s never known rejection, romance or love…her life and heart has always been her own. The moment she sets eyes on Greyson, Zori makes it her quest to have him in her bed, but she’s finally met her match. Can two lovers with secrets face the truth and trust their hearts? 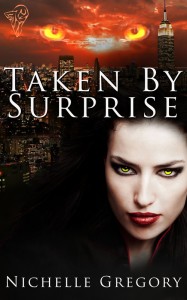 “No, thanks.” Zori barely flicked a glance towards the handsome blond ogling her body as she walked by. Men could be so pathetic. She looked across the sunken dance floor to the bar against the back wall to see her target tilt back a bottle of beer. Her talons scrapped against the smooth floor as she waded through sweaty dancers along the wall to reach the other side of the club. As she approached, he turned around and their eyes met. A zing of anticipation raced through her blood as she moved next to him at the bar.

The thrill of the hunt always excited her.

She leaned against the counter, fully aware of his dark gaze running over her body as she pretended to inspect the bottles of alcohol on display in front of her. With a casual toss of her ebony tresses, she turned her face to see arresting brown eyes staring at her with interest. She moved a little closer to him with a practiced shy smile. “I’m Zori.”

“Greyson.” He offered a slight grin before taking another sip of his drink.
Up close, her guy was taller and bigger than she first estimated which pleased her. She felt sorry for the expensive suit straining to give way to the hard muscles concealed underneath. “Happy Halloween.”

Greyson lifted an eyebrow. “Back at you.”

The sexy smile curving his full lips tempted her to pounce on him right then and there, witnesses be damned.

“Are you here alone?”

He turned his body towards her, his deep voice carrying easily over the loud music.

His eyes moved from her folded wings down over the rest of her body.

Zori smiled, pleased, even though she’d heard enough compliments to last a lifetime. “Dance with me?” She began to move her hips to the seductive rhythmic pull of the DJ’s house mix which was tripling her desire to get him alone.

Greyson looked down at her feathered feet. “Can you dance in those?” His gaze lingered on her sharp claws.

Zori laughed. “C’mon.” She led him to the dance area and was even more impressed to discover he was a great dancer.

He pulled her in tight as she closed her eyes, enjoying the feel of his strong body moving against her own. She wrapped her arms around the thick column of his neck and drew in a tempting whiff of his sexy cologne. Dancing was nirvana. This was the one time she allowed her male partners to take the lead which Greyson did so masterfully. Their bodies swayed and dipped to the music as one and Zori enjoyed every minute of it.

“Can I buy you a drink?” Greyson asked several songs later when both of them were breathless and laughing.

She took his hand as he manoeuvred them back to the bar. He stood out with his good looks and in his fine suit and females noticed him, eyeballed him, to Zori’s annoyance. She flashed one chick who had the audacity to step in the way of his path a venomous look that clearly said: He’s all mine, lady.

And she could hardly wait.

Taken By Surprise is available now with Total E-Bound Publishing!

Nichelle Gregory has been in love with books and writing since middle school. A lover of the arts, she enjoys anything that embraces the creative nature within us all. Bringing believable characters to life that thrill and excite her readers is a challenge that continues to push Nichelle. She loves creating stories involving super sexy alpha heroes with divine heroines in magical, exotic, and fantastic scenarios. So, gone on . . . Indulge your secret fetishes and desires in one of my simply sexy stories!   Visit her website http://www.simplysexystories.com and blog http://www.simplysexystories.blogspot.com

Thanks, Nichelle! As a lover of Greek mythology, and a lover of hot romance, I’d say you have a scorcher on your hands!

In London with Stella → ← The Secret World of The Pet Shop

5 Responses to “The Story Behind The Story: Taken By Surprise by Nichelle Gregory”