The Redemption of the Shrew Launches with a Tour and Giveaway

July 27, 2018   Tags: giveaway, launch, new release, romance
Category: Blog, New Releases, News   Comments Off on The Redemption of the Shrew Launches with a Tour and Giveaway

The Redemption of the Shrew 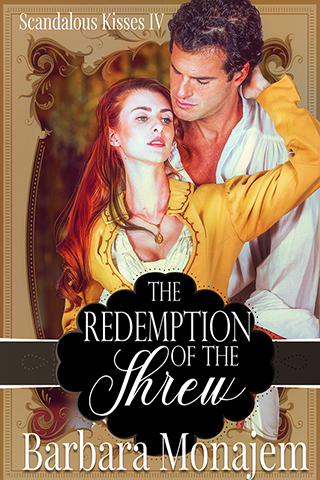 About The Redemption of the Shrew:

Nothing is more painful than rejection—particularly when completely naked!

Gloriana Warren doesn’t want to wait for marriage. Beneath her shrewish exterior is a kindhearted woman who uses her fortune for good. It doesn’t matter that the man she’s set her sights on claims impoverishment. She’s in love and determined to marry him. But her attempt at a moonlight seduction ends in disaster.

French marquis Philippe de Bellechasse has had it up to his gorgeous dark eyes with being pursued by lusty ladies. His escape to England from the violence of the French Revolution took a toll on his finances as well. Gloriana may be gloriously naked, but he’s just not ready to submit to her seduction.

But when a precious family artifact is stolen, Philippe must convince Gloriana he’s not the guilty party. He’ll steal it back for her, but on his terms. Gloriana, believing he despises her, has plans of her own. Working at odds is dangerous, but working together can be more so. Is Philippe willing to risk his heart again for a deliciously tempting shrew? 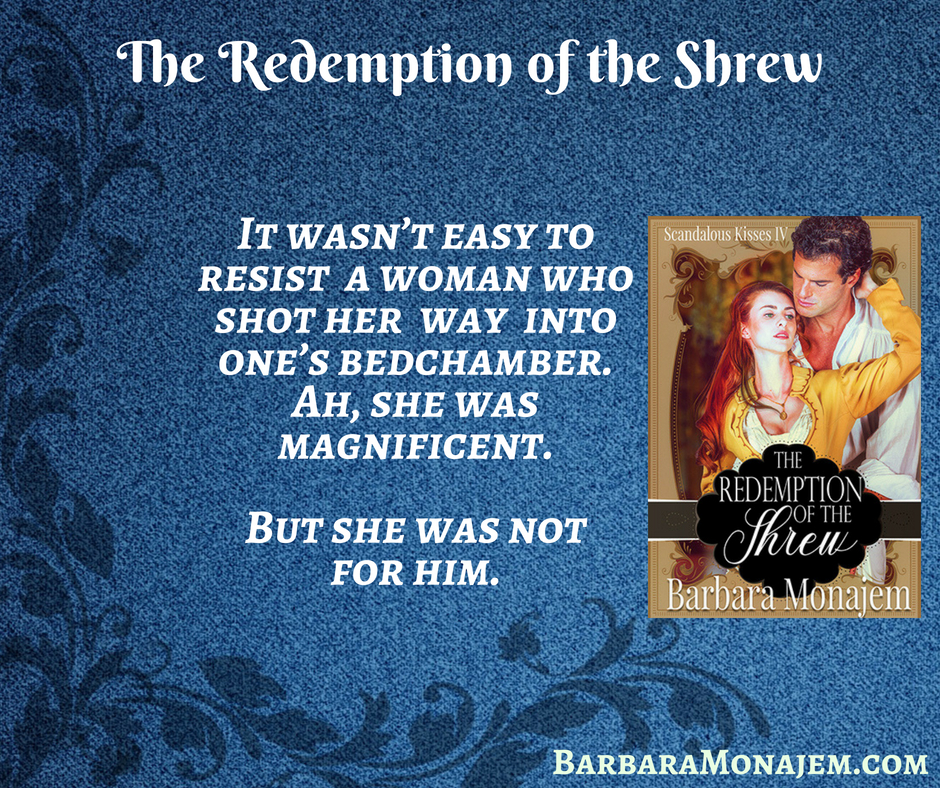 The Redemption of the Shrew Excerpt:

A clandestine meeting, particularly where nakedness is involved, is best arranged for a moonless night.

Or so Gloriana Warren told herself, for her mother would never have uttered such a scandalous dictum. Unfortunately, it was tonight or never. Tomorrow, the man she had sworn to love forever would leave Lancashire and return to London—without her. They wouldn’t be able to marry for years because of his stupid scruples about money.

Men and their tedious pride! She and the Marquis de Bellechasse loved one another. They shared the same lofty ideals. She had a substantial dowry. Marrying now made sense. Not only that, her mother would die happy.

So Gloriana was taking matters into her own hands. She had planned the upcoming encounter in glorious detail—every word, every gesture. As she emerged from the summerhouse to greet him, he would stand and stare at her, transfixed by her beauty.

“Darling Philippe,” she would say, reaching for him, offering herself without reserve. “Love is eternal. It cannot, must not be denied!”

“Ah, ma belle,” he would respond, his hand on his heart, his voice throbbing with desire. “I adore you. What a fool I was to think we could wait for years. Even another minute is too long. Tonight, I shall make you mine!”

She would fling herself into his waiting arms, swept away on the tide of his passion.

She wasn’t sure exactly how it would go after that, apart from plenty of kissing, but judging by her previous experience of Philippe’s kisses, it would be the most thrilling experience of her life.

She sneaked out the French doors, arms full of blankets, and glanced back up at Garrison House. Not a glimmer of candlelight showed in the windows. She hurried through the rose garden and skirted the lawn, keeping to the bushes and out of the moonlight. In the secret room under the summerhouse, she and her darling Philippe would be safe. Tomorrow they would announce their engagement to Mama. They would send for a special license and be married within a week.

Ten minutes later, she had set up a makeshift bed under the summerhouse and removed all her clothes. Shivering more from excitement than from the chilly night air, she waited for Philippe to arrive.

Tonight would be the most perfect night of her life.

The Marquis de Bellechasse left his horse in a convenient copse and made his careful way forward, pausing at the edge of the trees. Garrison House was reassuringly dark, but moonlight reflected off the ripples on the lake. The summerhouse gleamed white on its little knoll, exposed on all sides. He paused, listening. No sound disturbed the darkness except a nightjar complaining from a nearby oak. He hoped and prayed no one else was up and about tonight. He couldn’t afford to get caught with Gloriana Warren, but nor could he bring himself to ignore her passionate plea to see him once more before they parted.

He loved her—to the point of folly, judging by his current behavior. He had already said farewell, and yet here he was, trespassing on her brother’s estate at midnight to say it again. He dreaded her inevitable tears.

The door to the summerhouse stood wide open, which meant Gloriana was here already. Fine. Best to get it over with now. He took a deep breath and set out across the lawn.

He had almost reached the doorway when she came into view, rising from out of nowhere, her face pale, her hair loose around her bare shoulders. He halted, staring, his heart thundering. She continued to rise, her breasts round and luscious in the light of the moon. His eyes slid helplessly down the curve of her hips to the darker patch at the apex of her thighs . . .

Mordieu. He shook his head and began to back away. “No, chérie. We must not do this.”

She set her feet on the floor—she must have emerged from a trapdoor—and beckoned with those sweet arms, smiled with those lush lips. “Philippe, my darling, please come to me. I love you so much.”

“But love—” She faltered, then continued toward him, arms wide. “Love is eternal. It must not be denied.”

Sacrebleu, she was declaiming like a shoddy actress on the stage. The thought revolted him. Surely his idealistic Gloriana could not cheapen herself so. Anguished, he put up his hands to fend her off. “It is not possible, Gloriana. Not yet. It would not be right.”

She hurried forward, her breasts jiggling enticingly. “Truly, we mustn’t delay. My mother may not have long to live, and seeing me married well is her dearest wish.”

He didn’t care in the least about old Lady Garrison, who was the worst sort of snob. He shook his head. “No. To wait is best.”

“Philippe, I cannot wait. I need you now.” She reached for him, her nakedness inches away.

He gritted his teeth and took another step backwards. His imbecile cock was reacting to her, but he had long ago gained control over its demands. “I am sorry, but I must go.” He turned away.

She wailed, a sharp, keening sound, and immediately a shout came from nearby. Her brother? No, he was in London. A gamekeeper?

Whoever the man might be, he was lurking here on purpose. So much for love, Philippe thought. Gloriana was just another lust-crazed woman trying to trap him into marriage. He turned and ran. Pursued by shouts and then shots, he reached his horse and galloped away. 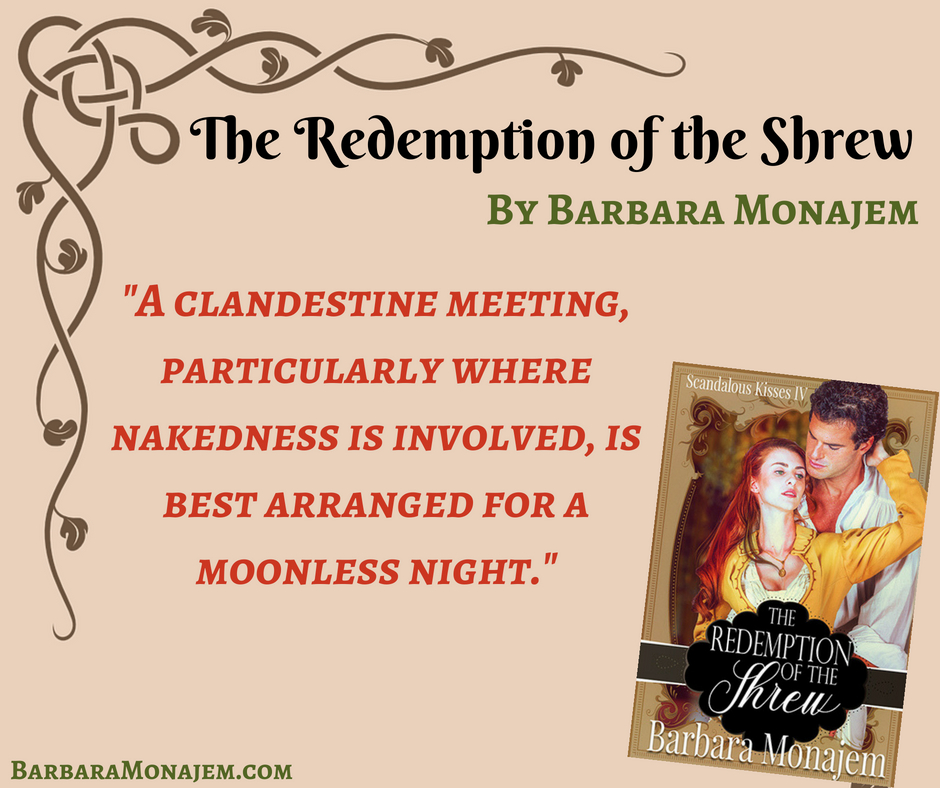 Winner of the Holt Medallion, Maggie, Daphne du Maurier, Reviewer’s Choice and Epic awards, Barbara Monajem wrote her first story at eight years old about apple tree gnomes. She published a middle-grade fantasy when her children were young, then moved on to paranormal mysteries and Regency romances with intrepid heroines and long-suffering heroes (or vice versa).

Barbara loves to cook, especially soups. She used to have two items on her bucket list: to make asparagus pudding and succeed at knitting socks. Asparagus pudding proved to be pretty horrible, and she is too fumble-fingered to make socks. Now she just sticks with writing books. She lives near Atlanta, Georgia with an ever-shifting population of relatives, friends, and feline strays. 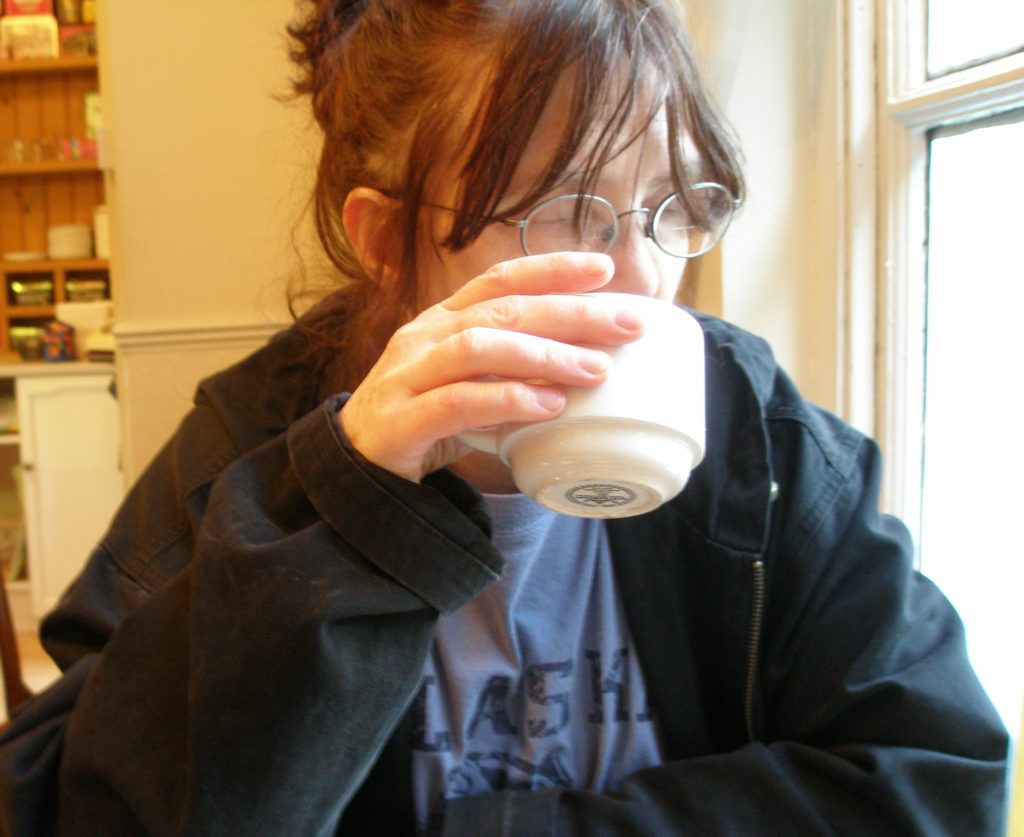