August 9, 2012   Tags: neurotic writers, psychology, self-help, the morning after, writing
Category: Blog, Inspiration   Comments Off on The Morning After

As you might have guest, I just finished a fairly substantial project last night and sent it out into cyber space. The bon voyage to said project did, indeed, involve the quaffing of wine and the eating of good chocolate along with much channel-flipping of Olympic highlights, all of which resulted in me getting to bed a little later than usual. Hubby was just back from a successful trip to Rotterdam, so I think you get the picture.

No doubt you’re waiting with bated breath to find out just which kind of morning after I’m having. Suffice to say, I’m not hungover.

Wine, sex, chocolate and the Olympics aside, what is it about the morning after for a writer that’s such a crap shoot of extremes? I’ve been 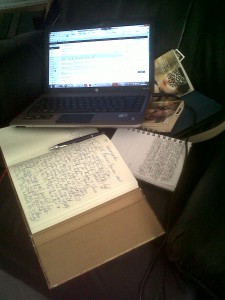 thinking about that a lot lately since there have been several mornings after in recent months. The thing about writers is that we’re constantly creating our own reality and peopling it with our own characters. Then, for the duration of anything from a short story to a novel, even to a trilogy, we literally live in that world we’ve created, spending huge amounts of quality time getting to know the characters who people it in intimate detail.

In a way, I suppose it’s like going on the best holiday ever complete with sexy encounters, fascinating people and larger than life adventures.

Then you come back home…

It’s more than that, though, it’s the letting go of something you’ve created, knowing that this is the end of an intimate encounter, that you really are saying good-bye. But on the other hand it’s also letting go of something that you’re proud of, that you’ve angsted over, sweated over and, if you’re like me, lost sleep over. It’s a happy send-off with a raised glass and some nice chocolate. But it’s never without a slight edge of fear and trepidation concerning the morning after.

The thing is, there’s a lot invested in that project by the time I’ve clicked SEND and closed down the file for good. The hours I’ve spent in the world I’ve created with those people I’ve created are substantial, and empty nest syndrome is inevitable.

I can’t count the number of times well-meaning folks have suggested to me that once I’ve finished a project I should take some time off, take a break, relax. But … Well it’s not that easy. Taking too much time to NOT write is a sure way to ‘neurotic’ myself out.

There’s always another major project waiting in the wings, and the best way I know to insure that I don’t mourn the loss too long is to get as heavily into the next project as quickly as possible.

The chocolate and wine and Olympic highlights are behind me now. It’s a brand new, sunny morning. So what will I do? Well, I have a novella to walk, or perhaps I’ll ‘garden it’ at the allotment. I have a whole new set of characters with whom to get intimate, new adventures to put them through. Best way past empty nest syndrome for a writer is to fill that nest again, as quickly as possible. Jeez! That doesn’t sound neurotic, does it???