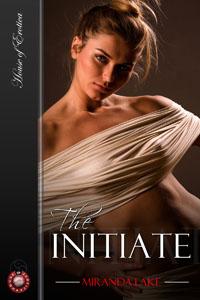 The Lady Hysena Macarydias, teenage daughter of the most noble house of Qalle, finds her illusion of how life will be as an Initiate at the formidable Citadel utterly shattered.

The excesses of Father Tarrip, High Priest of the Holy Prophet , would be beyond the endurance of the terrified girls in his charge were it not for the efforts of Sister Maria, who as an Adept of the secretive and forbidden Society of T’arn, is able to control him – but only to a degree.

But Maria has concerns beyond the fate of the pampered young ladies of Qalle aristocracy; the delicately balanced peace between the warring nations is under threat, and the very future of the planet may be in her hands.

The struggle for control of Qalle is a secret one, known to only a few. Caught between the opposing factions are the innocent Initiates: Hysena, the beautiful, intelligent yet naive Lady; Jagdig, the formidable warrior girl of Kallinia; plump Princess Leel of Calith; tiny, demure Silka of Sis Narash and the others.

And, somewhere within the sprawling walls and forbidding towers of the ancient Citadel, are the Acolytes, male counterparts to the Initiates, who in the timeless manner of young men everywhere will undertake any risk if it may result in the chance to meet young women, even if that risk may result in disaster…

The world of Qalle is a world of cruelty, of pain, of punishment. A world of plot, counter-plot and intrigue, but which still allows time enough for love, tenderness and yearning desire.

Xarrith was right, he reflected. Risk did make the blood sing, but what risk! He did not know what punishment would follow discovery on such an adventure, but had not been joking when he suggested to Xarrith that he feared for their very survival. His researches into the Citadel had offered hints of people entering the forbidding walls never to be seen or heard of again. Was a few hours of ecstasy worth possible death? As he watched the taller of the two naked girls, now lying on her back with her legs held high and wide by the one with the magnificent breasts and the holy sister bringing the tokan down directly on her spread vagina, he almost thought that it was.

As she plied the tokan between the open legs of Nephraan and heard her shrill scream as the whippy leather bit into her swollen labia, Sister Colya was wondering whether to order one (or both!) of the Initiates to lick her soaking cunt. With a grimace, she decided against this, knowing from experience that, while all of them would do this delightful service for each other, they hated to do it for their sister elder. Or at least this sister elder. She suspected that they showed no such reticence with Maria and felt a bitter pang of envy at the thought, bringing the tokan down with all her strength in her frustration.

Nephraan screamed even louder as the cruel device once again bit into her exposed sex.

The sound of the scream came clearly through the wall to the ears of the fascinated Tasnar. Unlike Xarrith who had seen punishments carried out on his people at home, in Sis Narash the though of treating another person in such a barbaric manner was anathema. He found the sight deeply shocking but even more exciting. Once again he applied his eye to the small hole in the ancient wall.