I’m very excited to have Gaie Sebold on SBTS today, and I’m especially excited because I got to read her fabulous  new novel, Babylon Steel, in its infancy when it was work-shopped in the well-known London genre writing group, the T Party. It was amazing then. It’s stunning now. Definitely one for the ‘must read’ list. Welcome Gaie!

It’s difficult to say where exactly the story of Babylon Steel started, except that years ago, and two novels back, I had a vague idea about a brothel that existed in a place that got a lot of very odd travellers passing through. I had some idea that it would be a sort of noirish comedy with the clients based on certain recognisable fantasy heroes; though with their names changed to protect the not-very-innocent. If I remember rightly, it started with the madam describing the house rules, which included such things as ‘No-one gets turned into anything without prior arrangement,’ and ‘Any payment that turns into leaves the next day will result in bits being broken off. Yes, those bits.’

This went into the ‘ideas I might do something with one day’ file, and is one of the very few things ever to come back out. There was already a trace of Babylon’s voice in the voice of the madam, but several more things had to happen before I could actually write the book.

I had to write a lot more first; and become more confident in what I was doing. Producing a novel that was good enough to get me an agent, although that one still hasn’t been picked up by a publisher, was a great help in boosting my confidence. But equally importantly, I had to develop my own ideas and emotions around sexuality. I was brought up in a fairly straightlaced household; my parents were very much of their era. Now, since they were both born in the 19-teens (I was a late baby) that era was about five minutes past Edwardian. They were good people, but it took me many, many years and some interesting and enjoyable experiences to shake off their ideas about sex and develop my own. Which, needless to say, ended up rather different. I moved from thinking of sex as something scary, and shameful, and done by women only under duress or in return for some form of social acceptance, into thinking of it as something that should be healthy, and celebrated, and done by women because they like it and they damn well want to.

Along the way, I took longsword lessons. I never got very good at it, but I did learn quite a lot about the realities of fighting with blades from 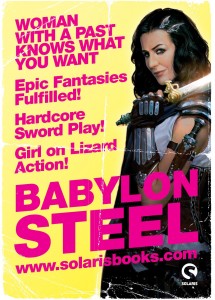 people who knew a great deal more than I did, and it helped to give me some of the real physical feel of fighting. I also got into live action role play (for those who don’t know, LARPing is basically dressing up as fantasy characters and running around in a wood hitting people with latex weapons. Or shouting spells at them if you’re playing a wizard). It’s immense fun, and even though, of course, it’s nothing like being in a real battle (the point is not to actually injure people, which is why the weapons are latex) it can be amazingly emotionally intense. I’ve been in tears; not just when a friend’s character ‘dies’ but when somebody does something noble and self-sacrificing. That probably sounds unhealthy! But it’s powerful. You can get a sense of emotional intensity, of clear right and wrong, which can be hard to come by in our often mundane and muddled lives. Also, of course, you get to hit people with stuff, indulge in the filthiest double-entendres in the history of language, and laugh yourself sick. At least you do with the bunch I play with.

All of these experiences contributed to the character and voice of Babylon. Then I read about the Sumerian goddess of sexuality, Inanna. I’d heard of sacred prostitution, and legends of temples where the women had to give up their virginity to strangers in the name of the goddess, but I didn’t know much more. The fact that Inanna was also a goddess of war helped push the vague ideas I had into shape, and the book began to coalesce. Of course, it went through a lot of changes. At one point I thought of basing the plot around Inanna’s descent to the underworld, one of the few written legends of Inanna that survives, but that got abandoned, as I was having too much fun with my own ideas. There are a few shadows of it that remain in Babylon Steel but you’d have to know where to look, I think.

And that, as best I remember, is it. Of course there was, undoubtedly, a lot of subconscious stuff that fed in from years of reading, and watching films, and being around people. And a lot of boring stuff where I wrote several scenes, hated them, kept one character and three paragraphs and trashed the rest, and so on and so forth. And the odd stuff that happens when characters you thought were minor turn out not to be, and characters you thought were the bad guys are, at most, morally ambiguous. But that is not so much about the genesis of a story as its maturing. Not sex, but pregnancy. And that’s a whole other subject.

We girls, sprawled on cushions in a silk-hung room. Shakanti seated in the corner, impatient. And our new trainer, a graceful and soft-voiced

woman in linen the clean blue of a spring sky. She had assistants with her, two young men, two young women, in loose white robes.

“My name is Livaia,” she told us. “I am here to teach you how to give pleasure, and how to receive it. It is something that almost anyone can learn to do with some degree of craft, and that is well enough. However, it is the subtleties which transform craft into art. Subtlety, the capacity to take that extra care, is the mark of the true artist.”

She beckoned forward one of the young men. He was very handsome, with the sculpted body of an athlete and a gentle smile.

“First,” Livaia said, “is anyone here still virgin? Come, there’s no need to be ashamed.”

I happened to glance at Shakanti, who was glaring, and looked away fast.

Renavir’s hand went up, spearing the air. She, too, glanced at Shakanti – seeking approval, poor child. Then, after a moment, Velance’s hand went up, too. Neither of them surprised me.

“Then we shall start with the basics.” She gestured the young man to take off his robe. There were gasps and giggles – most of us had, of course, at least seen a cock before, but not in such circumstances. “Now,” she said, “I will show you how things work, and then, we shall move on to making them work better. Jalis here is in no need of encouragement, as you can see. I think being in the presence of so many pretty young ladies has had an effect on him. But sometimes encouragement is required.”

She took him in hand, so to speak, and so our first lesson in the heart of the seductive arts began.

Growing up as I had, crammed in among the other servants, and later out with the caravans, I’d had neither the time nor the inclination to be especially modest, though with Sesh and Kyrl watching over me like a pair of mother hawks, I’d remained virgin until Hap-Canae. I enjoyed the lessons. When it moved from demonstration by Livaia to the point when we had to take part, I was more than ready. Watching people seduce each other did nothing to damp my own fires, and when it was my turn to sink into the cushions with Jalis, Livaia had to coach me not to take things too quickly.

Jalis. My second lover. Gentle, adept – not, perhaps, overburdened with brains but exquisitely good at what he did. My own responses surprised me: I had thought things with Hap-Canae were marvellous, and was surprised to discover that they could be much more so.

I began to realise that Hap-Canae’s bedroom techniques lacked a certain something. I tried not to think about it. Of course, I wouldn’t dream of telling him, or suggesting that he pay a little attention to my own pleasure as well as his. After all I was, still, so grateful.

Where to find Gaie Sebold:

The Initiate: Hot New Read by Miranda Lake → ← Two Helpings of Nasty Readings with a Side of Spanking, Please
© 2022 K D Grace
Site created and maintained by Writer Marketing Services