Suzanne Portnoy Talks About the Re-Release of her Bestselling Memoir, The Butcher, The Baker, The Candlestick Maker 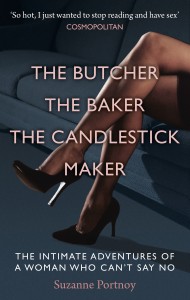 SP: It was 2005 and I was sitting at my desk in the PR agency I managed. My boyfriend, an alcoholic, had passed away a year earlier. I was sleeping with a portfolio of about half a dozen men and was very involved in the swinging scene, having decided that I didn’t want a serious relationship of any kind. I remember thinking I’m 44 years old.  If I don’t write down how I came to be this person, I’ll forget it all and nobody will believe me. I started writing the idea down as a series of short stories but, eventually, under the guidance of Adam Nevill at Virgin Books, it became a memoir.

KD: I understand that after the Fifty Shades phenomenon, Random House decided it was time to re-release The Butcher, the Baker, the Candlestick Maker. I have to ask, how would you compare your memoir to 50SoG, and how do you think readers of 50SoG, newbies to erotica, will respond to TBBCM? Isn’t it a bit like comparing apples and oranges?

KD: Suzanne, tells us a little bit about yourself and about your career.

SP: I started out in film production and went into PR after the birth of my second son. I’ve been a publicist for over 20 years working with a variety of clients. I never had any dreams of becoming an author. I wrote ‘Butcher, Baker’ for myself as much as for others.

KD: Since The Butcher, the Baker, the Candlestick Maker is a re-release, how has your life and your world view changed since it was released the first time?

SP: It’s funny you should ask that. When Random House told me they were republishing the book, I had mixed feelings. I was very proud of having written it and happy that it might find a new audience. But my life is very different now. I have had a lovely boyfriend for a couple of years now and we have a very ‘normal’ relationship.  When I look back on some of my sexual experiences, I can see that I was quite lucky that I escaped being raped or even dead on a number of occasions. That’s not to say that I didn’t have a lot of fun too. There are many scenarios that I’ll always remember as being some of the most amazing sexual experiences of my life and I met some fantastic people along the way, many of whom I still keep in touch.

KD: Since The Butcher, the Baker, the Candlestick Maker is a memoir, was it difficult for you to expose your private life so publically? What was the most challenging part of such a public exposure of your private self? What was the inspiration for doing so?

SP: I was incredibly naïve when I wrote ‘Butcher, Baker.’ I didn’t think of the implications or how it might impact on my life. I remember Adam Nevill telling me that the likelihood of it being a bestseller was very rare; that hundreds of thousands of books are published every year and very few of them sell in big numbers. At the time we were negotiating my very small advance so I can see his rationale for being so negative but, even so, I didn’t think ahead! Like I said, I had a burning desire to tell my story and, being a publicist, a number of media contacts whom I hoped would support me by writing features about the book. I knew that I would do whatever I needed to do to make sure it was successful because that’s my nature.

When ‘Butcher, Baker’ went to number 20 on Amazon, I was delighted. I was still very much involved in the swinging lifestyle so I became a bit of a celebrity in that world. It was all a bit surreal. ITV wanted to do a one-hour documentary on me (that I turned down) and, for a while, I became the ‘go to’ girl for anyone seeking an opinion on sex. It was all great fun and I must admit I enjoyed the attention.

However, as I got older, I came to a point where I had had enough of swinging and, thankfully, that coincided with meeting my partner. Being Suzanne Portnoy was fun but it wasn’t someone I wanted to be forever.

KD: Do you think reader response and attitude toward the author is different with a memoir than it is with fiction? How?

SP: As an older woman, I know that my story resonates with many women who have had children and find themselves in an unhappy marriage. I’ve had many letters over the years from women and men who have been inspired by my story. People have written to me to tell me that they now have a more fulfilling sex life with their partner as a result of reading ‘Butcher, Baker.’ I know I have inspired other women to go out and try swinging. I’m sure that erotic fiction can inspire couples and singles to do the same but I think it’s easier for people to make that leap when they read about someone who has already done so.

KD: In your opinion how have times an attitudes toward sex changed most since The Butcher, the Baker, the Candlestick Maker was released the first time, and how would you, as a publicist, expect that to change the way the book is received?

SP: As a publicist I can see that 50 Shades has made it much easier for the mainstream media and the public to talk about sex. Certainly more people are reading erotica than ever before. 50 Shades has given a tremendous boost to the genre and the adult industry in general. Whether that particular bubble has burst remains to be seen. I’m not expecting the same kind of reaction to ‘Butcher, Baker’ now as it had back in 2007. I think the market is almost saturated, though I haven’t seen a book similar to ‘Butcher, Baker’ in the charts. Random House have done a great job so far – the book has a fantastic new jacket and I’m confident they are doing all they need to do to make sure it sells.

SP: Being cynical, I think every year there is one genre in publishing that sets the trend. It could be misery memoirs or gothic horror or erotica. I think what has been interesting about 50 Shades is to watch how it transitioned from being on a fan fiction site to an independent publisher and, eventually, being picked up by a major. The world of publishing is changing rapidly. Fifty Shades opened reader’s eyes to the genre and it’s up to the publishing industry to keep pushing out good books and marketing them properly to keep up the demand.

KD: Are there plans for another book? Memoir? Fiction? Other? What exactly does the future hold for Suzanne Portnoy?

SP: I always have my fingers in far too many pies but writing another memoir isn’t on the cards for now. I wrote a play called ‘Looser Women’ with playwright Tim Fountain that went to the Edinburgh Festival a couple of years ago and I still think about reworking it for a regional tour. I’m working on a tech idea that has been growing in my brain for a while (I’m a secret geek) and I want to see how far I can take it. I have a number of clients on the PR side that I juggle too and I’m renovating a flat from the ground up. Maybe when I have a chance to breathe I’ll feel the urge to write another book to complete the trilogy but not just yet.

Buy The Butcher, the Baker, the candlestick Maker here:

It’s no Secret. It’s FREE! The Secret Life of Pets that is! → ← Elemental Fire Blog Tour: Join Me for the Heatwave
© 2022 K D Grace
Site created and maintained by Writer Marketing Services